What a Wild Ride It's Been

Climbing walls come under new scrutiny after rash of accidents. 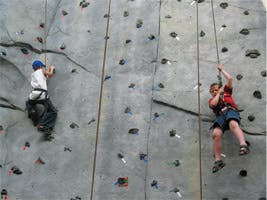 Climbing wall When Stacy Sarrette of Saugus, Mass., died at 24 last May, few people in the recreation industry knew that her death accelerated a regulatory assault on climbing walls. Part of the reason is that Sarrette died after falling approximately 20 feet not from an indoor rock climbing wall but from a portable, inflatable amusement park ride set up in a parking lot. In front of her sister and other relatives, Sarrette fell during a local radio station's "Rocky Mountain Inflatable Challenge," bounced off the inflatable skirt at the base of the "wall" and onto the parking lot pavement. She died from her injuries three days later.

Even before the inevitable lawsuit was filed, however, the Massachusetts Department of Public Safety was on the case. DPS Commissioner Thomas Gatzunis had previously put the carnival industry on notice after a 2004 accident on a mechanical ride killed a 38-year-old Massachusetts man, and now the Sarrette incident led Gatzunis to swiftly issue emergency regulations specifying that all climbing wall operators would now be subject to licensure and annual inspections.

It was a move that caught virtually everyone in the state who owns a climbing wall flat-footed. As hearings were scheduled for later in 2005 and the state superintendent of schools received a letter advising him of the new regulations, climbing wall companies and end users alike began peppering the DPS with phone calls. A license? Inspections? What?

The Climbing Wall Association (CWA) and its executive director, Bill Zimmerman, were joined by the Association for Challenge Course Technology (ACCT) in questioning the logic behind the new regulations. Essentially, they argued, a climbing wall is fundamentally dissimilar to a mechanical carnival ride.

"Our argument was based on the type of use, not the structure," Zimmerman says. "We said, where a facility takes on the attributes of an entertainment venue, it should be regulated as such. But climbing is a human-powered recreational activity - in short, it's a sport."

The DPS, however, saw things more simply, preferring not to have to make determinations about every facility that it hoped to license. And so, the climbing wall industry representatives came to a December meeting to ask the DPS for representation on the board that would write the new regulations. But no members of the already unwieldy, 19-member board wanted to give up their seat.

To Gatzunis' credit (he did not respond to AB's interview requests), he recognized that the problem was not going to go away. And that is how a Jan. 5 meeting came to take place between Gatzunis; Beth McLaughlin, the DPS legal counsel; Mark Mooney, the DPS assistant chief of inspections; two representatives of the ACCT; and owners of Project Adventure, a maker of challenge courses. The group went to a school that had both an indoor challenge course and a climbing wall, and observed the climbing facilities in action.

"They basically gave the commissioner an orientation to the facility, and told him, 'Here's how it operates, here's how it's supervised, here's how people use it,' " says Zimmerman. "He said, in essence, 'Yeah, I understand now.' They didn't get it in writing, but he said it."

Climbing walls in schools, health clubs and other supervised facilities might be dropped from the Massachusetts regulations, but don't expect a collective sigh of relief from climbing wall owners and manufacturers. Climbing walls have been targeted by several state inspections bodies, including one in Missouri, where a 22-year-old woman fell to her death after a frayed cable on a portable climbing wall snapped in 2003. The CWA recently was contacted by the Illinois Carnival Amusement Safety Board, which wrote that as a result of the Massachusetts case it intends to include climbing walls in its inspection program. The letter noted that the board currently targets "carnival rides, trams, ski lifts, moon walks, go-karts and anything else that the public 'rides on' for amusement, provided it is open to the public."

"Is it over? No," Zimmerman says. "We got them to agree we're not amusement parks, but the commissioner is still intent on regulating our industry." In January, the DPS informed the CWA that it has until the end of this month to draft legislation that would achieve the goals of the DPS and submit it for the department's review. Under the circumstances, the CWA is happy to have the opportunity to help determine how its clients will be regulated in Massachusetts.

Climbing industry representatives continue to insist that the climbing that takes place in schools, clubs and gyms doesn't fall under the heading of entertainment, and there has been some anger and bewilderment over the increased scrutiny. Many climbing enthusiasts have noted with disdain that these deaths have occurred at poorly supervised events that don't attract "real" climbers. Zimmerman, though, believes that to an extent the industry is a victim of its own success.

"Non-climbers' expectation of their personal safety and personal responsibility are not the same as climbers' ethics - 'I have to be knowledgeable and self-sufficient, exercise good judgment and personally acknowledge the risk,' " he says. "The mom taking a dozen 10-year-olds to the climbing gym for a birthday party isn't willing to take those risks, and arguably shouldn't be asked to. As climbing becomes more accessible to the public at large, the public's expectations of us change. And we need to respond to that."