Massachusetts lawmakers hope a proposed bill will help student-athletes behave better on and off the field. 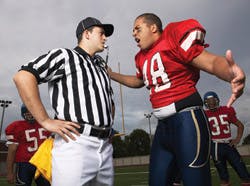 Ill-tempered student-athletes who lose their cool in the heat of competition also tend to lack self-control in other aspects of their lives - leading to violence, addiction, eating disorders or bullying. At least that's the premise of a bill working its way through the Massachusetts Legislature that promotes the teaching of self-control to young athletes in high schools, middle schools and youth sports organizations.

House Bill 4479, introduced by Rep. Patricia Haddad (D-Somerset) and co-sponsored by 14 other legislators, calls for the state to invest money in a pilot program in which the Department of Mental Health would oversee a committee of sports, medical and education professionals responsible for developing what Haddad calls "a science-based curriculum to teach self-control and sportsmanship." The voluntary program would likely use a short textbook to help kids learn how to change thought patterns, create positive environments, set goals, and visualize and perform task orientation. Ideally, it would also provide guidance for athletic directors, youth sports administrators, coaches and parents. The potential cost of this endeavor has not been determined.

"Athletics can teach our students very important, valuable life lessons," Haddad, co-chair of the state's Joint Committee on Education, said in a written statement provided to AB. "We hear too often of issues arising in athletic competitions that are the result of students losing their cool. I filed this bill to start a conversation. We need a way to promote better sportsmanship."

Athletic directors and coaches around the state, already pressed for time and resources, have greeted the proposal with some skepticism. "We've endorsed the bill. The concept is great. Self-control is a life skill that needs to be taught, and we're in the business of educating," says Phil Vaccaro, chairman of the Massachusetts Interscholastic Athletic Association's Sportsmanship Committee and director of athletics and student activities at Reading Memorial High School. "But we need to be careful what we legislate. As it is, coaches are overburdened."

The Boston Herald weighed in with an editorial condemning lawmakers for attempting to "reach down into the classroom or onto the playing field to try and legislate good behavior." Ron Chimelis, a columnist for The Republican in Springfield, Mass., went even further. "Let kids be kids again," he wrote, "instead of loading them up with complex psychological issues that can turn every kids' game into a social experiment."

Even if Haddad's bill doesn't survive (as of this writing, the state's Joint Education Committee recommended that it be studied further), the conversation it started will likely continue.

"How do you argue against teaching self-control to children?" asks Mitch Lyons, executive director of the Massachusetts-based nonprofit organization GetPsychedSports.org and one of HB 4479's most vocal proponents. "Let me ask that question another way: Why don't you want to teach it? Sports psychology has already been proven to help kids play better."

Lyons encouraged another state representative in 2005 to introduce legislation that would have required sports psychology to be taught to all middle and high school student-athletes in the state (see "Attitude Adjustment," Sept. 2005, p.32). Upon realizing the unlikelihood of mandating such education, he says he requested the proposal be withdrawn and helped begin "the process of building a more doable piece of legislation, which is House Bill 4479."

"I would like to see it pass, so that monies would be given to a committee that could come up with a curriculum - although that will be difficult," Vaccaro says, stressing that the curriculum must remain voluntary. "But it's relatively easy compared to the next step, which is getting it implemented."

Because Haddad's legislation also has the support of the Northeastern University Center for the Study of Sport in Society, Mass Youth Soccer and the Family Violence Prevention Fund, Vaccaro suggests that a pilot program at the youth level might be a better starting point for teaching self-control. "It's like math class," he says. "You start off doing addition, subtraction, multiplication and division in elementary school, then move to pre-algebra in middle school, and algebra and algebra 2 in high school. It's progressive learning that moves to other levels as kids get older and their knowledge improves. By the time student-athletes get to high school, they should understand what the expectations are for their behavior."

At Reading Memorial, a handful of coaches already incorporate sports psychology into their team tactics, using GetPsychedSports.org's methods. Vaccaro says it's key that his coaches understand how important good player behavior is to the school's reputation. "What this legislation has identified is that self-control is a skill," he says, and HB 4479 has at least made state residents aware of that. "We're not born with good sportsmanship; we develop it."

Despite his determined efforts to help move Haddad's bill forward, Lyons - a former lawyer and long-time basketball coach at several levels - says he's aware of the challenges any new education program could pose for high school athletic directors and coaches.

"My response to that is, even though there is a learning curve involved, it will make the job of an athletic director so much easier," he says, adding that GetPsychedSports.org has not yet been asked to help develop the proposed curriculum. "Imagine if you could just hand parents a booklet and say, 'Look, we're teaching your kids how to be positive.' But it's hard to get people to see long-term gains. What we're trying to do is capture the message of sports and use it to benefit our society as a whole. But this is in the state's hands. All I'm doing is advocating for it, and sometimes you have to make people angry in order to make them move. I know there are many, many ADs in Massachusetts who hate what I am doing."

Vaccaro, for one, harbors no animosity toward Lyons, Haddad or any of the bill's supporters. "I don't want to be negative about this, because I really believe in it," he says. "Let's start it and just see where it goes."