Evidence Suggests Marijuana Use Is Up Among College Student-Athletes

In June, federal prosecutors in Alexandria, Va., snuffed out a $2 million drug trafficking ring that allegedly recruited student-athletes to market California-grown marijuana on college campuses in Virginia and 10 other states. 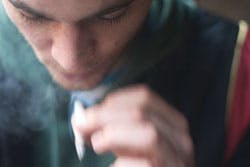 Observers aren't sure just how big a problem marijuana poses for college athletics.

In June, federal prosecutors in Alexandria, Va., snuffed out a $2 million drug trafficking ring that allegedly recruited student-athletes to market California-grown marijuana on college campuses in Virginia and 10 other states. Less than a week later, the NCAA's latest post-season drug testing results made the media rounds, with positive tests for marijuana at championship events increasing in all three divisions from 28 in 2008-09 to 71 the following academic year.

While that number amounts to only 3 percent of the tested sample, collegiate athletics insiders contend that the actual percentage of student-athlete marijuana users is much higher. The NCAA performs random in-season tests for performance-enhancing drugs, but leaves in-season testing for so-called "street drugs," including marijuana, up to individual member schools. Says NCAA spokesperson Gail Dent, "The membership has supported testing for marijuana at NCAA-governed championships in order to keep the championships drug-free, and has retained the authority to conduct institutional testing for marijuana, as members believe this issue is better handled locally."

The issue has been smoldering for some time. Last year, Sports Illustrated reported that nearly a dozen first-round prospects in the 2010 NFL draft were known to have marijuana use in their past, leading one team personnel official to term the situation an "epidemic." This past college football season saw marijuana arrests affect the programs at Florida, Oklahoma and Notre Dame.

Few schools have been confronted with the issue more than Washington State. In May, Louis Bland became the third WSU football player busted during the 2010-11 academic year. Last October, two teammates were arrested when an unrelated search warrant turned up 38 marijuana plants growing in the basement of a house the players rented.

But the problems in Pullman weren't limited to one sport, as three starters on the men's basketball team faced separate suspensions for pot possession this past season. Junior center DeAngelo Casto sat out the Cougars' quarterfinal appearance in the National Invitation Tournament and later announced that he was leaving school to pursue a career in professional basketball.

Mere one-game suspensions pale in comparison to the NCAA's penalty for a positive post-season marijuana test, which stands at one year following a June review by the association's Committee on Competitive Safeguards and Medical Aspects of Sports. While preliminary research indicates that the majority of student-athletes who test positive for marijuana continue their education, the NCAA also reports that only eight of 56 student-athletes who tested positive between August 2007 and July 2009 returned to their teams after serving the one-year suspension. When asked if this is a desired outcome, Dent says, "The NCAA bans marijuana use and maintains the strict penalty as a strong deterrent, and this penalty has been supported by the membership through biennial surveys. Other factors may be at play as to whether the student-athlete returns to play."

WSU head athletic trainer Bill Drake can't say whether the marijuana arrest played a role in Casto's decision to forego his senior season. (The case for prosecution on drug-possession charges fell apart based on how evidence was obtained.) Drake takes a bigger-picture approach to the problem. "I'm in health care, and so I try to take into account how we can best help this person with his or her health," he says. "We talk about it from a health perspective and give the student-athlete opportunities as a young person to change that behavior."

Still, the question remains why student-athletes use marijuana in the first place. Drake admits that while arrests involving student-athletes are more apt to receive media attention than other campus incidents, he recognizes that student-athletes are under an inordinate amount of stress. For relief, some may turn to marijuana, which doesn't require proof of age to obtain and doesn't carry the same morning-after hangover as alcohol.

Moreover, as marijuana gains greater acceptance in medicinal applications, student-athletes may be relying on the drug for pain relief. That prospect leads to still more questions. "Are athletes still using marijuana even though they've been concussed, and does it have any kind of effect on neuropsychological testing?" asks Thompson. "That's hard to test, because you have to get an athlete to admit, 'Yeah, I'm using marijuana.' But when an athlete who's been concussed is going through the testing process and seems to be struggling - and you believe that this athlete is a marijuana user - a red flag goes up."

How big a red flag the recent evidence - anecdotal and otherwise - of marijuana use among college student-athletes should represent remains unclear. Data from the NCAA Study of Substance Use Habits of College Student-Athletes, gathered every four years, is available only through 2005. Dent says the 2009 report is being reviewed and so has not been released. For now, even the association's most recent post-season testing results can be considered inconclusive. "The fact that the number of positive tests is up may be a concern," says Thompson, who adds that he has begun to question the testing-as-deterrent theory. "Marijuana is absorbed in the fat, so the cannabis will stay in your system for up to a couple weeks. If you're careful and say, 'I'll go a couple weeks without using marijuana because I know I'm going to the playoffs and there's a chance I'm going to get tested,' you certainly can get around the test. If you are testing positive, that's pretty ridiculous and pretty sloppy on your part."

That said, Thompson anxiously awaits another round of numbers. "The NCAA season is over. How hard is it to put the numbers together?" he asks. "It should not take two years to put the numbers together for a particular year - 'We did so many tests, we had so many positives.' They know how many positives they had, because they had to deal with them all."