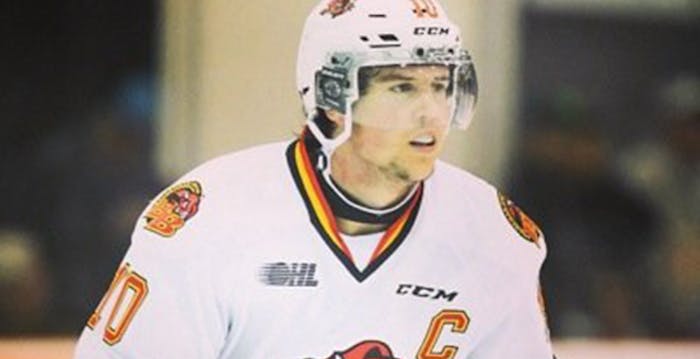 The Belleville Bulls' Jake Marchment. Photo via @JMarch11 on Twitter.

Jake Marchment and Greg Betzold certainly aren't the first athletes to get in trouble thanks to social media, but they are the latest. (At least that we know of.)

The Ontario Hockey League, a major junior hockey league, has suspended Marchment of the Belleville Bulls and Betzold of the Peterborough Petes for 15 games for violating the league's social media policy. The suspensions come after screenshots emerged of conversations Marchment, a 2014 sixth-round pick of the NHL's Los Angeles Kings, and Betzold had with young women on the matchmaking app, Tinder.

The language the players used was vulgar and abusive. The players referred to the women as "ugly" and "dirt balls," among other things not fit to be published here.

Marchment later tweeted an apology for his actions saying:

In the past 24 hours there have been some comments made about my teammate Chad Heffernan. I would like to make it very clear that these comments were made by myself on his cell phone, not by Chad. Even though it was a private conversation, my comments were inaproriate [sic], disrespectful, and I accept full responsibility for my actions. I have embarrassed myself, my teammates, the Belleville Bulls organization and the city of Belleville. I truly apologize for my actions.

His apology wasn't good enough for the OHL, with commissioner David Branch suspending the two players and issuing this statement on Wednesday:

The OHL takes issues related to respect, diversity and harassment very seriously.  The social networking conduct displayed by these players goes against what the League stands for and serves to highlight a sense of entitlement that we, as a League, have worked hard to try to eliminate.  We believe these suspensions, going forward, will reinforce to our players that all activity, be it in person, on the ice or online, must be in keeping with our policies.  These events further illustrate that the League and our teams must continually work with our players to ensure they understand and appreciate our social networking policy.

The story serves as a reminder that when it comes to apps and social media, nothing is ever truly private. This seems like a good time to review our 9 social media dos and don'ts for student-athletes.