Strength Training Boosts the Strength and Spirit of Cancer Survivors

Many cancer survivors take up strength training in hopes of keeping the disease at bay. 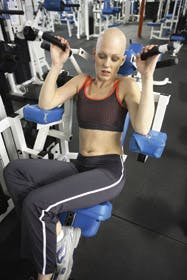 There's a certain "Come to Jesus" mind-set that develops in people who have lived through the ravages of cancer and its treatment, says Eric Durak, an innovator in cancer survivor wellness programming. It's marked by two recurring thoughts: "How did I get cancer?" and "Is there anything in my life that I can change to reduce my odds of getting cancer again?" Answers to the second question can vary greatly, Durak says, from meditation and spirituality to macrobiotic diets and coffee enemas. "Whatever it is, if they can be convinced that exercise and strength training is one of the top recovery tools, so much the better."

Indeed, some of the most common symptoms plaguing cancer survivors during and after treatment - which often includes radiation and chemotherapy - are loss of physical strength, extreme fatigue and depression. Since the mid-1990s, Durak, president of the Santa Barbara, Calif.-based consultancy Medical Health & Wellness, has been championing exercise and strength training as a means to negate such symptoms and perhaps even ward off recurrences of the disease.

And while strength-training programming dedicated specifically to cancer survivors has been slow to take off in the fitness industry, hospitals and wellness centers continue to embrace the concept, either by finding funding for in-house strength training classes or by sponsoring a patient by paying his or her health club dues.

"We're seeing hundreds and hundreds of centers across the U.S. that are using a combination of free weights, strength machines and equipment such as resistance bands for their cancer programs," says Durak. "What it comes down to is the quality of instruction they get."

Programming strength training for a group of cancer survivors can be difficult, as each person may be physically limited by factors such as age, fitness level and cancer- or treatment-related symptoms. Durak suggests cancer survivors collectively should be utilizing the wide range of strength-training equipment available in many wellness centers and private clubs. "We have such wonderful tools right now in the industry," he says. "There's no reason, if I'm a cancer survivor, that I wouldn't want to get the most out of all of them."

In many programs, a single instructor must try to design individualized workouts for an array of patients, many of whom may be brand new to a gym environment, let alone strength training. Jan Hertzfeld, health and fitness director for the Mesa (Ariz.) Family YMCA, began running strength and exercise programs for cancer patients and survivors four years ago. Patients usually come to the Y programs at their doctor's suggestion. Once there, they meet individually with an instructor before joining together in classes.

"They like working out together. They provide support and motivation for each other," Hertzfeld says. "They're all in the weight room at the same time, but they're doing different sets, reps, and so on, all while being supervised by the fitness staff." Certain cancer patient-specific rules do apply, says Hertzfeld, such as no chest presses for people who've had surgery for breast cancer.

Hertzfeld says Ys, Jewish Community Centers and other community-based facilities make good environments for cancer patient strength-training programs because they can keep the programs' costs down and because survivors often feel tentative in commercial club environments. Many cancer survivors interested in buffing up may not be able to afford even minimal fees for a structured strength program.

That's something many people in the emerging field of cancer survivor research, including Ohio State University's Catherine Alfano, deplore. "If you have a heart attack, then you're going to go through cardiac rehab," says Alfano, an assistant professor at the university's College of Public Health. "Everybody does - their insurance pays for it." Alfano doesn't take issue with cardiac rebuilding. Rather, she'd like the medical and insurance fields to extend the same type of "no questions asked" thinking to cancer survivors, who more studies are showing can build and maintain a higher quality of life through regular cardio work and strength training. "It's a double-standard," she says.

A researcher within the OSU Cancer Control Program, Alfano recently published a study of 500 breast cancer survivors who were surveyed about their levels of physical activity and their corresponding quality of life before diagnosis and during the following year. Alfano says she was somewhat surprised by the results. "We thought perhaps that the people who were in better shape before they went through their cancer treatment might have fewer symptoms afterward - that wasn't the case." That's not necessarily bad news, since the study also showed that post-diagnosis physical activity lessened symptoms - such as fatigue, sleeping problems, sexual problems and depression - often shared by cancer survivors. "What this means is that what people did before they were diagnosed is kind of irrelevant," Alfano says. "It's what they do from that point on that matters."

Alfano is one of many researchers searching for clues to the causes and effects of cancer's many forms. "One of the things we don't know - outside of a few studies - is the contribution that strength training, as opposed to cardiovascular exercise, might make toward recovery and prevention," she says. "I, of course, think it's all positive - but you never know."

Durak, meanwhile, remains convinced. "I still believe that strength training is a very important part of cancer recovery," he says. "There's no doubt in my mind."