The most chilling among the seemingly endless string of discussion forum entries on the LaSalle Bank Chicago Marathon web site came from a race participant who had struggled to maintain a five-hour pace in the record 88-degree heat of Oct. 7. "I was jogging on the left side of the course when I saw this man collapsed on the side of the road. It was very apparent that he was already dead, and it really shook me up," she wrote, referring to Chad Schieber, a 35-year-old police officer and father of three from Midland, Mich., who went down near mile 18 of his first 26.2-mile race. "Seeing Mr. Schieber made me realize that there are a helluva lot more important things than finishing a marathon." 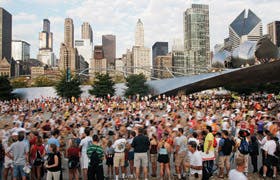 Race organizers came to the same realization, halting at the halfway point much of the 35,000-runner field (the heat discouraged nearly 10,000 additional runners from starting) and later ordering those still on the course who had yet to finish to stop. That decision, the first contingency of its kind in the 30-year history of the Chicago Marathon, brought both relief to and outrage from runners. Despite 49 participants requiring hospital attention and hundreds of others treated on-site for heat-related illness and injuries, many runners, each of whom paid a $110 entry fee, resented being denied the chance to finish. (It would not be known until the following day that Schieber's death was caused by a pre-existing heart condition, and not necessarily the heat.)

The overarching complaint, though, was the seeming lack of preparation by race organizers for the unseasonable weather conditions - which, frustrated runners were quick to point out, had been forecast days in advance. Race materials had assured participants of ample support in the form of water and calories along the course, but many considered that an empty promise shortly after they had embarked.

Runners reported aid stations overwhelmed or simply gone - paper cups strewn about the pavement the only evidence of their prior existence. Some runners phoned friends to bring them water at rendezvous points, while others ducked into convenience stores to purchase bottles for themselves and fellow competitors. At least one race entrant was seen drinking out of a fountain in Lincoln Park. "I ran my last Chicago Marathon today," wrote another individual at abcnews.com. "The real reason so many runners went down was a direct result of the lack of support from the organizers. I resorted to a discarded water bottle, water hoses and the kindness of spectators to keep myself and my running partner hydrated." 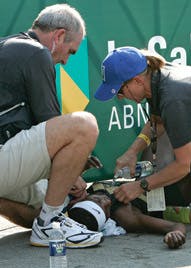 Race organizers insisted that enough resources were on the course, admitting only to possible distribution issues. Carey Pinkowski, the Chicago Marathon's executive director for the past 17 years, did not respond to AB's interview request. However, his statement to participants on the race's web site read, "As an organization dedicated to providing the very best experience in the industry, the results have left us disappointed, as well. Our team has spent the last several days reviewing the details and we are listening to runners, staff and volunteers. Rest assured that we take the day's events - and your comments - seriously." New York City Marathon race director Mary Wittenberg, who was in Chicago, told The New York Times, "The heat and humidity soared beyond what anyone expected. At the beginning of the day, it looked like it would be fine. It was an act-of-God kind of day."

An act-of-God legal defense (a class-action lawsuit was being discussed on the post-race forums as of this writing) could be a reach for race organizers, according to attorney John Wolohan, associate professor of sports law at Ithaca College and a regular contributor to AB. And while participants must assume some risk in running a marathon - even in ideal conditions - the issue of aid stations not providing support as advertised is a "troubling" one. "In order to assume a risk, I have to know of it," Wolohan adds. "As a first-timer, I might not know the dangers. Therefore the race has a duty to inform me of the risks." That said, waivers signed by participants may ultimately keep race organizers out of court, Wolohan concludes, unless participants can present evidence of gross negligence.

When asked if marathons have become too welcoming to the novice distance runner, Kris Hinrichs, a veteran of 65 marathons and race director of Milwaukee's Lakefront Marathon (staged the same day as Chicago's this year, in 84-degree conditions), says, "I hate to say that, because 15 years ago, I maybe wouldn't have been welcome at a marathon. Maybe what we need as a sport is to somehow separate running and walking marathons and their levels of support. We're a runner's race, put on by runners. We provide a very high level of TLC for the runner, but we simply cannot provide walkers with the same service."

Hinrichs this year extended her race cutoff time by 30 minutes to encourage runners to take a moderate approach to finishing (all but 100 of the 1,800 race participants did). Eleven of 13 aid stations were supplied continuously with municipal water, and all were stocked with copious amounts of ice. Four extra buses, or "sag wagons," were on hand to shuttle struggling runners, and additional ambulance support was available at the 19-mile mark. On-site medical staff even filled an immersion tub with ice water, though it wasn't needed. "We actually had fewer medical transports from our finish line and fewer IVs than we did last year, when the temperature was much more moderate," says Hinrichs, whose medical team advised participants about hydration strategies in race packets, on the race's web site and during starting-line announcements. "The runners paid attention."

As for the events that transpired 90 miles to the south, Hinrichs is hesitant to judge Pinkowski. "My guess is he made the best decision that he could based on the circumstances that were before him," she says, noting that her course didn't traverse an "urban heat island," as Chicago's had. "I think another part of the problem is scale. I get a bunch of extra cups, Gatorade and ice. He had 20 times the number of people to deal with than we did."