Troubled economy or no, one community's commitment to soccer continues. 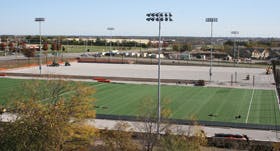 It may seem like an odd time - especially for a municipality - to assume new debt, but city leaders in Overland Park, Kan., are taking a long-term view of a bond-funded $36 million soccer facility. "The commitment the city council made to go forward with this project was obviously made prior to the recent economic problems," acknowledges Mike Laplante, manager of the facility's operations. "But at the same time, the upside to the constituents that it serves and to Overland Park is so great. The most common thing you hear is that there are never enough fields for kids to play on."

By the time the complex opens in September, that complaint ought to be firmly quieted. With 12 competition-size fields, portable bleacher systems, three concessions buildings, a 16,000- square-foot field house and administrative building, a 2,000-square-foot meeting room, and offices for referees and tournament coordinators, the facility should not only serve the suburb south of Kansas City, but also the greater Kansas City area.

It had better, and more, say city officials, who approved the project as part of a larger $65 million bond that also covers relocating and reconstructing several holes of a city-run golf course, a skate park, a basketball court and three tennis courts. If the current nationwide economic climate weren't cause for enough spending-related anxiety, there's also the fact that voters in Johnson County, which encompasses Overland Park, just two years ago rejected a referendum that would have provided a similarly sized recreational soccer facility.

So why did the Overland Park City Council move forward with the project? "There's still a need here," says Overland Park Leisure Services manager Tony Cosby, noting that the city and its neighboring suburbs boast some of the highest per-capita youth soccer participation rates in the United States. "The city knew it had the ability to do this type of project in a different manner, so they took it on right after the failure of that bond issue. Within not much more than a year, we were in construction." 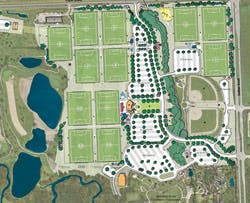 In total, the facility will feature more than 1.2 million square feet of synthetic turf. "There is no other facility in the country that we are aware of that has this many synthetic soccer fields," says Laplante.

The decision to go all-in with synthetic, which required a greater capital outlay than would grass or a combination of grass and synthetic, was based on the city's estimation of how much paid field usage would be required to fund the complex's operation. The debt service related to the complex's construction will largely be covered by a slight increase in the city's transient hotel guest tax. The city council, however, expects the operational costs to be offset by the revenue it generates from usage fees related to tournaments, clinics and recreational play.

"During the original development, the way to maximize the amount of play in the space we're dealing with was discussed," says Laplante. "The determination to go with synthetic turf was made partly because of our geographic location - the growing season is so short here. Also, because of the amount of use that would be required to support the operating budget, something needed to be put in place so that we aren't taking fields out of rotation for rehabilitation year in and year out."

Each of the 12 fields will be crowned and supported by its own drainage system with 8 inches of ¾-inch stone and another 1 to 2 inches of ¼-inch stone. "Each one is essentially an entity unto itself with its own system that ultimately filters into a main drainage system," says Laplante. "The fields themselves will be able to handle anywhere from 5 to 10 inches of rain in an hour and still be playable within 30 minutes to one hour. Barring severe thunderstorms, lightning, hail and tornadoes, we can play."

That's the selling point to tournament organizers looking to pay for a venue. To further maximize playable hours, the city plans to keep the complex open to tournaments year-round - except at times when snowfalls exceed 6 inches - and each field will be outfitted with lights.

Laplante acknowledges that an investment of this size deserves close scrutiny, especially when a good portion of the capital costs are related to technology that is relatively young. "The synthetic turf they're installing now is much better than it was 10 years ago, even five years ago - and five years from now the technology will be much better than it is now," he says. "But my primary concern right now is to fill up as many fields as I can."

The synthetic fields will also accommodate other sports that require open space, such as lacrosse, field hockey and ultimate Frisbee. While the complex will attract teams from throughout Overland Park and the greater Kansas City area, for it to meet the city's financial goals, it must extend its reach.

"The Kansas City area is in Region II of the U.S. Youth Soccer Association configuration," Laplante says. "There are 12 states in that region, and many of those regional tournaments happen within a five-state area. We'll be going out and aggressively pursuing larger regional and national tournaments."

Getting those users will not only fund the field's annual operating costs, they'll put the bodies needed in the hotel beds to accrue enough transient guest-tax revenue to pay off the 20-year construction bond. And despite what many financial experts are describing as recession-like conditions, Cosby says the city feels no need to hedge its bets. "We're in a very good situation financially," he says. "We have a very good credit rating, and our city is traditionally very conservative financially, so we have a lot less debt to carry than do most cities. As long as we can get those out-of-town guests to come here and play in our tournaments, we should be fine."

The complex will also be a kind of home base for the local Heartland Soccer Association, which serves 2,000 to 3,000 kids each year, and recreational leagues will also receive some priority in scheduling. "The big problem that a lot of youth soccer organizations face is that kids play until they are 10, 11 or 12 and then, for a number of different reasons, they quit," says Laplante. "The idea here is that we're going to create an opportunity for kids to play more consistently - they're not going to be kicked off the field because of things like weather - and hopefully there will be a little more interest in the community so that kids won't drop out. You're still going to have that attrition rate, but hopefully we can stem the tide some."