College Soccer Faces Challenges, but a Few Changes Could Advance the Sport

College soccer faces a number of challenges, but some say a few changes could greatly advance the game. 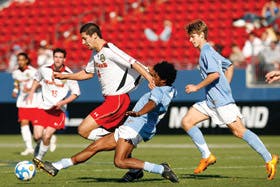 The University of Maryland men's soccer team must defend its NCAA Division I title this fall without three starters from the 2008 team that went 23-3-0. Jeremy Hall, the Terrapins' leading scorer last year as a junior, his classmate Omar Gonzalez and sophomore Rodney Wallace opted to sign Major League Soccer contracts rather than exhaust their collegiate eligibility.

Specifically, they signed "Generation adidas" contracts. Offered to roughly 10 select underclassmen each year, such deals guarantee a player three years of professional salary, with two one-year options. Players know how much they will make before they even know which MLS jersey they will wear. That's how it has worked since 1997, the first year of the joint program set up by MLS and U.S. Soccer to pool the nation's top young talent prior to the MLS draft in January and before foreign clubs can lure American players away.

While student-athletes leaving college early for the pro ranks is nothing new, the incentive for soccer players to make the jump is particularly strong. Generation adidas signees are typically among the first players drafted, since MLS clubs don't count the pre-established contracts against team salary caps. In addition to guaranteed employment, players receive a stipend to continue their college education, if they choose to do so. Throw financial bonuses from adidas into the mix, and it can all be too much to pass up.

"In Omar's case, he just felt he was ready to play at the next level and challenge himself," says Maryland head coach Sasho Cirovski. "But generally speaking, the kids leave because Generation adidas is the only way you can get a secure contract in MLS as a young player. If you go as a senior, and you get a contract, you could be cut on the first day."

"To me, this is one example of how MLS tries to use the colleges to its own benefit," says Soccer America columnist Ridge Mahoney, who has been covering the sport for 30 years. "It happens in other sports, and there's nothing terribly wrong with that. But unless college soccer players who stay with their programs for four years get picked in the first round, and very few of them do, they usually get a contract that's worth not much more than the minimum that MLS could offer anybody - some kid out of high school or some guy they picked up at the local community college."

Cirovski, who has chaired the National Soccer Coaches Association of America's Division I men's soccer committee for the past five years, has met with MLS decision-makers three times to try to persuade the league to change what he calls a "flawed" system that is "unfair" to senior student-athletes. To date, he has come up empty. "The MLS is a business," he says, "and their goals and our goals sometimes are not the same."

Many close to college soccer agree that it faces challenges - not only in relation to the way MLS eagerly eyes the elite underclassman talent pool, but in the way the NCAA sees the game, too. "The way our sport is structured within the NCAA is not ideal at all," says University of North Carolina coach Elmar Bolowich, who sits on the NCAA Division I men's soccer committee. "Because every sport is seasonal in the U.S., the NCAA values soccer to be seasonal. Nowhere in the world is soccer seasonal. It's basically played year-round."

Soccerlens.com writer L.E. Eisenmenger has called on the NCAA to loosen up its rules for the health of American soccer at large. "If the NCAA doesn't change its policies, doesn't look at soccer and its international influence, collegiate soccer could become much less important," Eisenmenger says. "The nominal mission of the NCAA is well-being, safety and academic progress, but if its policies and actions are diverting student-athletes away from college, that's in direct contradiction to its mission."

Cirovski has made it his mission to advance the men's college game, outlining a four-point plan that he's confident will gain the support of fellow coaches, if not the immediate endorsement of the NCAA. In fact, he's bracing for a 10-year fight on the first point: raising the number of men's scholarships currently allowed from 9.9, which is 1.1 fewer than the number of players a team sends onto the field at the start of a game. Compare that to football's 85 scholarships - enough to cover third-string players at every offensive and defensive position, including punters and place-kickers, and still have 13 scholarships left over. But football is only the most contrastive example. "Men's soccer is at the lowest percentage of scholarships relative to starting players and roster size of the six major men's team sports in NCAA Division I," Cirovski says.

The second idea, one not yet floated in any sport, involves allowing soccer teams to earn the right to play one to three additional games during the spring training season based on their players' academic progress rate. Says Cirovski, "I've got a whole formula and statistics to show that it would provide incentive for schools to do well academically, and I think the NCAA will appreciate the thought process."

Third, Cirovski would like to see extended by one week the men's fall season, which currently packs 12 days of training and a 20-game schedule into four months. Bolowich, for one, is onboard. "Nowhere in the world do teams play three games in one week," he says. "We cram everything together. In order to keep up with everybody else, you put your players under an enormous amount of stress early on. It takes away from the development of these players, because you hardly have time to train them."

The fourth point involves increased TV exposure. Cirovski was instrumental in negotiating a deal between the NSCAA and Fox Soccer Channel to broadcast men's and women's college games of the week, the highest ratings for which were realized in 2008, the final year of the contract, he says. A new deal was imminent as of this writing, but in between Fox's regular season coverage and ESPN's broadcasts of the NCAA College Cup semifinals and final, there is nothing. "We go dark for almost a month, which just cannot happen," Cirovski says.

The coach takes a similar "can't happen" stance on what he terms "embarrassing mistakes" made within the past 10 years regarding the staging of the College Cup, played in mid-December in frigid Columbus, Ohio, in cavernous Ericsson Stadium in Charlotte, N.C., and twice in greater Dallas, which boasts only one Division I soccer program.

Bolowich adds that the game would benefit greatly if its championship were held in the spring and not during the week of fall semester exams. "It only affects four teams, but still it's supposed to be our highlight of the season, what these kids work for all year long, and now they're in a pressure-cooker situation where they have to take exams on the day of a semifinal, away from their university, which takes a little bit away from the event," says Bolovich, whose Tarheels won the 2001 title in front of mostly empty bleacher seats in Columbus. "When you look at lacrosse, they have 40,000 people in the stadium because they do it on Memorial Day. People know when it is, the weather is usually nice and it's always an event. I'm not saying we should have our championship in May, but I think anything away from directly before the holiday season and exams would alleviate some of the pressures."

So far, neither the MLS nor the NCAA has felt sufficient pressure from within college soccer circles to change its ways. Nonetheless, Cirovski remains optimistic about the game's trajectory, despite the annual defection of its rising stars. "College soccer is increasing in significance in both the soccer and intercollegiate athletics landscapes. Over the past 50 years, it's probably been the rock of soccer growth in this country, because it has been the most stable," he says. "But we still have much room for improvement and room for much more growth. There is a lot of untapped potential."