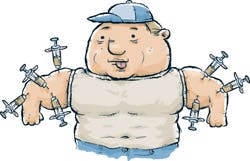 Advocates of competitive high school spirit teams, who for years have argued that cheerleading should be treated just like any other interscholastic sport, are getting their wish. In Visalia, Calif., under a new district policy, cheerleaders will be expected to submit to the same random tests for recreational drug use that are given to other student-athletes. "You don't want your daughter being thrown in the air by anyone on drugs," Mt. Whitney High School cheerleading coach Cara Carnahan told The Fresno Bee after Visalia's drug testing policy was announced.

The practice of testing high school students for illicit substances remains a controversial and costly one - even though it's been nearly 15 years since the U.S. Supreme Court ruled that the safety of student-athletes outweighs any privacy issues. While urinalysis tests for recreational drugs typically cost between $10 and $50 each, a steroids test costs substantially more than $100, which is why student-athletes in Visalia and other school districts are not tested for steroids.

In fact, Florida discontinued its pilot steroid testing program in February after tests of 600 student-athletes - at $166 a pop - yielded only one positive result in two years. Florida's move leaves Illinois, New Jersey and Texas as the only three states to administer steroid tests to interscholastic athletes. But after the University Interscholastic League in Texas recently reported that only 11 out of 29,000 student-athletes - all males - have tested positive for steroids since February 2008, some state lawmakers questioned the effectiveness of the $6 million program and suggested that it be scaled back. Proponents, meanwhile, argue that the testing acts as a deterrent to steroid use (see "Strength in Numbers," August 2007).

Florida nevertheless remains active on the high school drug-testing front. Manatee County - among three school districts in the state to receive federal grant money to test student-athletes (including cheerleaders) for alcohol, marijuana, cocaine and heroin use - is thought to have one of the strictest testing programs in all of Florida. An estimated 1,000 student-athletes in the district will likely be tested during the 2008-09 school year, and those who either fail the test or refuse to take it will not be allowed to participate on their teams. "It's designed to catch the students who have problems," Skip Wilhoit, a teacher with Manatee's Safe and Drug-Free Schools program, told the Sarasota Herald-Tribune. "If you go ahead and use when you're subject to random testing, you obviously have a problem."

But can testing really solve that problem? A 2003 University of Michigan study - still considered to be the largest of its kind ­- concluded that drug testing of middle school and high school students does not deter drug use. At each grade level studied (8, 10 and 12) researchers found virtually identical rates of drug use in schools that had drug testing and those that did not. "Schools are very pressed for funds, and the results of our investigation raise a serious question of whether drug testing is a wise investment of their scarce resources," Lloyd D. Johnston, one of the study's authors, said at the time. That statement may ring even truer today.

Indeed, fewer schools appear to be rallying around drug testing. When administrators at Matthews County schools in Virginia considered implementing a drug testing policy a few years ago after six members of the high school baseball team were busted for drinking alcohol, they ultimately decided against it. "Schools can't do everything for parents," former superintendent Harry Ward told the Herald-Tribune. "We finally came to that conclusion."