A sand pit has become an integral (and painful) tool for training University of Michigan football players. 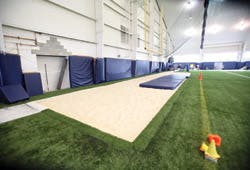 Trips to the beach are generally considered relaxing. However, trips to Barwis Beach can be vomit-inducing, according to the beach's namesake, University of Michigan football strength and conditioning director Mike Barwis. An 80-foot-long-by-16-foot-wide sand pit installed at one end of Oosterbaan Fieldhouse, a multisport indoor practice facility on the Ann Arbor campus, Barwis Beach is a training tool designed to give Michigan football players an explosive edge.

"Sand has been used for years for working with sprinters and explosive training," says Barwis. "It's been used some for football training, but not this extensively."

Michigan's sand pit is most often utilized for plyometrics-based drills to strengthen muscle tissue and train nerve cells to produce a strong muscle contraction in a short amount of time. As Barwis explains, there's a dissipation of force when athletes push off in the sand as opposed to a more rigid surface, and as the foot sinks it alters the myostatic reflex, making the process of converting and utilizing kinetic energy more difficult. "You have to exert a greater force load to accelerate," says Barwis. "It means you really have to focus on true extension at the ankle, knee and hip to power yourself out of the sand."

Barwis says the sand-based training is equally helpful in enhancing sprinting, vertical movements and power movements, such as a defensive lineman reacting to the snap of the ball.

Cut out of cement and lined with protective padding, the pit is filled with 2½ to 3 feet of sea sand, which was chosen for its fineness to prevent clumping and promote more rapid and consistent dissipation of force.

For Wolverine players, the sand pit is no vacation from their normal training. "It's a hell of a lot more difficult to work out in sand than it is on a regular surface," says Barwis. "At the same time, they love it because they know it's going to contribute to them becoming better football players."