Accomodating the Needs of Muslims a Challenge to Aquatics Providers

It is widely acknowledged that people of Muslim faith represent one of the fastest-growing population segments in the United States and Canada. Less appreciated, according to some experts, are their recreation needs.

A glaring example is women's swimming. According to most interpretations of the tenets of Islam, Muslim women are not to be in public without hijab (head and hair coverings and loose-fitting, modest dress that leave only the hands, feet and face exposed). For safety reasons, the practice is certainly not conducive to swimming. And for particularly conservative Muslims, the idea of donning tight-fitting swimwear in a public recreation environment is almost unthinkable. 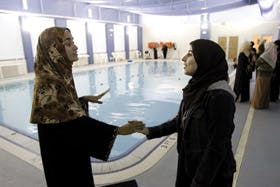 It's a problem that Juanita Bueschleb, aquatics supervisor for the city of Mississauga, Ont., believes every recreation provider with Muslim patrons has a duty to address. "Swimming is different. It's not just a recreation activity, it's a life skill," she says. "And if someone is never provided the opportunity to learn to swim in a comfortable environment, then that person is at risk."

Despite the logistical challenges, some communities have demonstrated that conservative Islam and the freedom to recreate need not be mutually exclusive. In Cary, N.C., while organizing swim classes for boys, a group of Muslim parents wondered what it would take to do the same for girls. A local aquatics center offered its standard rental fee for a 15-yard pool ($170 per hour), but windows overlooking a larger pool precluded the kind of women-only privacy required by the group's faith, according to Raleigh News & Observer reports.

After a $3,000 private fundraising effort on the part of the Muslim group, and approval from the aquatics center, a retractable shade system was installed. The first learn-to-swim class - involving some 35 women and girls in full-body swimwear, as well as female lifeguards and instructors - took place in December.

"I've wanted to waterproof this community for a long time," Jenny Jaber, a water safety instructor and Islam convert told the News & Observer's Yonat Shimron. "We're around water all the time."

Salman Shiekh, a native of Pakistan who helped lead the effort to make the class possible, told the paper, "It makes sense for business and service providers to accommodate the needs of the community. All it takes is dialogue to make it happen."

That very dialogue is what led Bueschleb and her staff to create numerous aquatics programs designed to attract more patrons from one of the city's more ethnically diverse neighborhoods into the pool and, ultimately, make them water-safe.

"There were a lot of people coming into the center, but there were not a lot of people coming into the pool area," says Bueschleb, adding that discussions with various users revealed that many of them - including people with body-image issues, teenage boys and girls, and some Muslim women - simply weren't comfortable in an open swim environment. Thus, new swim programs - including the women-only swim classes that are enjoyed by many Muslim patrons - were created and have boosted the center's attendance figures.

Bueschleb stresses that none of the programs are faith-based or discriminate on the basis of faith. But even limiting participation based on gender has made some waves. "We do run into some resistance to our female-only programming," she says. "There's a segment of the population that thinks it's almost like taking a step backward. But my belief is that it's almost like creating accessibility policies for people with disabilities. Everybody wants to participate in recreation programming, and we should be finding ways to allow everyone to do so."

Al Ellard, an associate professor in the Recreation, Parks and Leisure Services department at Central Michigan University, says looking backward may not be all bad when evaluating how well recreation providers are serving their Muslim patrons.

"I grew up in a fairly conservative Baptist family, and there were people among the folks I went to church with that didn't believe in mixed bathing - men and women swimming together," says Ellard, who helped develop a National Recreation and Park Association Conference session last year on leisure programming for people of Muslim faith. "Of course there is as much diversity among Muslim people as there is among Baptist or Catholic people - some people are more conservative and some are more secular in their beliefs. The fact is that those people with the more conservative beliefs may not like mixed bathing - and that's a fact that a lot of communities have yet to accommodate."

Simple policy decisions can provide a good starting point. In Dearborn, Mich., a Detroit suburb that boasts one of the highest concentrations of Arab-Americans in the country, policies related to dress and poolside access have been created to accommodate Muslim patrons. As opposed to requiring everyone on the pool deck to change and shower, the city created designated "spectator only" areas in which pool attire is not required, allowing mothers in full modest dress to monitor the pool.

As for accommodating actual swimmers without jeopardizing their safety, the city has specified that: a) swimsuits are required, but they may be worn underneath commercially approved full-body swimwear, and all clothing materials must be light enough in weight - as with nylon, polyester, Lycra or thin cotton - that when waterlogged they do not inhibit in any way the swimmer's movements or ability to stay above the water surface; b) the clothing must not be excessively loose so that it could pose any danger of entanglement, entrapment or strangulation; and c) bathing caps and other tight-fitting head apparel are permitted.

Dress accommodations should also be considered for other recreational activities, says Ellard. In fact, many agencies may not realize that they have dress policies - either written or implicit, based on years of practice or available resources - precluding the participation of conservative Muslims. "Do you really have to be wearing a tank-top and shorts to participate in a basketball league?" asks Ellard.

Policy issues aside, there are even facility design issues to consider. "We've collectively moved toward designing rec centers so they're like fishbowls, where everybody can see everything," says Ellard. "In a heavily Muslim community, that may not be the way to go. Muslim women like to recreate, but they often don't like to recreate in front of men. You want to ask yourself in the design process, 'Will people of certain beliefs be able to participate?' "

There are instances in which conservative Islamic beliefs are irreconcilable with public policy designed to prevent discrimination. Some women may only participate in aquatics if they can be assured that other participants - as well as lifeguards and instructors - will be clothed from head to toe. In such instances, private facility rentals can be appropriate.

Safety and supervision requirements notwithstanding, often all that's needed to appease groups that wish to be segregated from the rest of the facility are retractable shade systems like the one in Cary, and some Muslim groups have even brought in their own rolls of brown paper to cover windows and expanses of interior glass.

"We have a wide variety of groups that rent our pool, and people can choose what they want to do with their rental," says Bueschleb. "If any rental group requests that they want the blinds closed, we can accommodate that. If they specifically request one gender for staffing, we can try to accommodate that, as well."

It's not a Muslim issue, says Bueschleb, adding that the city similarly tries to accommodate groups such as the Roaming Bears, composed of nudist men. "You look around and ask, 'Who's missing from the pool area, and how do we get those people to come to the facility,' " she says. "It's about ensuring that everyone in the community has access."