A new fitness and nutrition system provides Navy personnel with the guidance they've been seeking. 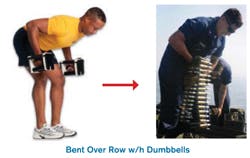 As the health and fitness professionals who had shepherded the Navy Operational Fitness and Fueling Series (NOFFS) through its development began project presentations to branch leadership last October, it looked as though their expectations, in the form of glazed eyes, were being met. Diana Strock, senior advisor for health and fitness with the Navy's Center for Personal and Professional Development, could almost read their minds: Another fitness program?

NOFFS, though, isn't like any other military fitness program, and Strock could see this realization come over the faces of any remaining skeptics as she showed photos of exercises that matched up with the kinds of operational movements that sailors perform in their everyday jobs aboard ships and submarines. The same thing happened when Navy fitness professionals attending the Navy Fitness Conference in Orlando, Fla. (held in conjunction with the Athletic Business Conference &Expo), were given their first look.

"You could see the light bulbs go on as soon as they saw them," Strock says.

Among the actual sailors who were consulted during the development of NOFFS, there were few glazed eyes, Strock says - to them, the need was clear. Earlier fitness programs had focused on helping sailors pass their Physical Readiness Tests or encouraging healthy behaviors (making the programs as much about marketing fitness as fitness), but the general sense throughout the fleet was that sailors didn't have enough basic information at their fingertips or the proper amount of space or equipment to make effective use of such efforts.

As Strock's group and their program development partners Athletes' Performance made the rounds of ships and subs, they were told repeatedly that the message had to be simple and trustworthy, and that the medium was as important as the message.

"Originally, we were developing individual manuals that covered movement preparation - one on muscular fitness, one on aerobic fitness," Strock says. "But when we went out and did the focus groups, the main thing the sailors commented to us was, 'We're not exercise physiologists. There's so much information out there, and a lot of it is bad information; we want something that will eliminate the guesswork.' They said, 'Do not put it in a manual, do not give us a CD - we want grab-and-go, something we can take with us.'" 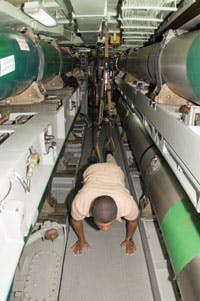 TIGHT FIT The submarine community's lack of space was the biggest challenge for NOFFS developers.

NOFFS comprises 90 exercises in all, detailed on laminated cards for ease of use, that are designed to replicate the lifting, pushing, pulling and carrying duties that sailors perform during their daily routines. (The exercises, also available on CD, will be shot on video for online consultation.) Priority has been given to exercises that utilize the equipment most commonly found on vessels (benches and dumbbells) and in the Navy's Fit-Kits (bands and straps), as well as to those that can be performed in very confined spaces. The program primarily targets the lone-wolf exerciser but, as Lisa Sexauer, program manager with Fitness, Sports and Deployed Forces Support, notes, "There's also a group physical training option to meet the needs of the ashore command who want to hold unit PT sessions based around the movements in NOFFS."

The exercise style is atypical for most military personnel, representing a departure from the linear movements favored by denizens of traditional weight rooms. "A lot of times, people don't know what else to do," observes Kevin Elsey, curriculum manager and performance specialist with Athletes' Performance, a Tempe, Ariz.-based athletic training facility. "Go to the gym, and the most popular things you'll see military people doing are push-ups, some sort of bench press, bicep curls, maybe some sort of squat, and loads of sit-ups. If there's a leg press machine, they'll jump on that because it's easy and they just know how to do it. That's the traditional view - train the body in isolation, and work on a specific muscle group. But think about what we do, day in and day out, and the demands we put on our body - it is important to prepare our body to move the way we're going to move."

A primary impetus for the program as a whole is the prevention of sports and physical training-related injuries, which the Defense Safety Oversight Council in 2006 tabbed as the area in which the Department of Defense could achieve the greatest reduction in lost duty days. (Running, another staple of military workouts, was found by the Joint Services Physical Training Injury Prevention Work Group to offer the highest risk of injury.) The problem, again, is not that military personnel are out of shape, but that the current training regimen is flawed. The culprit, according to anecdotal evidence and a growing body of research, may be a lack of efficient movement skills even among the physically fit. As Elsey puts it, "If you just do a push-up or bench press all day long without incorporating any sort of mobility, stability or upper-body pulling movement patterns, your body is going to get out of balance. Your shoulders will begin to roll forward, placing them in a poor position to function, your chest is going to overdevelop and your back is going to get weak." Before you know it, he says, you're injured and in physical therapy.

At least initially, the nutrition ("fueling") side was viewed through the same lens of performance, Strock says - "high octane, high energy. But when we went out to the operational platform, we found that they were asking really basic questions like, 'How do you build a meal plan? What is a portion?' We were like, 'Wow.' They were looking for information they could use over their lifetime."

Strock describes the submarine community as the program developers' most challenging, with exercise not the only thing limited by lack of space. "Sub personnel only have a limited amount of space in their refrigerator, and they're under way so much that they don't get as many of the replenishments," Strock says. "So fruits and vegetables get canned - figuratively as well as literally."

Sailors aboard the submarine USS Boise had been deployed all but 55 days the previous year, and they gave the program developers a lot of good information - but also an earful - about the built-in limitations placed on them by a life spent at sea. Strock recalls, "After talking with them for a couple of hours, we finally just looked at them and said, 'What you are basically asking us to do is develop a comprehensive program that you can do in the space of a shower.' And they said, 'Yeah, that's what we're asking.' I think we've done it."