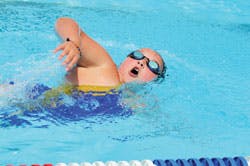 FIGHTING THE CURRENT Despite the prevalence of weight-management education in this century, childhood obesity rates are still peaking.

For the first time in our history, American children may face a shorter lifespan than their parents.

Although admittedly speculative, that warning has been oft-repeated by Michelle Obama since a Feb. 9 presidential memorandum established a national task force on childhood obesity, helping launch the Let's Move initiative spearheaded by the First Lady.

The good news is that, according to numerous studies, childhood overweight and obesity rates appear to have leveled off after three decades of rapid escalation. The bad news is that, still, approximately one in three children in the United States has a body mass index that is higher than normal - this according to a study using longitudinal, government-collected data and published in January in the Journal of the American Medical Association.

How relevant is this information to parks and recreation providers? Well, that certainly depends on the size, scope and mission of a given agency. But other recent research confirms the commonsense notion that children without access to parks and recreation facilities and programs are at higher risk of being overweight or obese. Combine that with the momentum surrounding Let's Move, as well as the related funding opportunities becoming available to local agencies and community organizations for obesity-prevention programming, and now may be as good a time as any for recreation providers to take stock of their efforts, or lack thereof, related to curbing what has been widely described as a nationwide epidemic.

Conceptually, Let's Move may not be groundbreaking; nonprofit and government agencies at all levels have been addressing the problem since at least the beginning of this century, a fact that has arguably contributed to the apparent plateauing of obesity rates. But it and other obesity-prevention initiatives now have the unprecedented opportunity to benefit from the $650 million that "shall be provided to carry out evidence-based clinical and community-based prevention and wellness strategies authorized by the Public Health Service Act that deliver specific, measurable health outcomes that address chronic disease rates," as outlined in the American Recovery and Reinvestment Act of 2009.

In response to the Act, the Department of Health and Human Services has developed the Communities Putting Prevention to Work initiative, designed in part to mobilize resources at the local level. Nearly $450 million of the money - including $373 million directly to communities with outlined approaches for chronic-disease prevention - was allocated on March 19. And $230 million of that has gone directly toward obesity-prevention programs in no fewer than 25 communities throughout the country.

San Antonio, Texas, where a recent study showed that 30 percent of children ages 8 to 10 are obese, with an even higher rate for Hispanic children, was awarded a $15.6 million grant to create programs and develop its parks and recreation infrastructure. "We want to establish a fitness culture," San Antonio mayor JuliÃ¡n Castro told the San Antonio Express-News after the award was announced.

"Research is now showing that there's a close correlation between public health and recreational opportunities, both close to home and in state parks," says Randy Rosenberger, an associate professor in the Department of Forest Ecosystems and Society at Oregon State University, referencing a recent statewide study conducted jointly by scientists at OSU, the Oregon Parks and Recreation Department and the Pacific Northwest Research Station of the USDA Forest Service. The study also confirms the unfortunate trend in which funding for parks and rec facilities is, in this economy, often an afterthought. Says Rosenberger, "The health aspects of outdoor recreational opportunities are poorly appreciated."

But parks and recreation providers certainly appreciate those aspects of recreation. Addressing childhood obesity specifically, the National Recreation and Parks Association partnered with the National Heart, Lung and Blood Institute in 2000 to launch Hearts N' Parks, a nationwide program designed to curb obesity and risk of heart disease by encouraging healthy weight levels, heart-friendly nutrition and abundant physical activity. In 2005, that program evolved into We Can!, an NHLBI-led program designed to help children ages 8 to 13 reach and maintain healthy weight levels that has since been adopted by scores of municipal recreation agencies.

"It was an attempt to engage parks and recreation departments, to make them well aware of the problem of childhood obesity, as well as make sure that the principles of moving more, eating well and reducing sedentary time were all part of their vernacular," explains Karen Donato, coordinator of overweight and obesity research applications for the NHLBI.

Donato, for one, believes that parks and recreation providers tend to have a skill set that allows them to positively act on information that may have originated in a scientific survey or through the clinical testing and research of a health department. "The parks and recreation staffs we've worked with have been very receptive and eager to be involved in making a difference in their communities," says Donato. "They're astute and knowledgeable people. They can take what might be considered run-of-the-mill information and develop some very creative programming around it."

And when developing children's programs, especially when they pertain to something as seemingly unappealing as healthy weight maintenance, Donato says such skills are essential. "You're trying to get the attention of children and their families," she says. "But it has to be fun and engaging. You want them to have more active play, but you also want them to have fun so they'll be willing to learn these behaviors for a lifetime."

Such learning should soon be under way at the parks and rec agencies throughout the country that are preparing to make use of their federal stimulus awards. And NRPA is maintaining its role as an administrative partner in the U.S. Centers for Disease Control and Prevention's Healthy Communities Program, known as ACHIEVE, through which numerous parks and recreation agencies are involved in obesity-curbing programming and policy-making.

With these and other initiatives perhaps beginning to show some tangible rewards - for now, at least, the leveling off of obesity rates - Donato, as a public health professional, welcomes any money or momentum that may trickle down from the federal level to the care of enthusiastic parks and rec practitioners on a local level. "We Can! has been pleased with the outreach interest and potential," she says. "And with the First Lady's Let's Move campaign, we're hoping there will be more synergies, as well as more interest in and visibility for the topic of childhood obesity."