What in the World Does it Take to Motivate Health Club Prospects?

After no one bites on a free membership, musings on what in the world it takes to motivate prospects. 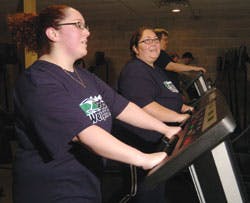 WINNING WEIGHS The mother/daughter team of Nicole, left, and Nancy Padilla, worked out at Elevations Health Club during the Great Pocono Weight Race.

Imagine what would happen if your neighborhood bar offered free drinks for six weeks, or if a candy store or restaurant made a similar offer for their wares. They'd have people knocking down their doors, right?

Maybe we should be running a bar, candy store or restaurant.

We've always known that most people simply don't want to exercise, but a recent experience demonstrated just how far some will go to avoid it. It was depressing, even though we've owned our business for 15 years and thought we had seen it all. It was especially frustrating given the contrast with another group of people who couldn't have been more excited about what we offered to them.

It all started in late 2009 when, in a partnership with our local newspaper, we announced a weight loss contest modeled after the TV show, "The Biggest Loser." The winner would receive a free one-year membership to our facility. We thought that if we got 30 applications, we'd be pleased. The actual number of applications was staggering - more than 160! Naturally, we were thrilled, and we were off to a great start. We interviewed 30 applicants, and from that list chose 11 contestants and two alternates.

The contest - dubbed "The Great Pocono Weight Race" - was a tremendous success. Our contestants lost more than 300 pounds in 10 weeks. We changed lives. We got great publicity. The contestants became role models and inspired people throughout our community. Our trainers gave of themselves and performed brilliantly. It was remarkable.

Now, back to those 150 people who didn't get selected for the contest.

Given what we read in their applications for the contest - their desire to change their lives, frustrations with failed attempts at weight loss, concerns with their health and longevity - we wanted to help them all. We offered them each a six-week membership for just $6, and we included free group training sessions several times per week at both of our locations. We had never done anything like this before, but we felt it was in keeping with the spirit of the contest and the community service we were trying to provide. Full disclosure: We also thought we might get some long-term memberships out of it.

Guess how many people took us up on the essentially free six-week membership and training? Zero!

We've thought long and hard about what this means to us, and how this reality gibes with studies we've seen on "why people join" and "why people quit." While our observations may seem cynical, we think they reflect reality:

"Free" never matters. It is a universal truth that you don't value what you don't pay for. We thought that we were giving these 150 people what they wanted in the first place - a chance to lose weight - so they'd take advantage of it. But once they weren't chosen for the contest, even a free membership couldn't entice them.

Most people don't want what we're selling. They didn't want a health club membership or training. They wanted a silver bullet to lose weight. Perhaps if we had packaged our offering as a six-week weight-loss program that coincided with the official contest, then we might have seen some interest. But a membership to the gym? Weekly training sessions? That's not what they wanted, even though that's exactly what we offered to the contest participants.

The pain has to be pretty bad for most people to make a change. Among the criteria we used for choosing the final 11 contestants was our belief that those individuals were sick and tired enough of their weight problems that they would make a change. The good news was that we chose wisely with those 11. Of the other 150, we could only conclude that their personal pain and frustration was not yet bad enough to motivate them to make a change.

There has to be something beyond fitness and weight loss. Even for our 11 contestants, the initial hook wasn't just the opportunity to lose weight. This contest was being held in full view of the public, with frequent stories in the newspaper, a detailed website with oh-so-detailed photos and videos, and blogs from each contestant. All of them knew what they were signing up for, and given the popularity of "The Biggest Loser," the contestants were motivated. As the contest progressed, some even achieved modest local celebrity. For the people who weren't chosen, all of those ancillary motivating factors didn't exist. It must not have been good enough just to quietly train and lose weight, because part of what all of the applicants were looking for was accountability to the public.

While we remain shocked that nobody took us up on our offer, we have balanced that against the remarkable success of the contest and the results of the Weight Race participants. This has reminded us - and we've reminded our staff - that our job, from the moment a prospect walks in the door and for every visit he or she makes to our facilities, is to ask questions and find out what motivates and encourages each person. The greatest offer in the world will fall flat if it does not inspire our members and potential members.

Walking into a gym is one of the hardest leaps of faith that many people, especially those who are dramatically overweight, will ever make. Our Weight Race participants would tell you that their commitment to the contest was one of the greatest experiences of their lives. Their old impression of themselves and of health clubs has been changed forever.

Now, we just need to get back to those other 150 people and try again. Otherwise, we might as well start selling Kit Kats, or shots of Jim Beam.