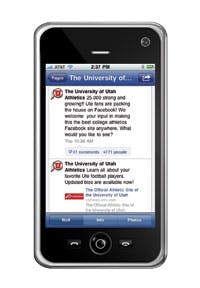 UTE TELL ME Fans of the University of Utah Athletics Facebook page get information about ticket availability faster than those relying on traditional media.

It was late in the summer of 2008, and the University of Utah still had 500 football season tickets to sell. Zack Lassiter, Utah's assistant athletics director for corporate sales and ticket operations, was prepared to send out a traditional press release, in the hopes that local newspapers and TV stations would take the ball and run with it. But first, the ticket department posted a notice about availability on the Utah Athletics Facebook page, which at the time boasted fewer than 15,000 fans. By the time the press release even reached traditional media outlets two hours later, all 500 seats had been sold. "That's when it really clicked," Lassiter says. "Press releases are still a very important part of what we do in terms of getting information out, but we realized that in Facebook, Twitter and other social media, we had really powerful ways of getting the word out and letting others spread the word."

Today, Lassiter is spreading the word about Utah's social media sales approach. He launched his own blog this spring and has helped facilitate two conference calls among a group of 40 peers that goes by the name NCAA Proactive Ticket Sales Professionals. In the past, "college athletics ticketing was usually someone who ran the box office, somebody who serviced individuals when they called," says Lassiter, who has been at Utah for five years, after ticketing stints with the University of North Carolina and Louisiana State. "But college athletics ticketing is evolving as we're trying to generate more revenue and sell more tickets."

Ticket sales represent the overwhelming majority of revenue generation in most college athletic departments, and the potential impact of social media on ticket marketing is limited only by the imagination. Months before the University of North Dakota men's and women's basketball teams played a January doubleheader in Ralph Engelstad Arena, the opulent home of the school's higher-profile men's ice hockey program, a local marketing firm helped UND design and implement an online landing page of promotional content fed by multiple social media outlets. Says Jessica Magness, account manager at SimmonsFlint, "We basically sat down and had a meeting to determine what available channels we had - traditional and non-traditional - and found we could utilize Facebook, Twitter and YouTube together to flow around the landing page and create awareness of this specific event."

Tweets linking to YouTube video of players taking a bus ride of only a couple hundred feet to the arena, casing out the concourse, trying on merchandise in the Sioux Shop and dribbling basketballs directly on the ice served as tongue-in-cheek reminders that "Meltdown at The Ralph" would be something out of the ordinary for programs that don't otherwise garner much attention in Grand Forks. The site also directed visitors to Ticketmaster, where individual game or packaged event tickets could be purchased. "Social media was a great way for us to highlight that this was the only time all season that games were scheduled back-to-back," Magness says.

Thirty-second TV spots and outdoor billboards also were purchased, Magness adds, but social media delivered plenty of bang for the buck. The event drew the largest home crowd in several years for either program - 4,378 fans - a season-high 960 of whom were students (average student attendance for basketball in 2009-10 was 144). Based on this success, SimmonsFlint has been retained to help UND sell single-game football tickets, and social media will be "a huge part of that," says Magness. As Utah's Lassiter puts it, "Social media is the great equalizer in a lot of ways, because it's more about your time and creativity than how much money you throw at it."

The cost-effective nature of social media ticket marketing has caught on with budget-wary Major League Baseball teams this season. According to the Internet marketing news site clickz.com, the San Francisco Giants offered their 19,000 Twitter followers a "tweet-up" promotion in late April that combined inexpensive seats with a commemorative T-shirt, the Cleveland Indians have offered half-price tickets through Groupon (an online source of city-specific entertainment discounts), and the Seattle Mariners have prompted fans during games to check in on Foursquare (a phone app that allows users to share discoveries within a given city). The Houston Astros are drawing 27,500 fans a game this season, but they have amassed 137,000 fans on Facebook since establishing a page last year. There, they post ticket discount alerts. "I think it's something you're going to see more and more of and, by the end of this season, you'll see [most MLB teams] doing social media in full force," Astros senior director of social media Alyson Footer told ClickZ writer Christopher Heine. "Like social media communications in general, the [Facebook] ticket offers engender goodwill by reaching out to the fan base."

Because the end user willingly buys into the concept, social media combines the ultimate in direct marketing with a soft-sell approach. "It starts with building relationships with your existing customers, but it's also a great way for our sales staff to expand their net," says Lassiter, adding that the pro-sports model applied at Utah includes not only a Twitter account for Utes ticketing but separate accounts for all sales reps, as well. "We've reached out, made contacts and developed relationships with a lot of people, so when tickets go on sale we have a way of getting in touch with them. It's an easy way, and it's something that they're asking from us. It's not something that we're forcing on them."

Moreover, social-media-driven ticketing transactions are getting ever easier. In its effort to make "Toy Story 3" Pixar's top-grossing film of all time, Disney recently launched a Facebook application called "Disney Tickets Together," allowing would-be moviegoers to purchase tickets without even leaving Facebook. At the same time, an individual's Facebook friends are alerted to the purchase and invited to buy tickets themselves.

Whether such an approach becomes the standard in sports ticketing is anybody's guess, and Lassiter, for one, isn't willing to predict the future. This much is known: Since that Facebook post two years ago helped sell 500 Utah football season tickets inside of two hours, the number of fans linked to the Utes' page has doubled. "The reality is there's so much information out there, and people now know that the Facebook account is a great way to get it," Lassiter says. "These are people we know are specifically opting in and asking for information about our programs. To not service these people in this way would be silly."