At some schools, sports teams owe their existence to outside financial support. 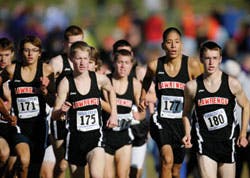 LEGWORK Booster groups are being relied on like never before to keep sports alive.

Citing a $6.5 million budget gap for the upcoming school year, Tolleson (Ariz.) Union High School District administrators were forced earlier this year to eliminate swimming, cross country, golf and tennis at the district's five high schools - sports strategically chosen to impact the fewest participants. But when swimmers and their parents at Westview High took it upon themselves to raise the estimated $25,000 needed to save the Knights' swim team, the school board stymied their efforts, stating it would be unfair to reinstate one team with outside funding if dollars couldn't be found for Westview's other eliminated programs or for swim teams at the other four schools.

"It's not fair to allow some kids to have greater opportunities than others," Kim Owens, a member of the Tolleson Union High School District board, told The Arizona Republic, citing concerns about Title IX and providing similar opportunities for students on all five campuses. She added that the board agreed in April that donations would not be accepted for a particular sport or school. Superintendent Margo Olivares-Seck said that principals don't want to rely on outside organizations to raise money to save athletic programs. They only want the sports reinstated "if the district provides the funding," Olivares-Seck told the paper.

"The last thing we want to do is beat up a school board, but it's sad that there's an automatic reaction of trying to put down the power of the parents," says Steve Beden, executive director of the Kennewick, Wash.-based North American Booster Club Association. "Parents are very passionate about supporting their kids, and they really do have the ability to step up and make some pretty dramatic enhancements for helping these programs."

Fundraising for specific athletic programs is legal in Arizona and is done at many high schools in that state and around the country. In Mesa, Ariz., for example, money raised by private groups is accepted by the local school board each year and applied to sports or other programs. Last fall at Sebastian River High School in Sebastian, Fla., athletic director Michael Stutzke informed coaches of the boys' and girls' golf, bowling, cross country and lacrosse teams, as well as those of the weightlifting, competitive cheer and girls' rugby squads, that their teams had only a few days to become self-sufficient. If they could not, those sports would be eliminated. The golf, lacrosse and rugby teams were able to generate the money and meet the deadline.

In Tolleson, a local businessman and city council member chipped in $1,000 to help members of the Westview swim team join the Southwest Valley Family YMCA's swim club, which also offered students a discount. But the fees are still double that of high school swimming fees, and club swimmers are ineligible to participate in meets sanctioned by the Arizona Interscholastic Association.

Beden predicts there will be more situations in which significant outside funds will be needed to keep certain interscholastic programs alive, as districts continue to lose state and federal funding and eliminate athletics and other extracurricular activities. But so far in 2010, high school booster clubs are noticing a significant decrease in contributions - including an 82 percent drop in the average donation amount over the previous 12 months, according to NABCA's research. And 62 percent of all donations received have totalled $10 or less.

In such a tumultuous economy, Beden thinks districts like Tolleson Union High School should take what they can get. "I understand what they did, but I don't agree with what they did," he says. "They gave no solutions, no support." He suggests that school boards in similar crises convene a mandatory all-district parent meeting, in which administrators talk openly about the uncertain future of specific sports. Then they should offer to work with parents to develop strategies to maintain those programs - perhaps via a district-led steering committee or even an outside organization that can rally parents. "But if a school district comes back and says parents have to raise money for the entire district, it will never happen," Beden says. "The district has not taken a proactive role in trying to help ensure the continuation of those programs, which really hurts the kids."

One possible solution that NABCA encourages is the creation of an executive booster club to oversee a school's individual booster groups. Such an organization can serve as a reporting agency, as well as mediator and mentor - helping generate fair opportunities for booster clubs of smaller sports and training all new members in proper policies and procedures.

The Saugerties (N.Y.) Booster Club represents an example of the power a single, all-inclusive booster organization can exert. Over the summer, the club, whose website states that its purpose "is to support all interscholastic sports in the Saugerties Central School District" for grades seven through 12, raised more than $150,000 to match a private donation - thereby saving the entire slate of sports programs at the junior and senior high schools for the 2010-11 academic year. The money will go toward transportation, officials' fees and coaches' stipends, district athletic director Lee Molyneaux told the Kingston Daily Freeman. No new uniforms or equipment will be purchased. (Meanwhile, fundraising continues in an effort to save the district's music, arts and library programs, which also were axed.)

"Unfortunately, those type of executive booster clubs are in the minority," Beden says. "But that's really the ideal format. That's the one we preach and teach, because it helps to bring about a lot more involvement, a lot more structure. It brings together an organizational body that can really help oversee all of the challenges."

If that approach is so effective, why don't more schools follow it? "It's a slow transition," Beden admits, suggesting that an executive booster club could be implemented with a set of freshman parents who slowly build the base and culture of the club over a four-year period. "The booster club industry has been sort of like the Wild West. There are a lot of independent organizations out there, and they are somewhat disorganized. They really focus on their own special needs. Until there becomes a greater demand for getting them together in larger groups, it's going to be tough."