Establishing Rules for the Wireless Generation of Employees

Owners walk a tightrope when establishing rules for the wireless generation of employees. 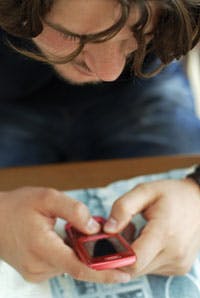 ALL THUMBS A rule barring employees from using cell phones at work is harder to police now that phones are seemingly used for everything except talking.

As business owners, we've always been aware that we are different from members of our staff, even our most senior managers. We repeatedly caution owners of small facilities to keep a professional distance between themselves and their employees, something that can be challenging in a health club environment. Owners, general managers and other employees might work out together and even (we might as well admit it) have an adult beverage or two together. That's all fine, but there's "us," and there's "them." After all, we might have to fire them one day.

These days, greater differences separate us. When we started our business, although we had responsibilities such as mortgages, spouses and children, we were in our late 20s, so we were still on the same wavelength as the college-age kids we hired. The difference between us wasn't generational, but was instead defined by roles and titles.

Now, the difference is - well, we haven't gotten older as much as our staff has gotten younger. We're just nowhere near to being on the same wavelength anymore.

We gave a talk at last year's Athletic Business Conference on "Managing the Net Generation," during which we discussed many of the lessons we've learned about dealing with this new generation of employees. We understand them (their parents convinced them they're infallible); we know how to communicate with them (it's about them first, their job second); and we know how to manage them (black-and-white rules). But, like parents dealing with their own children, we sometimes (often?) feel like we don't know anything. Or, maybe more accurately, we wonder if we can keep up.

As it turns out, the "net" in "net generation" is trickier than we thought. Example: We thought we had cell phones nailed when, several years ago, we implemented a rule barring them at work. We encouraged our staff members to leave their phones in their cars or at least with their personal stuff, tucked away someplace. We overcame the typical worry of this self-absorbed generation - "People need to reach me!" - by reminding them that we have land lines on which they can receive calls.

Now, however, it seems nobody actually uses a phone to talk. People text. They use Facebook. They e-mail. They tweet. And even if their phones are in silent mode, they glance at them constantly. So, our staff has become harder to police because they can keep their phones in their pockets and surreptitiously stay connected to their equally self-absorbed friends. Even worse, we have taken to using text messaging to communicate with our staff members, so how can we deny them having their phones readily available? It seems we're headed toward two rules, the second of which undercuts the first: 1) No talking on your cell phone, and 2) Only take it out when nobody's watching.

Facebook is causing us even more problems, in terms of where and how people use it, as well as what they feel compelled to post. Both of these issues are among the hottest topics in business today. Do you prevent employees from using Facebook at their computers? If so, what about their smartphones, which they can use anywhere? And, what is appropriate for them to post (or tweet) about their job or their employer?

We have watched (and given tacit approval) as our staff has used Facebook in ways that promote us. Instructors frequently post things on their personal accounts such as, "I'm teaching at 5 p.m. Who's coming?" Members who are their Facebook friends respond in droves. How can we not love that?

But the dark side of social media was demonstrated when an employee posted a derogatory observation about a large local employer that happens to be our biggest corporate account. Another time, an employee posted - from a work computer - that we were a terrible employer because we had run out of rubber gloves for her to wear when cleaning equipment.

Knowing we can't have it both ways, and without yet having created concrete guidelines for what is acceptable and unacceptable Facebook behavior, we've been working on the fly, hoping to find a balance with whatever rules we put in place. We recently cut off Facebook access from our work computers, which we did even knowing that the "back doors" are the phones that we'd prefer our staff members not even have with them in the first place.

This change initially shocked our staff members - it was like telling a teenager, "You're grounded!" - but the shock has worn off. Mostly. Our staff members who legitimately need access to Facebook have it; a few who were cut off defriended us, which makes it a bit more difficult to monitor staff members' personal posts. (We have enough "eyes" out there that we trust we'll know what's going on if a staffer behaves improperly.)

For content that is posted, we made a new policy that neither our gym's name nor any members' names may be included in any personal posts. Our authorized Facebook administrators, who post on our various pages (home, swim lessons, group training), can get through our firewall and, of course, are expected to properly represent us. However, we've asked them to get on and off as quickly as possible; we feel that if anyone starts to do personal stuff, we'll know about it. There is very little privacy at either of our clubs.

We don't know what the long-term effect of these changes will be. In the short term, we got everybody's attention about what was considered professional behavior. In our view, nobody's personal or professional life has been diminished in any way.

These technological and cultural changes have driven home a larger point to us. Until recently, we believed that there was no job within the walls of our business that we would not do ourselves. We'd be the first to arrive and the last to leave. We'd cover every shift. We'd unclog toilets. Now, we just don't have the time or energy for all that. We come and go as we please, because we work and worry about our business 24/7. We're the owners; they're not. It makes us feel a little guilty, but we're getting used to it.

We're the old guys now, but we feel young with our smartphones and Facebook accounts. We have our cell phones with us all the time - and we're on them - because we have multiple facilities and our cell phones are our primary points of contact. So, yes, we can be on our phones and our employees can't.

When did we turn into our parents?