Technological advancements in handheld personal devices complicate usage policies for the locker room and beyond. 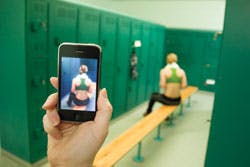 CAMERA SHY To prevent picture- or video-taking of unsuspecting members in states of undress, most fitness facilities have a blanket ban on cell phones in locker rooms.

Measuring just 3.6 inches tall, 1.5 inches wide and less than a quarter-inch deep, the latest generation, 16 GB-capacity iPod nano can store as many as 4,000 songs, or take and store up to 14,000 photos or 16 hours of video. But despite a Nike-branded application that allows users to track and catalogue workout data, the nano has found it hard to fit in at some fitness centers.

In fact, just before the Apple product hit the market late last year, its small size and video capabilities caused the Minneapolis-based fitness club chain Life Time Fitness to preemptively ban the device from locker rooms at all of its then 84 facilities in 19 states. According to St. Paul Pioneer Press reports, the chain was hoping to protect its members from being inappropriately photographed or filmed.

A policy banning cameras or video recorders from locker rooms is a no-brainer. But, considering that cameras or recorders are now ubiquitous features of personal wireless devices such as cell phones or mp3 players, policy-making for many fitness, recreation and athletic facility operators has gotten a little trickier.

In the two years since Athletic Business launched it's online Readers' Q&A feature, a single question about camera phone policies in locker rooms has received, by a wide margin, the most discussion among athleticbusiness.com readers. Why? Perhaps because every facility must have one. "When opening our new facility back in the spring of 2005, we researched building policies on a number of college web sites and found that this was one policy we felt was important," says Alec Southall, manager of recreation facilities at Boston University. "We don't allow phone use of any kind in any part of our facility. Our policy is, essentially, 'Put your phone away.'"

Omaha, Neb.'s WellBound Fitness likewise prohibits any use of cell phones within the building. "The most obvious reason is due to cameras, which are a part of most cell phones, and the increased liability in allowing them in," says the club's director, Michelle Streif. "Another reason is safety. If people are on their phones while exercising on equipment - especially treadmills, weight equipment and things that require a high level of concentration - they are more likely to hurt themselves or someone else." Streif likens using exercise equipment while using a cell phone to driving while talking or texting, practices that have begun to face bans in jurisdictions throughout the country. "Both put people in danger, and clubs may be held liable for incidents." 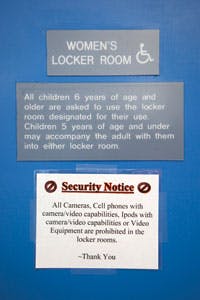 Still, most policies surrounding the use of personal wireless devices in fitness and recreation settings explicitly target the locker room. Members of the Weymouth Club in Weymouth, Mass., are allowed by club policy to use their cell phones only in the lobbies or cafÃ© areas. Cell phone use in the locker areas is strictly prohibited. "Many years ago, we made that policy because it was just obnoxious to have people using phones because they would be talking loudly, disturbing other members," explains the club's executive director, Richard Synott. "With the advent of the camera phone, it became even more of an issue. We don't want any nude photos of our members turning up on the Internet."

Concerns about lewd conduct aside, the often-cramped confines of a locker room can, in some members' minds, up the annoyance ante created by chronic cell phone users. Says Streif, "The gym or wellness center is where people come to relieve stress and improve health, not to be bothered and irritated by hearing others conduct business or talk about their personal lives."

Though safety, patrons' collective comfort and mitigation of liability are all positive results of blanket cell phone bans, technological innovations have caused many clubs to revisit their policies to allow conditional use of personal wireless devices. At the Weymouth Club, which includes indoor and outdoor pools, a comprehensive fitness center and one of the Boston area's largest tennis centers (housed in two buildings), department-specific policies exist to allow instructors and other staff members to stay at least somewhat connected to cell-toting patrons.

"Most of our members choose to contact trainers, instructors and tennis pros directly via cell and not use the club's voicemail system when they want to book or change appointments," says Synott. "Some of the staff who teach our members and guests have to stay connected because people run late, they need to switch dates or times, management staff may need to relay information, or the member can't remember where their lesson is."

Therefore, the club allows for limited cell phone use for many of its instructors - tennis pros, personal trainers, swim instructors and group exercise leaders among them - between classes or in staff-only areas of the club. Incidentally, lifeguards are prohibited from bringing cell phones into the club. "We had too many issues with them texting," says Synott. "If they get caught with a phone, they are immediately terminated. This is a zero-tolerance situation."

As the Weymouth Club and other facilities continue to integrate in-house scheduling and networking software to the personal devices of both users and staff members, Synott, for one, believes policies related to cell phones in locker rooms and beyond will likewise need regular revisions. "This is a continually evolving issue," he says. "As the technology changes, we have to adapt."