Paid-game scheduling agreements often lead to lopsided scores, but they help many schools balance their books. 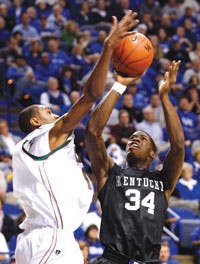 TRAVELERS' CHECKS A return trip to Kentucky this season is worth $90,000 to the Mississippi Valley State men's basketball program.

William Bright Jr. knows better than anyone that it's hard to market something sight unseen. That's the situation Mississippi Valley State University's director of athletic communications faces this season as the Delta Devils open the men's basketball season with 13 consecutive games away from home. MVSU, which hosted just one non-conference game in each of coach Sean Woods' first two seasons, will again head into some of college basketball's most hostile territory, with road games at Kentucky, Butler, Marquette and a handful of other schools expected to vie for NCAA tournament bids come March.

It's possible the team won't have a victory to show for its 12,600 miles traveled, but it will pocket a combined $700,000 just for showing up. For an athletic department that saw its budget reduced by 20 percent this year to $3.3 million, such scheduling is seen as necessary. "It's good for our kids to get to play top-caliber teams, and the lessons they learn from those games do provide instruction for our conference games," Bright says. "But, you know, it's a revenue source."

Playing away games for guaranteed payouts has become a way of life for a lot of schools. This football season saw San Jose State earn $1.825 million by playing back-to-back Saturdays at Alabama and Wisconsin, games SJSU lost by a combined score of 75-17. But don't confuse the Spartans with the Aztecs of San Diego State, who received $800,000 to play at Missouri this season, its 23rd guaranteed payday since 2000. The Aztecs' record in those games: 0-23. SDSU's total take: $6.1 million.

"People are having to find ways to increase revenue, and guarantee games are a way to do that," says Kevin Barefoot, director of sales and marketing at Winthrop Intelligence, a company that has compiled details of more than 5,000 college football and basketball game contracts into a searchable database. "You can't go out and pound the pavement and make big increases in the number of tickets you sell. You can't force people to buy your T-shirts and sweatshirts. You can't force them to make donations. Sometimes it can be a detriment to their end-of-year record, but there is a steady revenue stream out there available for FBS and FCS schools every year in basketball and football."

"It really helps the bottom line, as we have the challenge of the cost of scholarships going up and the cost of education going up significantly in the state," SDSU athletic director Jim Sterk told The San Diego Union-Tribune in September.

The payouts have continued to go up, too, particularly since 2006, when football teams were first permitted to schedule 12 regular-season games. In the 10 seasons prior to 2006, the average number of matchups pitting Division I-A and I-AA schools (as they were known then) was 54. The average since is 74 - one team looking to pad its win column, both teams looking to stuff their pockets. For big-time programs, an extra home game equates to millions of dollars in ticket, merchandise, concessions and parking revenue, allowing them to cover the payment to an opponent, no matter who it is, several times over. Ohio State set the single-game bidding standard last season when it paid Navy $1.45 million for a visit to Columbus. This fall, Auburn paid $1 million each for home games against Arkansas State and Louisiana-Monroe, two of 30 matchups nationwide in 2010 that paid out more than $500,000. Next season, San Diego State travels to Michigan for $1,016,800, which is nearly what it can expect to make in an entire season of home ticket sales. "There are now more games to fill and so the money's going up at the big schools," says Nathaniel Grow, assistant professor of legal studies at the University of Georgia, whose review of a 2008 breach-of-contract case involving the football programs at Louisville and Duke will appear in an upcoming issue of The Journal of College and University Law. "The smaller schools are kind of looking for a greater cut of the action."

And some are willing to go where the action is, even if it means buying themselves out of one contract to secure another. As far back as 2003, San Jose State was scheduled to play a game this season at Arizona State, but opted to pay ASU $250,000 so it could ditch that commitment and accept $825,000 to play Sept. 11 at Wisconsin instead. That left Arizona State with less than 12 months to fill the vacated date. It did so by scheduling a second FCS opponent, though for the purposes of bowl eligibility the Sun Devils can only count one of their lopsided victories over Portland State (which agreed, at no additional cost to ASU, to move up a visit to Tempe originally scheduled for 2011) and Northern Arizona. "The cancellation fee is not just a cursory or arbitrary part of the game negotiation," says Barefoot. "The folks that I talk to really try to maximize cancellation fees to avoid this type of situation. They consider that amount carefully."

When football schedule expansion was proposed, many argued it would allow schools the freedom to set up non-conference games that fans were hungry to see. But non-conference scheduling has only gotten more conservative, with established powers wary of facing true up-and-comers. Consider what the Chicago Tribune's Teddy Greenstein termed "a sorry slate" of opponents Big Ten schools paid to play Sept. 25: Akron, Austin Peay, Ball State, Bowling Green, Northern Colorado, Northern Illinois, Central Michigan, Eastern Michigan, Temple and Toledo, which managed to upset Purdue. Greenstein added that among ABC's marquee games that day was Eastern Michigan at Ohio State, a 42Â½-point favorite that won by 53.

For every Appalachian State (which, as the defending FCS football champion, returned from Michigan with $400,000 and a 34-32 victory over the fifth-ranked Wolverines in September 2007) and James Madison (which this year became only the second FCS football program to defeat a ranked FBS team when it earned $400,000 and a 21-16 win at No. 16 Virginia Tech) there are countless schools seemingly content to take their lumps and lump sums. Since 1996, FCS schools have found themselves on the short end of a combined 104-842 record against FBS teams, whose average margin of victory has exceeded three touchdowns each season since 2001.

Some programs have no choice but to look (and schedule) up. The Mississippi Valley State men's basketball team lost all 12 of its non-conference road games last season by an average of 25 points, but then went 8-10 in SWAC play, never losing more than three games in a row. The new season begins Nov. 12 at Georgia. The Delta Devils play their first home game Jan. 8. While Bright reports some desire among students to see their team play on campus during the fall months, "most of our fans understand," he says. "We try to explain to them that until we can get our program to where we don't have to play all these guarantee games, this is how we survive."