One on One: Personal Trainer David Geslak Helps Autistic Children

David Geslak's personal training career has taken him from making stronger men of major college football players to changing the diapers of 16-year-old boys. He has no regrets about the career change. 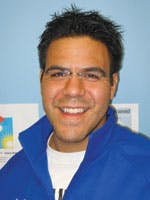 David Geslak's personal training career has taken him from making stronger men of major college football players to changing the diapers of 16-year-old boys. He has no regrets about the career change. Working in a local gym six years ago, Geslak was introduced to an 8-year-old child with autism, and he has been using exercise to help autistic kids better cope with their environment ever since. He also speaks to groups of exercise specialists and educators in the United States and abroad about his five components of physical fitness for children with autism (body image, posture, motor coordination, muscular fitness and cardiovascular fitness), and will soon publish an instructional manual based on his often painstaking experiences (it once took six months' worth of one-on-one sessions to teach a child how to learn a variation on the jumping jack). Paul Steinbach asked Geslak, 30, about his own personal challenges and rewards.

Q: How did the encounter with Joseph, your first autistic client, come to pass?
A: I used to train his father in a boot camp class. He asked, "Do you think you'd be able to work with my son?" He wanted me to help out with sports, and though he said something was wrong, it didn't matter to me. I said, "Sure." When I saw the boy's motor planning and realized things weren't as efficient as they should be, I wasn't worried about the sports, I was just worried about the motor planning. It took four one-hour sessions, but I taught him to skip forward and back. I was excited. He was really excited. His mom was so excited, and that's what has kept me in this. I still spend time training adults and working with athletes, but my greater mission has been to help these kids.

Q: What does structured exercise do for children with autism?
A: One of the first things parents tell me is that it gives their kids confidence and self-esteem. What's unfortunate is there are usually 30-plus kids in a public school gym class, and most of the time autistic kids are the outcasts - not only because of their behaviors, but sometimes the teachers are lost as to how to teach these children. That's why I try to speak to so many groups and say, "Listen, here's what needs to be in place." It's not easy, but we have to give these kids a chance. I see these children for their capabilities, not their disabilities.

Q: Have you ever struggled with a child to the point where it made you want to quit?
A: I still work as a one-on-one aide with one boy who is very challenged - cerebral palsy, autism, nonverbal. There was a whole week where he was literally chasing me, trying to hit me and hurt me, and I couldn't figure out what I was doing wrong. It was a trust thing. He's had a lot of aides in his past; they've come and gone. But for a week, yeah, I was down and out. I would go home teary-eyed: "I'm just trying to help him, and I've tried everything."

Q: During your days as a University of Iowa strength coach, did you ever see a football player display anything close to Joseph's excitement after a training session?
A: No. I have goose bumps right now. Every time I talk about it, it gives me goose bumps. And that's how I know this is what I'm supposed to be doing.