Last November, the Southington (Conn.) High School football team's 28-14 victory over rival Manchester High School was overshadowed by allegations that Southington Coach D.J. Hernandez, a 24-year-old former University of Connecticut quarterback and wide receiver, admitted to using the opposing quarterback's misplaced armband to call defensive plays. Video footage showed the play card attached to Hernandez's clipboard, but he claimed that he only used the card for four plays for his team's defense in the third quarter. 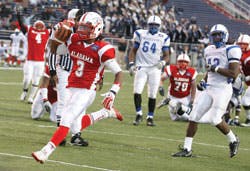 Alabama and Mississippi are two states that have adopted state-mandated sportsmanship programs. (Photo by Chip English/AP)

Last November, the Southington (Conn.) High School football team's 28-14 victory over rival Manchester High School was overshadowed by allegations that Southington Coach D.J. Hernandez, a 24-year-old former University of Connecticut quarterback and wide receiver, admitted to using the opposing quarterback's misplaced armband to call defensive plays. Video footage showed the play card attached to Hernandez's clipboard, but he claimed that he only used the card for four plays for his team's defense in the third quarter. Larry Williams, chairman of the Connecticut Interscholastic Athletic Conference's football committee, stopped short of calling the incident cheating, but called it a case of poor sportsmanship. The CIAC fined Southington $1,000 and the school was put on probation through the upcoming 2011 football season. Hernandez was suspended one game by his school and was ordered to take a sportsmanship/ethics coaching education class before the start of next season.

One month later, a basketball player from Desoto High School in Arcadia, Fla., slammed a referee to the ground after being called for a technical foul during a game. A disturbing video of the incident went viral. And while the player was suspended from school and is now facing criminal charges, the Florida High School Athletic Association plans to administer its own punishment.

The incidents in Connecticut and Florida are reminders of the unnerving trend of unsportsmanlike conduct in high school sports. Sportsmanship campaigns that have sprouted up around the country have shown that even a basic awareness of the issue and the creation of consequences for bad behavior can help tackle the problem. Some feel, however, that the only way to really improve sportsmanship is to institute state-mandated sportsmanship programs.

One obvious proponent of a mandated program is Brian Shulman, founder and CEO of Learning Through Sports, an education company that created a web-based program called STAR (Stop, Think, Act, Replay). Shulman began researching sportsmanship issues when his children started playing in youth sports leagues and he witnessed repeated incidents of bad behavior among parents, coaches and players. "We started doing research and talking to high school athletic directors and found that it was a big problem," says Shulman, author of The Death of Sportsmanship And How to Revive It. "Now you're seeing many kids ejected every year and you wonder what is going on."

Using data obtained from his research, Shulman created the STAR methodology, which incorporates a simple set of guidelines for behavior in game situations. "The only way I found you were going to fix the problem was to provide a solution to the systemic issue and also enforce the notion that everyone had to do the same thing," Shulman says. The 40-minute online course, which has spawned a college version, teaches kids how to positively deal with situations that might arise in competition. Students then need to pass a test to successfully complete the program. The company also has programs for parents, coaches and referees, as well as remediation programs for offenders who have been ejected from games. As in Hernandez's case, most offenders must successfully complete the program before returning to their team.

Alabama and Mississippi are two states that have mandated sportsmanship programs that incorporate STAR software. According to Shulman, over a five-year period when the program was adopted, Alabama and Mississippi have seen 78 percent and 68 percent reductions in ejections, respectively. Shulman attributes the success in these states to the action of their state legislatures. A guiding principle is that everyone in the state is held to the same standard when it comes to sports conduct.

While few would deny the benefits of a sportsmanship program, many school districts outside of Alabama and Mississippi don't see it as a viable option, given their shrinking budgets. "I'm not so naive as to think that every administrator who reads this article is going to be like, 'Yeah, I've got money to pay for a sportsmanship training program.' They're trying to fund jerseys and helmets and keep their soccer program going. I get that," Shulman says. But, he points out, all it takes is one incident like the one in Florida to make the investment in such a program worthwhile. That Florida school district now could face legal proceedings, increased insurance rates, and of course, bad publicity. Shulman points out that the program costs less than $5 per student, and in cases where it's a large group or statewide, it costs less than $2 per student. Many states have character education requirements, and a sportsmanship program could fit into that classification. Even individual school districts around the country, such as Northwestern Lehigh in Pennsylvania, have seen a reduction in ejections by adopting the STAR program.

The STAR program aside, many schools throughout the country remain committed to public awareness campaigns and voluntary sportsmanship initiatives to help curb the trend. The girl's varsity basketball coach at Whitesboro High School in Marcy, N.Y., has one of his athletes create an inspirational speech for athletes before sporting events. Mount View High School in Thorndike, Maine, has a similar program, in which the school empowers its student-athletes to help reverse unsportsmanlike conduct through regular meetings and discussions.

Shulman thinks these programs are valuable and important in building character on and off the field, but one drawback he finds with voluntary programs is that the schools that adopt them are usually the ones who don't have a problem with sportsmanship. "The ones causing the biggest issues are the ones who don't want to take the steps to do something like this," Shulman contends. "Can you impact a school? Sure. But if you really want to impact sportsmanship on a global basis, the only way that you'll do it is through a mandate."