Five years ago, KNIK Aquatics, a USA Swimming club based in Anchorage, Alaska, took over the city's learn-to-swim program at Bartlett Pool, the state's only 50-meter facility. 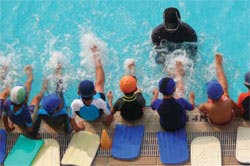 Photo of a youth swimming class(Istockphoto.com)

Five years ago, KNIK Aquatics, a USA Swimming club based in Anchorage, Alaska, took over the city's learn-to-swim program at Bartlett Pool, the state's only 50-meter facility. That arrangement, in which the municipality charged the swim club 30 percent of the revenues the club brought in through its lessons, made sense at the time. The city still provided the water and the lifeguards; in return, the club provided personnel the city couldn't afford to spare.

But as Anchorage's budget gap widened, the city increased the fees it assessed the club, forcing KNIK Aquatics to charge more for swimming lessons simply to cover basic costs. "I can no longer afford staff training," says Michelle Caldwell, volunteer director of the club's Learn2Swim program. "I have not bought new equipment in two years, except out of pocket."

As a result of the fee increases, Caldwell says fewer families are signing up their children for swimming lessons, which now cost $80 for six 40-minute sessions. That means fewer residents are learning how to swim in the largest city in Alaska - a state that boasts a longer coastline than all other states combined. "Alaska's drowning rate is incredibly high," Caldwell says. "Our kids go fishing and clamming, camping near rivers and open water, at very young ages. Our biggest issue is the temperature of our water, which leaves little time for rescue, even in the summer."

Anchorage is not alone in struggling to keep learn-to-swim programs afloat. Earlier this year, city officials in Reno, Nev., proposed cutting 13.5 positions from the city's parks and recreation department, along with $215,000 in annual operating expenses. That would have meant closing two of the city's four outdoor pools - which in turn would crowd out high school and private swim teams and reduce swimming lessons. (The Reno City Council later sacrificed new playground pads, park maintenance supplies and a little-used children's program to keep the pools open.)

"Obviously, the importance of learn-to-swim programs is that our drowning statistics haven't really changed, despite a lot of different organizations' efforts," says Mick Nelson, facilities development director for USA Swimming, which offers its own water safety initiative called Make A Splash. "If you don't teach people how to swim, they run the risk throughout their entire lives of something happening around the water - and they can't really avoid being around water anyplace on this planet."

Nationally, drowning remains the second-leading cause of accidental death among children, according to the U.S. Consumer Product Safety Commission. An estimated 300 children under the age of five drown in swimming pools and spas every year, and more than 4,200 kids 15 and younger visit hospital emergency rooms because of non-fatal submersion injuries, including those that result in permanent brain damage.

Some communities have fought to save learn-to-swim programs through private fundraising efforts, corporate sponsorships, joint ventures, or creative programming and staffing. But it hasn't been easy. "There are people making decisions in the public sector that don't have any idea what swimming lessons and pool operation are all about," Nelson says. "One of the first things that enters their minds is, 'If we cut back on programs or close the pool, that saves on staffing money, and that's the answer to the problem.' To them, swimming is just another piece - a very expensive piece - of the puzzle."

Last spring, faced with a reduction in tax revenues and a nearly depleted emergency revenue fund, city officials in Bartlesville, Okla., decided to close Sooner Pool - a 31-year-old 50-meter outdoor pool - and keep recently renovated but much smaller Frontier Pool open during the summer. But because of that pool's shallow depth, only first-level swimming lessons were offered, and lines to enter the facility often were long.

"It was all happening so fast; we didn't have a whole lot of time to think about what was going on," says Brian Olsen, co-chair of Sooner Pool Friends, a nonprofit organization of volunteers dedicated to raising enough money to reopen Sooner Pool for the 2011 summer season. "In the course of three weeks, if you hadn't been keeping an eye on the newspaper, Sooner Pool went from being open to shutting down. We didn't feel like people had a chance to voice their thoughts about this, so we just started a Facebook page. That got pretty wild."

Within 60 days, 1,000 people "liked" the page and used it to vent their frustrations. "People could say what they wanted and if it was really offensive, we would get it off our page," says Olsen, the father of a competitive swimmer who also lives near Sooner Pool. "But things still got hostile."

Despite what Olsen calls "the Facebook onslaught" against city officials, municipal leaders allowed the organization to include fundraising flyers in residents' utility bills. "We believe that brought in about $17,000, and the city did not have to do that," Olsen says. The group also generated thousands of additional dollars via a series of in-home ice-cream socials hosted by members of Sooner Pool Friends and donations from local businesses. 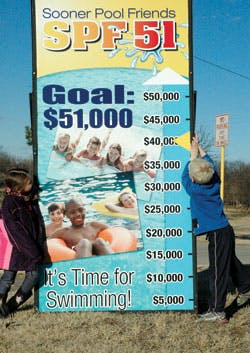 Money for swimming lessons was not included in the initial fundraising goal of $51,000 - a figure reached through consultation with the city via a memorandum of understanding that would allow the pool to open and operate on a bare-bones budget. Additional fundraising goals were assigned for swimming lessons (a goal that was reached with financial assistance from a local bank), extended lap swimming and a concessions stand expansion that is expected to bring in extra revenue. The organization, which acquired the nickname SPF51, likely will cut back on fundraising efforts later this year but remain intact as a community resource.

Michael O'Brien, the city manager for Worcester, Mass., decided not to wait for residents to take such initiative. When plans to replace nine aging municipal pools with three new aquatics facilities and five new spraygrounds fell through because of the turbulent economy, the city of 181,000 faced the possibility of being able to offer only limited swimming lessons.

Left with few options, O'Brien, a former parks and recreation administrator, gathered leaders from city government offices, local businesses, nonprofit organizations, colleges and universities, and neighborhoods and churches to develop the summer "Wheels to Water" program. Debuting in 2009, the program runs from early July through the end of August and provides transportation and all-day accommodations at public and private partner facilities for kids between the ages of 7 and 18. The free activities include swimming lessons, open swimming, sports clinics, arts and crafts, and a reading program.

The number of Wheels to Water participants more than tripled between 2009 and 2010 (to 1,468), as did the number of swimming lessons conducted (2,367). And O'Brien, who estimates that 35 organizations will be involved in 2011, expects participation this summer to double. Meanwhile, major donations keep rolling in, including $135,000 from the community benefits arm of UMass Memorial Health Care and $25,000 from Worcester Polytechnic Institute.

"I think in this day and age, with the realities of the recession, it really comes down to strategic partnerships," O'Brien says. "We need to leverage the best from everyone around the table, because no one can do it alone - certainly, government can't do it alone anymore."

To some extent, fundraising, even corporate fundraising, is futile, Nelson argues. "I'm not against fundraising, but it's strictly a Band-Aid answer," he says. "You can only ask for so much money, and you can't do it every year. People are only going to donate so much. Pools should become more self-sustaining through programming."

Nelson suggests offering a menu of learn-to-swim options, including small-group, semi-private and private lessons. Tiered programming should be based on what clientele can afford. The average cost of group lessons today is about $5 per class, Nelson says. But facilities can charge $15 or $20 for a single semi-private lesson (featuring two or three individuals with one instructor) and even more for private one-on-one sessions. "We're not trying to discriminate; we're trying to offer options. Everybody doesn't shop at Nordstrom's, but it still exists," Nelson says, adding that upper-level programming will generate enough revenue to sustain small-group, community-level programming.

The keys to success with a menu of options rest with ensuring proper staff training via curriculums such as those offered by The Y, the American Red Cross, Swim America or Starfish Aquatics Institute and then promoting those options not just on municipal websites and in seasonal programming catalogs but through church bulletins, retail outlets, chambers of commerce, school flyers, public libraries and golf courses, and home-school organizations.

"There are private people in small pools out there teaching a million dollars a year in swim lessons," Nelson says. "Those people should be no different than a person who works at a park district who has committed to make learn-to-swim his or her career path. The difference is that the private sector has more marketing tools and knows a little bit more about how to present the programs to the community. I'm not saying that we need to compete and put everybody in the private sector out of business, but I think everybody should be able to compete on an even playing field."

Joint-ventures are one way organizations are trying to at least open up the playing field. In Abilene, Texas, the city's Parks and Recreation Board recently approved sharing operational duties of the Stevenson Park and Rose Park swimming pools with the YMCA of Abilene. The two-year agreement calls for the Y staff to operate the pool and allows the organization to offer outdoor swimming lessons to complement lessons at its indoor pool. Meanwhile, the city - which lost $50,000 running both pools last year - will handle maintenance duties.

And in Menasha, Wis., a new collaboration with the YMCA of the Fox Cities to offer reduced-price season passes at the Jefferson Park pool this summer also could result in positive changes for swimming lessons, lifeguard recertification and pool operations, officials say. "We've been told that a lot of the Y membership wants an outdoor experience," Brian Tungate, Menasha's parks and recreation director told Appleton's Post-Crescent. "If we can offer one at less cost, and they like our facility, and we are able to generate greater attendance, that's a positive for us and a positive for Y members."

Regardless of the steps municipal pool operators take to keep their facilities open and their programs intact, alternative models are becoming the new norm. Their goal, however, remains the same as always: to teach individuals how to swim.

When asked what advice she has for fellow aquatics administrators facing cutbacks in - or the elimination of - swimming lessons, KNIK's Caldwell responds solemnly: "Pray," she says. "I really believe, and it scares me to say this, we will have a tragedy. It will take a drowning to change people's minds. I would like to ask those voting on budgets, 'Are you willing for it to be your kid, your grandkid or your spouse?' We spend millions of dollars on requiring seatbelts, bike helmets, crosswalks, car seats and vaccinations. So why not on acquiring a lifelong skill like swimming?"