Vinny Ciurciu, a linebacker for the NFL's Detroit Lions, suffered two concussions during the 2010 season. He sat out two games after the first one, and then a glancing blow to the head on his return was all it took to trigger renewed symptoms. 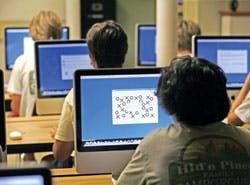 Cognitive tests, like this one involving the Thornton Academy boys' soccer team, gives coaches and athletic trainers a baseline against which to compare post-concussion tests. (Photo by Gregory Rec/Staff Photographer/The Portland Press Herald)

Vinny Ciurciu, a linebacker for the NFL's Detroit Lions, suffered two concussions during the 2010 season. He sat out two games after the first one, and then a glancing blow to the head on his return was all it took to trigger renewed symptoms.

"Once that happened, it really opened my eyes," says Vinny's brother, John Ciurciu, recreation director at Franklin Lakes (N.J.) Recreation and Parks Department and a former Rutgers University fullback. "He was barely touched, he got a concussion, and he was done for the year. I was saying to myself, if that's happening at that level, can you imagine what's going on with the little kids? We've got to look at somehow protecting these kids and figuring out a way for them to come back safely."

This year's large-scale efforts to protect the kids have included a number of legislative maneuvers, including the June passage of North Carolina's Gfeller-Waller Concussion Act - named after two football players who died after suffering concussions in 2009. One head-injuries expert calls it the best in the country because of its strong educational component. Earlier, in January, the "Protecting Student Athletes from Concussions Act of 2011" (H.R.469) was introduced in the U.S. House of Representatives by Rep. Timothy Bishop (D-NY); the measure, which is in committee, would require state educational agencies to issue regulations on concussion management and care in order to receive federal funds.

Ciurciu's effort, on the other hand, is more micro than macro. After the borough approved the new policy, he selected Pittsburgh-based ImPACT Applications Inc. (ImPACT stands for Immediate Post-Concussion Assessment and Cognitive Testing) to provide the computer tests, which 67 Franklin Lakes football players ages 11 and up took in June. The 30-minute test evaluates aspects of normal brain function, including memory and reaction time, and the results can be used to help measure progress made by a player who is recovering from a concussion. In a concurrent youth sports application of the technology, youth hockey players in western Pennsylvania in May began receiving free baseline testing through the Pittsburgh Penguins Foundation.

In another sign that concussion testing at the youth sports level is entering the mainstream, Wausau, Wis.-based Axon Sports in April announced the donation of 25,000 of its cognitive baseline tests to schools, clubs and youth sports organizations. Named the Computerized Cognitive Assessment Tool (CCAT), it measures attention, working memory, and speed and accuracy in thinking. Axon claims that its online test requires only 10 minutes, with immediate results. Test-takers get an online account and their results are archived for 15 years for use by coaches and medical personnel. In a related initiative, Axon also announced its involvement in the Peterborough (Ont.) Youth Sports Concussion Program, a first-in-Canada collaboration between primary care providers and health specialists that will "establish standardized guidelines for concussion management for all health care providers across the five Peterborough Networked Family Health Teams."

A 2007 study by the Centers for Disease Control and Prevention, which compiled injury data from 2001 to 2005, found that 10- to 14-year-old males and females accounted for the highest rate of emergency room visits for sports- or recreation-related traumatic brain injuries, and that football was one of five activities associated with the greatest number of TBI-related emergency-room visits. According to the American Academy of Pediatrics, the number of emergency room visits by athletes ages 8 to 13 who sustained concussions doubled from 1997 to 2007.

Yet, in spite of these figures and the development of grassroots efforts such as the one in Franklin Lakes, the National Recreation and Park Association is taking its time getting behind cognitive baseline testing. Says Bill Beckner, the association's research manager, "In recent years, there has been a growing concern in the U.S. regarding the potential for life-altering injuries for young people due to the effect of high-impact collisions in games and practice. NRPA continues to monitor the issue and related research to determine when or if the findings warrant policy guidance to the nation's local park and recreation agencies."

James Kozlowski, associate professor at George Mason University's School of Recreation, Health and Tourism and a legal/legislative policy consultant to the NRPA Division of Public Policy, goes even further. Although he's not critical of the Franklin Lakes policy, he doesn't recommend other park districts expose themselves to possible litigation.

"It just seems like it's opening a whole unnecessary can of worms," Kozlowski says. "With testing, you assume a duty you don't otherwise have. You're asked to perform it non-negligently. You've got what amounts to a medical screening procedure taken on by a non-medical group in sort of a knee-jerk reaction to the public's general concern about concussions. That's not the task of a sports coach. If you want to take on that sort of responsibility, just require some sort of medical clearance like schools do. The sports organization then can reasonably rely on the screening information provided by a physician."

Ciurciu, though, remains committed to tackling concussions head-on. In a seminar for coaches, athletes and parents to be held this month, his program's coaches will be encouraged to err on the side of caution, even at practices. He says that, for the first time, his department will have certified athletic trainers from a local medical and sports rehab center at football games. Franklin Lakes' policy also states that any athlete judged to have suffered a concussion will not participate for two weeks.

"We as a town have said you're out for two weeks automatically. No practice, either. If you're done, you're done," says Ciurciu. "You can only come back if you're seen by your medical doctor and you get a note that says you're cleared. Step two is you have to retake the test and score your baseline score or better."