You remember the recruiting commercial: The United States Marine, filling out his dress blues, having been forged to be every bit as hardened and sharp as the gleaming saber he snaps to his shoulder. The Few. The Proud. 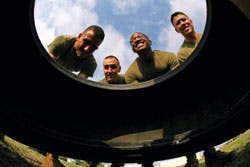 You remember the recruiting commercial: The United States Marine, filling out his dress blues, having been forged to be every bit as hardened and sharp as the gleaming saber he snaps to his shoulder. The Few. The Proud.

Now try to square that square-jawed image with one Marine's genuine dread of something called "The Inchworm."

What's to like? The Inchworm involves an individual starting in the push-up position, then inching his feet toward his hands before inching his hands forward and into a return push-up position, from where (surprise) the Marine does an actual push-up. This methodical maneuvering continues for a full 15 yards, much to the anguish of any and all involved. "It's very difficult to do," says Chapell, adding that only when it's done can the real workout begin.

That's because that particular strength and flexibility exercise is just one of two dozen exercises comprising the dynamic warm-up to the USMC's new High-Intensity Tactical Training - a progressive, functional workout regimen specifically designed to prepare Marines for the rigors of modern combat. "A lot of what they're doing now is the traditional endurance-type training with long-distance runs, whereas the HITT program is geared more specifically toward power, speed and agility," says USMC combat fitness program manager and HITT architect Ryan Massimo. "It's more of the short bursts of speed and explosiveness that they're going to see in combat-specific movements. In combat, they might have to sprint 25 yards and be agile enough to get around gunfire, the enemy or any other obstacle that's in their way." 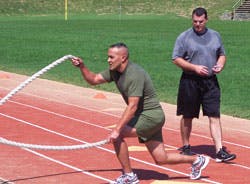 Beta tested at a half-dozen sites this summer and fall, HITT represents an enhancement of the Semper Fit functional-strength program developed in 2009. It looks to replace the more intense (but unsupervised) off-the-shelf workouts Marines have often sought online and in magazines with what Massimo terms a "career workout" that they can truly call their own.

"Unlike a six-week or 90-day workout, this is something that people will be able to do throughout their career as an active-duty Marine," Massimo says. "An 18-year-old Marine coming straight out of boot camp might or might not be educated in terms of lifting techniques and the biomechanics necessary to prevent injuries. There are a lot of progressions that go into this program. We start out slow and progress at the Marine's level of experience."

Injury prevention is the first of five components around which the program is built, followed by strength and power, speed and agility, core stability and flexibility, and nutrition. Hour-long workouts are taught initially by Semper Fit staff holding Certified Strength and Conditioning Specialist credentials. For now, the workouts are meant to be conducted voluntarily during a Marine's own free time, but the belief is that HITT will eventually be incorporated into or take the place of standard physical training (push-ups, sit-ups, distance runs and the like) that Marines are required to undertake within their respective units a minimum of three hours per week.

Results of the six- to 12-week beta tests, which involved baseline fitness assessments and benchmarking, will be presented at the Athletic Business Conference in December, and the program is set to officially roll out later that month or early next year. Anecdotal evidence suggests that HITT is, well, a hit among Marines. "We're getting feedback such as, 'This program kicks my tail,'" Massimo says. "It's the type of intensity they like. They don't want something that's going to take them two hours to do. This program is tailored toward a 60-minute workout that basically is high-intensity, but done in a safe and effective manner with Semper Fit staff running it."

Exercises may incorporate holding the end of a heavy rope while engaging in specific arm motions, teaming up to flip an enormous truck tire across an open field, running with 50-pound ammunition cans and pressing them overhead, as well as covering 100 meters with a simulated casualty draped across one's shoulders. It's no coincidence that several HITT exercises replicate not only actions a Marine might see in combat, but also aspects of the USMC's annual combat fitness test, which grades individual fitness levels in terms of combat readiness.

Chapell has been among those Marines patrolling Iraq's scorching summer landscape while wearing 60 pounds of gear on his back, plus his weapon, ammunition and body armor. "It will take its toll on you if you're not in the best shape you can be in," he says.

Though he didn't have the program to prepare him for two tours of duty in Iraq and one in Afghanistan, Chapell's experience with HITT over the past four months has him convinced it's a difference-maker. "This training program is top-notch, and I say that honestly," says Chapell, who engages in physical training five to six times a week. "Having been in the Marine Corps 21 years, I've tried all different kinds of workouts and PT plans, and this one brings it all together, and does so in a logical way. You progress and get better and better with each workout. I'm almost 40 years old, and I'm in some of the best shape I've been in in a long time. The HITT program really helped get me there." 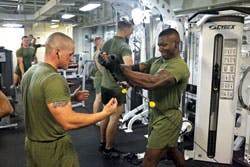 Functional-strength equipment, such as the Cybex Bravo, will soon be incorporated into HITT centers on Marine bases nationwide. (Photo by Sgt. Jesse Johnson, courtesy of United States Marine Corps)

While certain aspects of the workout can be conducted outdoors, the HITT program will have a permanent indoor presence, too. HITT centers have already been established on at least three Marine bases (Camps Lejeune and Pendleton, and Air Station Miramar) by converting underutilized space or space previously dedicated to traditional functional-strength training. Marine Corps Air Station New River in North Carolina will get the first newly constructed HITT facility, outfitted with a 30-yard sprint lane, a 20-by-30-foot swatch of synthetic turf for agility drills, and rubberized flooring to accommodate a variety of functional exercises. "We're trying to put a facility together that emulates a human-performance facility," says Massimo, a former professional baseball player who served as performance director at Velocity Sports Performance in Ashburn, Va., between stints as a college strength coach and fitness director. "They're training on safe surfaces. It's not concrete, and it's not carpet flooring. It's all surfaces that are going to help their movement technique."

When asked if sand training, like the kind employed by the University of Michigan football program, would make sense in preparing Marines for deployment, Massimo adds, "I'm an advocate of it, and that's something we're exploring. Again, the whole reason for the program is to prepare them for what they're going to see in combat. So the more specific we can get to that, the better. New River is actually thinking about putting a sand pit outside the facility. It all depends on space requirements."

At 4,000 square feet, the facility at New River (home to 6,500 active-duty Marines) will be roughly half the anticipated size of the largest HITT centers, and some USMC installations will have more than one. Camp Pendleton, which houses 56,000 Marines, could accommodate as many as 10 separate HITT centers, according to Bryan Driver, who handles public affairs for the Marines' Morale, Recreation, Wellness and Business Operations Division at Marine Corps Base Quantico, Va.

The indoor facilities will allow for additional HITT endeavors involving TRX suspension-training equipment, Jacob's Ladder climbing equipment, Cybex cardio and functional-strength equipment, and handheld kettlebells. The key in any piece of chosen equipment, according to Massimo, is force production. "Some of the equipment we're going to be utilizing is equipment that produces force," he says. "Olympic lifts produce force from the ground, but we also want to produce force while Marines are running, hiking up a hill with all that gear on their backs or doing any type of movement in combat. So while Olympic lifts teach a stationary force production, we use other pieces of equipment that emphasize mobility as force production, as well."

How each HITT center should look is not written in stone, but the goal is to standardize the program's implementation among USMC installations, according to Massimo. And while HITT remains a program Marines can call their own, aspects of it might one day spread throughout the Department of Defense. "A lot of the branches are constructing facilities toward combat readiness and resiliency," Massimo says. "What's coming down the road is possible research of this program, where they're looking at this being a best practice in terms of a high-intensity program DoD-wide."

As for today's chiseled Marine? You can bet those dress blues have a sweat-soaked T-shirt behind them (figuratively speaking). The Few. The Proud. The Fit.

"When you're done with your dynamic warm-up, you're really sweating," Chapell says of the 10-minute HITT prelude - Inchworm and all. "To a lot of people, the dynamic warm-up in itself is hard enough to be considered a workout."

Driver, who served in the Army, admits he's not a "PT freak," but he has a new appreciation for those among the Marines who are. "I went out and watched them do this," he says of an actual HITT workout. "The guys were suffering. They were like, 'Oh, God, I hate this.' They hate it, but they love it."