If you want to know just how desperately educators in New York City are trying to make fitness a priority for their students, look no further than Public School 197 in Queens.

If you want to know just how desperately educators in New York City are trying to make fitness a priority for their students, look no further than Public School 197 in Queens. The school's 550 mostly poor African-American and Latino students in prekindergarten through fifth grade only take one physical education class every seven days - far below the state's requirement of 120 minutes each week. But thanks to a partnership with the New York Road Runners' Mighty Milers, fourth- and fifth-graders can participate in an optional daily running program at 7 a.m. Right now, that's the best P.S. 197 can do.

"When you're given a limited budget, you have to ask yourself, 'What's the priority?' " new principal Christina Villavicencio told The New York Times in October. "Should I hire another science teacher or a gym teacher?"

That's a dilemma facing administrators around the country. Despite local and federal efforts to combat obesity in elementary, middle and high schools by promoting nutrition and exercise, a combination of budget cuts and testing pressures has made physical education and other efforts to boost kids' fitness levels expendable in many districts.

An educator in Amarillo, Texas, actually expressed relief when state lawmakers this year relaxed a four-year-old mandate that schools give annual fitness tests to all students in grades 3 through 12. They now are only required to test students taking physical-education classes or those involved in a P.E. substitute such as interscholastic sports or marching band. In other words, kids who least need the tests are the ones subjected to them.

"It was a great disruption," Gary Angell, executive director of the Amarillo High School cluster, told the city's Globe News in September, referring to the all-student mandate, which pulled students out of the classroom to participate in the fitness tests.

Bruce Menin, vice president of the Newburyport (Mass.) School Committee, echoed Angell when arguing in September against the proposed Senate Bill 216, which would base state P.E. standards on national standards, ban P.E. waivers for student-athletes and appoint a state official to ensure school compliance with the law. He even went so far as to call P.E. courses "token" classes. "We limit the academic choices students can make so they can play volleyball during the school day," he told the state Legislature's Committee on Education.

But, as many educators already know, overwhelming evidence points to a positive connection between academic performance and physical activity, measured by grades in core subjects and standardized test scores. That's why the Bakersfield (Calif.) City School District ultimately decided against taking the unprecedented step of asking the state's Department of Education for a waiver to reduce the required number of P.E. minutes it provides seventh- and eighth-graders from 400 every 10 days to 200 in order to devote additional classroom time to students struggling in English and math. Over the years, the district has laid off half its P.E. instructors, with fewer than 20 now spread throughout its 40 campuses. As board member Andrae Gonzales told NBC affiliate KGET-TV after the vote, "We have to make sure [students'] academic needs are met, but also their physical needs."

While all 50 states recommend or require a specific number of P.E. minutes per week, "nobody is holding states accountable to meet them," says Judith Young, vice president for programs at the Reston, Va.-based American Alliance for Health, Physical Education, Recreation and Dance. "Illinois is always touted as a state that requires all kids in all grades to have physical education every day, but nothing is done if they don't."

Nevertheless, educators have been striving to meet students' physical needs from an early age for decades. P.E. classes have evolved from regimented and disciplined curriculums in the '60s, to sports that were playable within the four walls of a gymnasium during the '70s, to an increased focus on written tests and skill assessments in the '80s. Then, at the turn of the century, an interest in lifetime fitness courses including climbing, kayaking, inline skating, cycling, dance, yoga and weight training took hold, spurred by the Carol M. White Physical Education Program, which has awarded nearly $700 million in grants since 2001 (including $80 million in 2011) to improve physical education efforts across the country.

For now, though, some districts appear to have taken P.E. as far as they reasonably can. A report released in October by AAHPERD indicates that only 16 percent of elementary schools - traditionally the place where P.E. classes are part of the academic day - currently provide physical activity opportunities for students before, during and after school. The percentage dwindles to 13 percent for middle schools and 6 percent for high schools.

In fact, most schools aren't even coming close to offering the five-pronged Comprehensive School Physical Activity Program that AAHPERD advocates in its Let's Move in School campaign. That approach includes P.E. classes, before- and after-school physical activity programs, classroom activity breaks, administrative support, and family and community involvement. Given the limitations facing schools at all grade levels, is it even realistic to expect schools to engage in such a comprehensive program? "You need someone to coordinate it, and that's what a director of physical activity does," Young says. "If, in fact, it is going to increase the academic performance of kids and make them healthier and help manage obesity rates, it certainly would be worth it. We're talking about 10-minute activity breaks. And if 10 minutes is going to make a difference on the test that you're going to give kids for the rest of the period or the next period, I think you can make a case for spending that time."

One way to make that happen is by lengthening the school day - an idea that has been tossed around for decades but only recently tried in some schools. This fall, River Forest School District 90 in suburban Chicago tacked on an additional 40 minutes to its six-hour-and-15-minute day, allowing administrators to (among other things) expand P.E. classes from four days a week to five. 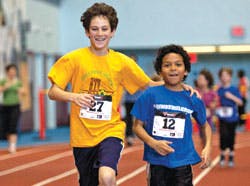 On the other hand, schools like New York City's P.S. 197 are making the most of before- and after-school hours by turning to Mighty Milers, a local program that last year celebrated its establishment in every state. During the 2010-11 school year, 82,000 national participants collectively logged almost three million miles. Developed in 2004 by the New York Road Runners organization, Mighty Milers is a structured, turnkey fitness program in which students (more than 75 percent of whom qualify for free or reduced-price lunches) run or walk while learning how to integrate healthy habits into their lives. "Getting kids moving regularly is critically important," says Cliff Sperber, executive director of NYRR's Youth and Community Services. "Our goal is to instill the healthy habit of running, and by doing so improve fitness, combat obesity and build self-esteem and character - vital components of a quality education."

Even a temporary fitness fix is better than nothing. That's one of the objectives of the U.S. Army Strength in Action Zone. This mobile interactive experience travels to schools, local festivals and larger events, allowing students to participate in the type of fitness elements that build soldiers' strength and stamina. A 54-foot-long truck that contains a stage, three large video screens and an audio system provides space for push-up and sit-up competitions, and an obstacle course and climbing wall encourage students to climb, crawl, balance, hang and jump.

Regardless of the physical activities administrators provide for their students, it's important to encourage kids to participate in those same or similar activities on their own, Young says. For example, if a certain group of students enjoys the volleyball unit in P.E. class but doesn't want to try out for the school team, instructors should let them know about teen leagues forming at the local YMCA or municipal recreation center. Same goes for kids who enjoy the climbing wall unit; educators need to point them toward climbing gyms in the area or organize their own school climbing group.

"One of the places we go next is making P.E. activities part of the co-curricular program, so that there are clubs for kids to do the things that were introduced in physical education classes," Young says. "That way, it's not like kids are learning in a vacuum. When we teach them science, we have labs that help them connect a specific activity to the real world. We need to do that with physical activity, as well. The amount of activity we can provide in a P.E. class is limited, so we almost need to be assigning them things to do outside of school to get them in the mode of doing regular activity."

States have yet to mandate P.E. homework, but some have significant physical fitness legislation pending or have already enacted it. In addition to Massachusetts SB 216, lawmakers there are considering two additional bills that spell out proposed grade-by-grade P.E. standards and establish a physical education pilot program at six or more public schools. And a state representative in Michigan - which claims an estimated 800,000 obese children - has introduced a bill that would require every public school to provide specific time commitments to physical education and health programs while ensuring that the number of students per teacher in P.E. and health classes are the same as those in other academic courses. A similar proposal failed in 2007.

That was also the year that persevering U.S. Sen. Tom Harkin (D-Iowa) and U.S. Rep. Ron Kind (D-Wis.) first introduced the Fitness Integrated with Teaching Kids (or FIT Kids) Act. Among other things, that law would require schools, districts and states to make available to the public information on the quantity and quality of physical education offered - including whether schools require age-appropriate P.E. curriculums that adhere to national guidelines, a description of the amount of time that K-12 students are required to spend in P.E. compared to the recommended national standard, a description of the facilities available for physical education in the schools, whether physical education teachers are required to be state-licensed or certified, and whether a school has a health and wellness council.

Another component of the act, which was pending in House committees as of this writing, includes professional development support for teachers and principals to promote lifetime physical activity and healthy lifestyles to students. To that end, AAHPERD recently piloted a program in Kansas and Texas to help P.E. teachers coordinate more school-wide approaches to physical activity. It is expected to roll out nationally this spring.

With a number of solutions to help schools determine where fitness fits already in motion, only time will tell if any have real legs. Yet Young is confident the national discussion is at least on track. "I'm always optimistic that we're moving in the right direction," she says. "Obviously, we've got a lot of stressors right now. But compared to earlier times, there is much greater awareness about the importance of keeping kids active."