A dedicated push by communities across the country to get youths off the couch and out playing appears to be paying off. 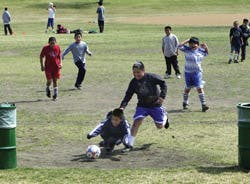 A dedicated push by communities across the country to get youths off the couch and out playing appears to be paying off. The Sporting Goods Manufacturers Association's latest statistics, released in September, indicate that almost 70 percent of children between the ages of 6 and 17 are involved in some type of team sport. Between 2009 and 2010, rugby and lacrosse saw the greatest increases in participants, by 50.7 and 37.7 percent, respectively, while more traditional sports such as baseball and soccer posted modest gains.

All of that increased participation means increased demand for sports fields, creating a new kind of competition as sports leagues vie with each other and local recreation programs for prime practice time and space. The kids lucky enough to participate subsequently endure less-than-optimal conditions, while others end up turned away from programs due to lack of resources. All the while, recreation department administrators struggle to balance the necessity for field maintenance with users' need for field space.

The answer, as communities across the spectrum have recognized, is simple: Build more sports fields. The execution, however, is a bit more complex.

For many communities, finding usable land is a greater challenge than finding funding. In England, recreational fields have become a protected resource, with special policy provisions preventing recreational buildings, land and playing fields from being redeveloped for anything other than new recreational use. Closer to home, even where land sits unused, recreation departments often find themselves clashing with conservationists, or neighbors who don't want a sports field next door - particularly one lit for nighttime use.

In March, the recreation department in Lexington, Mass., suffered a setback in its search for available space when the city's board of selectmen voted against a proposal to turn a portion of an eight-acre tract of city-owned land into a multipurpose field, instead favoring a community farm and housing development.

"With the increase of participation in youth soccer, lacrosse and field hockey, the multipurpose fields are where we most need to make some increases to our inventory," says recreation supervisor Peter Coleman. The city's current fields - three synthetic turf and two grass - endure approximately 50,000 playing hours each year, with an additional 2,000 requested hours denied.

Which teams sit on the sidelines depends on how a community operates its program. Lexington prioritizes groups into five tiers, with the top tier of recreation and school programs getting top priority. It's often the bottom tiers, which include outside tournaments and camps as well as out-of-town groups, who are turned away, but not always. "We have youth soccer and lacrosse looking for multipurpose fields in the fall and spring," Coleman says. "When we have both organizations looking for fields during prime times - weekends and weeknights - that's when we have the most conflict. We try to make everyone happy with the field allotment, but it's not always easy."

With few other prospects for the creation of new playing fields, the recreation department is turning its attention instead to maximizing the use of the fields it has, says Coleman. "Going forward, we're going to look at installing lights at more of the fields in town, which would increase the playability as far as length of each day. We currently only have one lighted softball field and one lighted baseball field. We don't have a lighted multipurpose field."

The extra hours of playability afforded by field lights can make a significant difference and cost significantly less than new fields, but they are often a tough sell to neighbors concerned about possible glare and spill. However, no amount of lighting will make any difference if the field itself is unusable. In addition to seasonal limitations, natural grass fields are also more sensitive to overuse and weather conditions. "If the weather is questionable or field conditions aren't suitable for use, we try to be proactive and say, 'Let's not use it for the day, let's let it dry out,' " Coleman says of the city's two grass fields. "The last thing we want is for a group to go out and play a couple of hours, then have to take the field offline for a month or an entire season."

Replacing natural turf with synthetic turf can more than triple the number of playing hours a field can endure during a year, according to the Synthetic Turf Council, and can stand up to a wider range of conditions. "In our five-year capital plans, we're looking to reconstruct the track around one of our grass fields, and we are looking to install synthetic turf on that field," Coleman says. "That's five years out at this point, so not an immediate help, but it's something we're striving for."

The Lexington recreation department has also been able to alleviate some of the current demand by partnering with the local Lexington Christian Academy. "They don't have a skinned softball field, so they use one of the city's fields during the springtime," says Coleman. "In exchange, they have a multipurpose field that youth lacrosse is allowed to use two nights a week and youth soccer two nights a week, and that's worked well for everybody involved. Being able to get on another full-size field has been beneficial for the coaches and the players."

Coleman says that youth leagues have been very patient with the city throughout the entire process. "They understand that we're in a difficult situation. We've been straightforward with them, and have preseason meetings with our leagues to come up with solutions and compromises."

While communication with youth league organizations is important to keep tensions down as communities seek long-term solutions to field shortages, the input of the end-user can also prove key to successful solutions. The City of Tracy, Calif., has been looking for a solution to its sports field shortage since 2006, when a needs assessment predicted the city would require an additional 26 fields by 2015 to keep up with demand. The city had the space - farmland that had been purchased from the defunct Holly Sugar Company - but the cost to build a complex that would satisfy all the leagues' needs was just too much.

"It's about a $90 million project, and the operating cost to take care of the property was in the millions," says Tracy parks and community services director Rod Buchanan. With the available funds, the city could build four to six fields, falling well short of demand. Seeking other options, Buchanan did what many communities are doing and looked to the city's 11 youth sports leagues, the fields' main users and those who had the most to gain from building additional fields.

"I approached the leagues and asked, 'Would you be interested in a long-term lease and help leverage the available funds?' They said yes," says Buchanan. Rather than spend its limited funds on a handful of fields, the parks department is providing the initial infrastructure, and next year four leagues - one soccer and three baseball - will come in and construct the actual fields. The arrangement, similar to many community public/private partnerships but much larger in scope, will allow a total of 23 fields to be built.

While the agreement puts the onus on the leagues to come up with the initial funding and tend to ongoing maintenance, it also gives them a greater degree of control over their playing fields, from maintenance and scheduling to building concessions stands. "It's definitely a win-win," says Buchanan. "From an economic development standpoint, they're able to hold tournaments, bring people in from out of town, and do quite a few things that they can't do now based on the limited availability."

Opponents of public/private partnerships worry that giving leagues more ownership over city fields will crowd out other community programs, but the leagues won't have exclusive use of the fields. Their leases with the city specify certain days that the city will have access to the fields, as well as put the leagues in charge of renting out their fields to other organizations - work that had previously fallen to the city. "It opens up more capacity on our existing system," adds Buchanan, noting not only the reduced burdens on the city's labor force, but on the fields, as well. "They get permanent fields to meet their needs, and we're able to get our fields back for other programming that we want to do."

There are still a lot of details to be worked out, and new problems will no doubt surface along the way, but Buchanan says the youth leagues have been very involved and will continue to work with the city to address issues. Everyone is looking forward to seeing the project reach a successful completion. Says Buchanan, "The day somebody plays a game on one of those fields is going to be a very good day."