Capitalizing on the 'Strongman' Training Trend 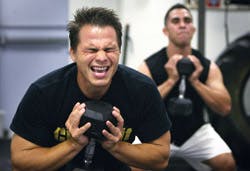 CrossFit is old school, in environments that are anti-health club, but it represents an opportunity for facility owners. (photo © San Antonio Express-News/ZUMAPRESS.com)

Many years ago, before age and injury took their toll, one of our favorite pastimes was strongman training. Actually, it was one of Rob's favorite pastimes. He and several members of our staff would engage in the training. Barry's job was to pay for the necessary toys.

And, oh, what toys they were. We started with sandbags, crafted from military-grade duffel bags and weighing 60 to 100 pounds. Then we got specially welded, enormous dumbbell-like devices, followed by "the log," which is the length of a barbell but the circumference of, well, a log. We spent one weekend driving through an industrial neighborhood retrieving discarded tractor-trailer tires. A trip to eBay yielded an anvil, and it was only three hours each way to actually go get it.

Then we got the stone - 300 pounds of solid rock, carved into a perfect sphere. It was beautiful in its simplicity and elegance, which was obviously lost on the truck driver who delivered it.

Every weekend, our toys came out and the boys got to play. All we needed was ESPN to cover it. There was Rob, carrying a 100-pound sandbag about 100 yards up a hill. There was Ray, flipping a tire across the parking lot. There was Paul, pulling that stone up his shins, to his thighs and then barely standing up straight with it.

If only we had given it all a cool name, made an infomercial and certified other people in what we were doing, because here in 2012, we'd be all the rage.

Back then, we would politely tell members that they couldn't participate. These were dangerous exercises that we were doing for fun, and we didn't want to get sued when someone got hurt. In fact, it all ended when Rob blew out one of his biceps because he had to - just had to! - flip that tire one more time. Imagine if that had happened to a member, regardless of the quality of our liability waiver.

Certainly, we knew why some of those guys and girls wanted to do our strongman training with us. They were fit, and they were eager for a new and exciting challenge. They wanted to see how far they could push themselves. They loved the idea of using gear that wasn't found in the gym and using it outside of a typical gym setting. Now, 10 years after Rob's bicep blowout, the desire among members for nontraditional strength training is the biggest trend we're seeing in health clubs, and it's exciting for our industry.

We've all spent the past 10 years chasing the deconditioned and beginner market, and for good reason: The majority of U.S. consumers are not members of health clubs and are in bad physical condition. In our clubs, we are actually doing a better job than ever at appealing to first-time joiners and former club members, offering what most people really want, which is a program to lose weight.

But there are huge opportunities with members who are already fit and those who view themselves as being "above" weight-loss programs, introductory training sessions and meal planning. These are people who are, or who used to be, hardcore. They are in their 30s or 40s, but think that they are in their 20s or 30s. They have money to spend to have the kind of athletic and fitness experiences they recall from high school and college.

The demographic trend is there, evolving over the past 10 years, and several businesses are already exploiting and legitimizing the business case for reaching out to these customers. Boot camp training was one of the first trends, and P90X went right at this market. We know former accomplished high school and college athletes who sheepishly told us how they were doing P90X at home because they were embarrassed by the shape they had let themselves get into, and they wanted to feel like athletes again.

CrossFit has grown as a grassroots effort year after year, and is now almost a household name among motivated fitness people (including some athletic directors). It's old school, with exercises that regular people never do (power cleans, anyone?) in environments that are anti-health club. We have a formerly scrawny friend who works in software sales who has photos of himself, shirt off, training in a garage. Then there's Combine 360, which offers everyone the chance to train like an elite athlete. Both these programs have heavyweight backing - Combine360 is partnered with Under Armour, CrossFit with Reebok - so your members are certain to ask about them, as they have with Zumba, BodyPump and other branded offerings.

How can clubs capitalize on these trends? First, take an honest look at your membership base and your current programming. Are members walking around with iPhones, mimicking CrossFit training videos? Have you successfully implemented boot camp or suspension training? If so, you are already part of the trend, because you are getting people to think about pushing themselves harder and moving them away from typical club-style resistance training. Do you find yourself needing more open space on your floor, with members wanting to do plyometrics and medicine ball exercises on their own? We had a member recently comment on how crowded our open space was because "everyone" was doing CrossFit-like exercises.

If you think you have the client base and interest, then you can start to introduce this style of training. Naturally, you need qualified trainers. If you want to use an outside program like CrossFit, you will need to look into certification. Or, you might have an experienced Olympic-style lifter on your staff who can begin introducing new techniques to interested members. Maybe these techniques can be brought into your clients' personal training sessions, or into your group and boot camp sessions. You might be able to build whole new groups around this style of training.

Whatever you do, recognize that this trend is growing, and it's not just for your "weight room guys." You likely have closet athletes and would-be superstars throughout your facility, and they are increasingly hearing about and seeing this style of training. This could be a great way to differentiate your gym from a facility down the street.

It might make your lawyer cringe, and you'll want to make sure that your liability waiver is well worded, but more people are going to want to go "old school." Give these people what they want. We're pretty sure that the 300-pound stone and giant tires are still out of bounds, but one day you may see our infomercial.