How Step Into Swim Can Help Aquatics Facilities

During the final months of 2012, bad news for community pools hit residents like a crashing belly flop: 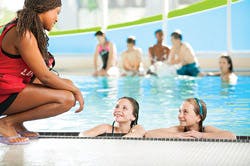 During the final months of 2012, bad news for community pools hit residents like a crashing belly flop:

â¢ Members of the school board in Virginia Beach, Va. - a city surrounded on two sides by large bodies of water -and linked by a series of lakes, bays, creeks and rivers - voted not to pursue a proposed after-school swimming program partnership with the city council. No money and no time, they said.

â¢ The Andover (Minn.) City Council acknowledged a desire to reopen the Oak View Middle School's competition swimming pool, which closed more than a decade ago after a series of budget cuts. But elected officials want no part in making that happen. "I don't think it's our game, so to speak," city council member Sheri Bukkila said during a workshop meeting about the topic. "If [the school district] can find a way to partner with other entities, that's great. But other than that, I don't want to get financially invested."

â¢ The Crawford Central School District in Meadville, Pa., announced it was discontinuing swimming lessons for every fourth-grader in the district, terminating swimming as part of the high school curriculum and eliminating a significant annual payment to the Meadville Area Recreation Authority, whose facilities include an indoor competition pool. "It's conceivable that in the fall of 2013, we will be looking at whether it's conceivable to have a winter [pool] operation," Roger Gildea, vice chairman of the authority, told The Meadville Tribune. "We're going to need to rely on public outcry - or public support."

Either one would work, as long as it draws attention to the urgent need for learn-to-swim programs, says Thomas Lachocki, chief executive officer of the Colorado Springs, Colo.-based nonprofit National Swimming Pool Foundation, which in October officially launched the ambitious Step Into SwimTM campaign. Initiated to create one million new swimmers - separately targeting kids, minorities and adults - over the next 10 years by encouraging the private and public sectors to sponsor or donate to organizations that teach people to swim, Step Into Swim also seeks to address the misperceptions about the value of water-based activities.

"If I could turn the clock back 50 years and change one thing, I would change pools and spas from being called 'recreational water' to something else," Lachocki says. "I think the issue with so many people not taking ownership of aquatics programs or not directing resources to those programs has to do with ensuring the best use of money. And the word 'recreation' doesn't sound like something that would benefit from the best use of money. When you really look at what an aquatic facility does for a community, it is about recreation - but it's also about a whole lot more. We have to start changing our thinking about the purpose of a community aquatic facility, whether it's run by government funds or private funds. The quicker we can get more people to learn to swim, the more they're going to utilize that facility and help keep its doors open."

The reasons for a program like Step Into Swim - which by the end of 2012 was expected to have generated at least $125,000 in donations and NSPF matching funds - are obvious: afraid of the water. Plus, new research suggests that children who swim are smarter.

By creating more swimmers, according to its proponents, Step Into Swim will help reduce healthcare costs and drowning rates while generating more business for existing aquatics facilities. After all, water exercise might be the only option available to some deconditioned people. As Lachocki says, "At some point, we have to start doing the strategic things that are going to make an impact."

The American Red Cross, Jewish Community Centers of North America, 21st Century Swimming Lessons Inc. and the United States Swim School Association concur. They are the first nonprofit organizations to each receive $10,000 from Step Into Swim to help turn the campaign's promises into reality. Here are highlights of their proposals to do just that, as presented at October's inaugural Step Into Swim Congress in Norfolk, Va.:

â¢ American Red Cross: The Red Cross, which has a network of more than 5,000 authorized providers that offer aquatics programs in the United States and at military bases here and abroad, will seek to reach more children most at risk of drowning because of their location in areas where drowning is highly prevalent. Additionally, a scholarship program guarantees that financial circumstances are not barriers to learning to swim. The Red Cross Learn-to-Swim Scholarship Program is designed to give 6- to 10-year-olds a foundation of water safety and swimming skills while providing participants and their guardians with important water safety information. Plans call for certified American Red Cross water safety instructors to teach a series of small classes that include both in-water instruction (properly entering and exiting the water, floating, the basics of breath control and fundamental swimming strokes) and out-of-water instruction (learning to never swim alone, recognizing a lifeguard and properly wearing a life jacket).

Additionally, parents will receive a newsletter for each Learn-to-Swim level in which their children participate, explaining what their children will be learning and what parents can do to aid the process. Each newsletter also will include water safety information targeting adults.

â¢ Jewish Community Centers of North America: The New York City-based organization's Lenny Krayzelburg JCC Swim Academy has been using the SwimRightÂ© method of teaching, based on six levels of progressive learning techniques, since 2005. Started by its namesake, a four-time Olympic swimming gold medalist, the academy is only active in six JCC locations, and the number of participants in learn-to-swim programs at those locations has doubled (and in some cases tripled) since they began. JCC Association's Step Into Swim proposal calls for more academies to open at JCCs that do not have the financial ability to underwrite start-up costs or create scholarship funds to help lower-income families.

The SwimRight curriculum uses the swim-float-swim technique, in which all students are first taught to instinctually roll onto their backs to breathe, providing them with the ultimate tool for saving themselves should the need arise. Additionally, this approach allows for the proper body positioning for learning all four competitive strokes, and survival skills are taught at all levels.

â¢ 21st Century Swimming Lessons Inc.: The organization that founded the Miracle Swimming Institute in Sarasota, Fla., adheres to the belief that the definition of "learn to swim" is "learning to rely on oneself for one's safety in deep water."

"For the Step Into Swim campaign to be effective, there must be agreement about what it means to learn to swim," states the organization's proposal. The Miracle Swimming program puts comfort and control ahead of stroke mechanics, which helps build confidence in the water. One of the conclusions drawn by 21st Century Swimming Lessons is that as more formerly fearful adults learn to swim, more children will also learn to swim, because their parents or guardians will feel safe and comfortable taking them to the pool. Step Into Swim funds will be used to help expand 21st Century Swimming Lessons nationwide, as well as attract and train instructors.

â¢ United States Swim School Association: The @ Home In The Water initiative will provide resources to promote swimming as a lifetime sport that can prolong and even save lives. Resources will include public-service announcements, printed materials and community outreach information that promote swimming for fun and fitness. This program will be coordinated with other initiatives that association members already support, including the USA Swimming Foundation's Make A Splash, the National Drowning Prevention Alliance and the Safer 3 Water Safety Foundation.

How will these efforts and others help improve circumstances in Virginia Beach, Andover and Meadville - not to mention countless other communities around the country? For starters, any aquatic facility already affiliated with one of the four organizations mentioned above stands to gain, according to Lachocki, who also challenges operators of other facilities to not just sit around and hope for a trickle-down effect of whatever outcomes Step Into Swim may bring.

"They shouldn't wait for Step Into Swim to help them," he says, stressing that the factors behind the campaign don't change, regardless of whether a facility is directly impacted by the effort. "The reality is that if you have an aquatic facility, you already are very valuable to your community. Understand how you are valuable, and communicate that value."