Parkour Is Finding a Foothold in United States

Less than two minutes into the opening scene of 2006's "Casino Royale," James Bond is chasing a bad guy through a construction site in Madagascar, racing across beams high above the ground, climbing steel cables and leaping from cranes. 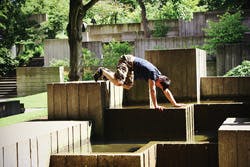 Less than two minutes into the opening scene of 2006's Casino Royale, James Bond is chasing a bad guy through a construction site in Madagascar, racing across beams high above the ground, climbing steel cables and leaping from cranes. The scene not only introduced Daniel Craig as the new 007, it sparked a renewed fascination with parkour, a discipline developed in France during the late '80s (or early '90s, depending on whom you ask).

Also known as free running in the United States, parkour is, most simply put, a way of moving. Explaining any more than that is complicated, even for someone who has spent as much time studying it as Blake Evitt of Parkour Generations Americas. Evitt discovered parkour in college but was unable to practice it due to his other athletic obligations, instead devoting his college career to researching the sport before traveling the world and getting hands-on experience from the founding members. "You'll hear me refer to it as a sport, a discipline and an art form," he says. "I consider it all three."

At the most basic level, parkour is a form of exercise, similar to CrossFit or other functional training programs that aim to utilize as many muscles as possible as participants move from one point to another and navigate all of the obstacles between. "We consider parkour to be the base of fitness and the base of human movement," says Tyson Cecka, executive director of Parkour Visions, a Seattle-based teaching and coaching organization. "When you look at it, it's running, jumping, climbing, moving on all fours, combinations thereof."

The mental aspect of parkour, however, is just as important - the ability to identify potential obstacles and navigate them. For some, it's about skill and efficiency, for others, an artistic expression (categorized by some as a broader discipline called Art du Deplacement). "It's very difficult for someone to get a clear understanding of what it is about without actually trying it," explains Cecka. "If you look up 'parkour,' you're just going to find crazy YouTube videos of guys jumping off buildings. You're not going to get a good sense of how it works."

Trying to imitate such videos would likely land an inexperienced practitioner, or traceur, in either a hospital or a jail cell. For years, organizations like Parkour Visions have been working hard to overcome the perception of parkour created by Hollywood filmmakers and YouTube, reaching out to communities. "We saw it going the way of skateboarding or other extreme sports where all you ever see is the high-level people doing stupid stuff," says Cecka.

The work is paying off, and slowly, cities and communities are not only accepting parkour, they're welcoming it. Parkour Visions has provided instruction to schools, churches, recreation programs, nonprofit groups and private organizations. "We've been running to meet demand," says Cecka. "All our programs have been spawned from people asking us to do events or classes."

Still, there are few outlets in the United States to correctly learn and practice the sport. It has only been in the past five years or so that parkour teaching organizations have been formed and dedicated facilities built. "I searched for places to learn, but couldn't find anything," says Alissa Bratz, one of the founders of the Fitchburg, Wis.-based teaching organization Wisconsin Parkour. "I created a simple web forum that people could access through a Google search and hopefully find each other." Bratz also traveled the country to study with other practitioners of the sport, and slowly, the Wisconsin Parkour group took shape.

"Wisconsin Parkour evolved into a core group of dedicated individuals," Bratz says. Started as a place to share knowledge and techniques with each other, group members quickly realized the need to turn their teaching outward. "We started to see the public perception was impacting how a lot of people were training. We saw a lot of kids just imitating stuff off of YouTube. We realized we needed to be providing this to people, otherwise it could go the wrong way."

The desire to reach out to others has led many individual organizations to establish their own coaching certification. "We have an internal certification for our coaches," says Cecka. "It lasts anywhere from six months to a year or two of apprenticing and running through our manual and resources for coaching development. Parkour is a difficult thing to teach. It's something that we want people to be very good at and very capable in because it sets the future understanding of parkour."

Wisconsin Parkour instructors are certified through ADAPT (Art du Deplacement And Parkour Teaching), an internationally recognized coaching program created by United Kingdom-based Parkour Generations in conjunction with some of the sport's original creators. ADAPT instructors are well-versed in safety and technique, and are required to pass a rigorous physical exam to demonstrate their mastery of movements.

"ADAPT is just coming to the U.S.," says Evitt, who was tabbed by Parkour Generations to lead the East Coast operations of the organization's American division, launched in May of last year. "We started classes in September in the Boston area," he says, noting that the organization's Santa Barbara and Columbus branches had been in existence and teaching prior to joining the organization. "We're teaching in a few different schools, and we teach with the recreation department."

Classes start with the basics, says Evitt, introducing participants to the ideology behind parkour, as well as terminology, history and basic moves. "There's also a significant conditioning aspect," he says, which sets students up to learn more complex moves if they wish to learn. "There's not an emphasis on competition or doing big flips. We don't teach acrobatics in the courses, but we recommend students go to a gymnastics facility to learn those skills."

Classes are limited, in part, by the resources available. Parkour Generations America teaches its indoor classes out of school gyms and recreation centers. Parkour Visions does likewise in Seattle, but also has its own dedicated training facility, which offers climbing walls and ropes, as well as myriad modular pieces that can be rearranged to create different setups. "We have big, heavy, strong boxes that can be moved around and set up in an infinite number of patterns, bars all over the walls, ceiling, multiple stories, scaffolding," Cecka says. "We really want to have every class be different."

Prior to the launch of Parkour Generations America in Boston, Evitt organized a set of trial classes in his hometown of Somerville, Mass., last winter to gauge community interest. "We found a really good response, and within a few weeks classes were full," he says. "People were really curious about what parkour is."

The sport attracts young thrill-seekers - "The people who want to be able to take on anything," says Cecka - and in the Seattle area, Parkour Visions sees a fair number of young professionals from Google and Amazon.

"They all have different reasons," Cecka says. For some, it's just a way to get in 90 minutes of exercise without it becoming boring or routine; for others, it's about discovering their bodies' limits. But there is a certain quality that draws all participants.

"It speaks to our inherent desire to play, to move, to explore," Cecka says. "It's what we do as kids naturally. You can go outside somewhere, and even if you've been there hundreds of times before, you can easily find something new, challenge yourself in a different way just by approaching it from a different angle - forcing yourself to use an off-foot, pretending that the floor is lava." Parkour is, understandably, popular with kids, as well. "We have a huge kids program now," adds Cecka. "Youths themselves are inherently attracted to parkour. Every kid wants to learn to do a back flip or run and jump over things."

Kids between the ages of three and 13 make up approximately half of Parkour Visions' students, and, aside from adjustments to accommodate their smaller size, the techniques being taught remain the same. "We're trying to turn these programs into something that can help develop a lifelong understanding of the sport," explains Cecka. "It's learning how to maneuver safely through obstacles. We have some padded equipment, but it's not like we run our kids through a gymnastics-type setup."

The point is to achieve an awareness of surroundings emphasized in martial arts disciplines, another facet of parkour that adds to its appeal. "You're basically training to overcome obstacles," says Cecka. "You're practicing problem-solving skills, and that very quickly starts applying to your personal life. A lot of people are passionate about parkour because of the confidence it builds, giving them increased capacity to deal with life's challenges."

While parkour originated as a discipline to be practiced outside, drawing on the natural surroundings for inspiration, doing so isn't always feasible in the United States - and not just because of the weather.

"There hasn't been that great of a connection to local parks and recreation departments or city governments because of how litigious the U.S. is," says Cecka. "Everyone is concerned about liability issues. They don't want people using their property for anything that could get anyone hurt."

Parkour Visions made cultivating a relationship with the local parks and recreation departments a top priority early on. "We presented at conferences and we spoke with park leaders to address concerns about where we can and can't train," says Cecka. The organization upholds a "leave no trace" policy when it practices in outdoor areas, and while parks departments are still reluctant to give official permission to hold classes in parks, they haven't raised any objections.

It's a start, says Evitt, but the United States is still light years behind Europe, where cities are not only tolerant of parkour, but encouraging. "In London, we have a really good relationship with the city," he says, "Police will come up and join in the workout."

Moreover, public parkour parks are becoming increasingly common in Europe. Copenhagen alone has five public parks within the city, says Evitt, and last summer LEAP (London Experience of Art du Deplacement and Parkour), the largest outdoor parkour park in the world, opened in London. Part of the disparity, Evitt thinks, is the difference in sense of personal responsibility between Europeans and Americans. "Coming back to the U.S., the degree of personal responsibility is much lower than other countries," he says. "One of my hopes is to get people to take responsibility into their own hands. Everything is on you. There's no pressure to do a technique if you're not comfortable with it."

Until they can cultivate more widespread acceptance, many parkour groups turn to indoor facilities to supplement their classes. "In the U.S., it seems to be the thing to make a gym," says Evitt. "Containing everything within a gym makes things much easier to control."

"The U.S. is still trying to figure out its relationship with parkour," adds Bratz. "Most of the legitimate practitioners in this country and globally are not trying to be rebellious or disruptive. It's a way to make life better, make communities stronger and make people healthier."