William Dement wakes up students who doze in his class (there's at least one every day) by targeting them with a squirt gun, often after classmates in a lecture hall of 300 have pointed the person out. 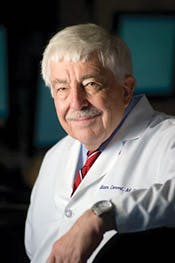 The individual must then stand and shout, "Drowsiness is red alert." It's a mantra for Dement, a Stanford University professor, author of The Promise of Sleep and founder of the school's Sleep Disorders Clinic & Research Center, the world's first sleep laboratory. He actually was instrumental in getting Stanford to eliminate all 8 a.m. classes in an effort to better match students' sleep patterns. Occasionally, Dement's ongoing research has extended into the effects of sleep deprivation on athletic performance. By skill testing some 300 varsity athletes at Stanford, he has found that an athlete's best often comes after sufficient rest. Paul Steinbach asked Dement to look beyond Xs and Os and explain how games might hinge on Zs.

Q: Why has your work on sleep and sports been so limited?
A: We've tried to get some professional teams to do this, but it's not something that's easy to do. People have all kinds of other demands. Students particularly need to study, and then the teams travel, and on and on. If we were able to do a really detailed, massive study, we'd find that if athletes got more sleep they would be less injury prone and, in general, they just simply play better. It seems like people find that hard to believe. "You mean to say that if I take two hours of my waking time away and get more sleep, I'm going to do better?" At least in the studies we've done, that's true.

Q: Do successful, highly driven people tend to think they can get by with less sleep than the average person?
A: I think they definitely tend to think that. That drive, I think, overcomes the sleepiness most of the time when they need to perform, but occasionally these are the people who may fall asleep driving. I've traveled with the Stanford football team a number of times. You get on the airplane and everyone falls asleep immediately.

Q: Is there any advice that you would pass along to coaches?
A: Yeah, let the athletes get more sleep. In the past, coaches were insisting that athletes get up at 5 o'clock. Hell's bells, they go to bed at about 11, and it's ridiculous. Over the years, I've tried to educate coaches, but there is turnover. Here at Stanford, we get a new coach in football at least every 10 years. I think that the women's basketball coach, Tara VanDerveer, who's one of the top coaches in the United States, takes this a little more seriously.

Q: Coaches are going to take advantage of every minute they're allowed to be in front of their teams, aren't they?
A: And they also have a belief that the excitement of the game compensates for any sleep-loss fatigue, and that's simply not true. It certainly compensates some. Sitting in a dull class, you're more likely to fall asleep than if you're out on a basketball court. But there's still an effect.

Q: How much of a performance difference does more sleep actually make?
A: You're starting out with a group of people who are very good to begin with. What should a basketball player be shooting out of a trial of 10 free throws? You might say eight would be pretty good, but if it goes to nine, then that's really good. That one free throw can mean the difference between winning a game and losing it.