Over the summer, most municipal recreation facility operators allocate the majority of their pool space to two activities: swim lessons and open swim. Mickey Boyle, aquatics supervisor with the Geneva (Ill.) Park District, is no different. In 2013, he had to accommodate 770 families that participated in Geneva's swim lessons program. His flexibility to implement new programs is hindered, as virtually all of the 18,000 square feet of water surface is occupied for swim lessons and open swim starting at 8:30 a.m. Monday through Saturday.

"Over the past few years, I've had multiple recommendations about getting some aquatic aerobics into our facility, but it comes down to space and we just don't have it," Boyle admits. "To do this now, we'd have to either close down features during open swim time or cut back on our open swim program." Boyle's challenges typify the challenges facing aquatics supervisors around the country, as many seek to implement new revenue-generating activities but face numerous obstacles, including a lack of space or time - or both.

Athletic Business recently surveyed aquatics directors in college recreation, municipal recreation, YMCA/nonprofit and private facilities around the country. While the demographic of pool user varied based on facility type, all facilities share multiple similarities, starting with maximizing as much of the day (and night) as possible with programming. 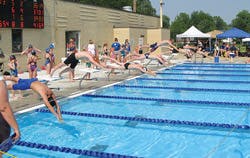 TIME MANAGEMENT Working 9 to 5 doesn't apply to aquatics facilities - at least not to aquatics facilities that want to remain open. Approximately 41 percent of respondents stated that their pool stays open between 9 and 12 hours, while 59 percent responded that their pool is open for 13 hours or longer. For many, being handcuffed by swim lessons, swim teams and/or open swim forces them to use pool space at odd hours to accommodate other activities, such as adult water aerobics.

Todd Roth, aquatics supervisor for both the Welch Swimming Pool and Park Forest Pool in State College, Penn., shared what a typical day at his pools looks like: 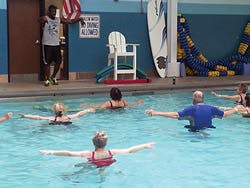 This schedule essentially monopolizes Roth's pool programming from sunrise to sundown, forcing him to schedule his masters swim program - known as "AM Aquafit" - at 6 a.m. The AM Aquafit program offers a variety of water workouts, including adult swim team workouts, self-guided lap swimming and water walking against the channel. Despite being a strong program with solid interest from the community, Roth admits to struggling to get a large turnout because the class is so early in the morning - a dilemma that Jenni Phillips, aquatics supervisor for the City of Cody, Wyo., knows all too well.

"Finding the right time is a challenge," she says. "We have people who say our water aerobics classes are either too early or too late or not on the right day. We modify the class every couple of years to see if we can reach anybody else." Another obstacle for Phillips is the costs involved with participating in programs. "Most of the people for our water aerobics classes are on a fixed budget and cannot afford to pay the cost that we need to charge for our programs." 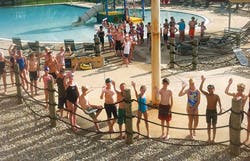 SPECIAL EVENTS Rather than focus on building up specific programs, aquatics directors are investing in one-time activities that will cost less for the user but generate stronger participation for the aquatics facility. "People have so many choices now," says Roth, who has to compete with Penn State University, local YMCAs and other local pools. All of these offer swim lesson options, making the market extremely competitive. And Roth acknowledges that he can't compete against the YMCAs for the adult fitness business, because their programs are year-round. "The market is getting diluted now with so many choices that you need to find a niche or focus on single events rather than programs," he says.

Roth has made such events a priority, implementing dive-in movies and themed family fun nights with games and prizes. The season concludes with doggie swim, the one day Roth opens the pool to owners and their pooches.

"Across our industry, not just in aquatics, the additional programming for us has not been as successful as one-time events," he says. "People aren't throwing out $500 to $800 for registration, but they will spend $30 to go to the pool some night."

Jim Lemke, aquatics director for Columbus (Ind.) Parks and Recreation, has been hosting a dog swim for the past nine years. On the last day of summer, he charges $5 per dog, opening up the diving and lap pools, which attracted 144 dogs during this year's event. But his programming emphasis isn't on four-legged creatures; it's on the two-legged kind that can swim, pedal and run. 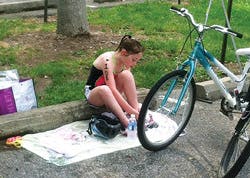 NEW PROGRAMMING Lemke acknowledges that one of the fastest growing programs at his facility is youth triathlons. The nine-and-under kids swim 100 meters, participate in a three-mile bike ride and run half a mile. The 10-and-up kids do a 200-meter swim, six-mile bike ride and one-mile run. Kids as old as 14 can participate, while his youngest participant this year was a 5-year-old girl. His facility hosts two triathlons in June and August, with this year's June event drawing 75 kids. Between the 2013 events, Lemke introduced special 45-minute training sessions, with the bulk of that time spent in the pool. "There is definitely a growing interest in this, and not just in Columbus," Lemke says.

In Myrtle Beach, S.C., youth triathlons have been a big part of aquatics supervisor Kathy Anderson's programming for five years running, with participation increasing from 80 to 140 kids over that span. Anderson would like to see similar growth with Aqua Zumba® (she's currently searching for a certified instructor), with past success often contingent on whether the class is offered as part of a package or sold separately. "People like it when it's included in Choose to Lose and included in their membership," Anderson says. "We can get up to 30 people for Aqua Zumba, but once the Choose to Lose program ends, classes can go down to seven or eight people."

Aqua Zumba is so new, Anderson contends, that it hasn't had a chance to build up the loyal fan base that many other popular programs have year after year. "It'll take awhile for it to grow, and I'm not sure if it's a fad or if it's going to stay around," she says. "A lot of the movements aren't honestly geared toward the water and some of the instructors that I've seen are not as comfortable teaching in the water." 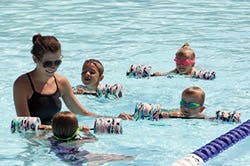 IDEA EXPANSION Boyle is enthusiastic for the future of his aquatics facility, which is scheduled for an expansion in the next five years. "Our park district recognizes that we need more space and understands that we are locked to some of the programming that we offer, but we do have goals in the near future, and that's increasing programming once that facility space becomes available," he says. Based on budget, this could include another lap pool, dive well and a river that would be used as an aquatic walking track in the mornings. Amenities such as aquatic climbing walls could also be in the plans.

But these options don't apply for most aquatic directors. Instead, they must look for new programming to maximize existing pool space and increase revenue as budgets get tighter and tighter. "As aquatic directors," Lemke says, "we have to be creative."