Loyola (Ill.) University held a ribbon-cutting ceremony for the Alfie Norville Practice Facility on Sunday. An $18.5 million project, “The Alfie” is the practice facility for the school’s basketball and volleyball programs, and includes two basketball courts, four volleyball courts, an exercise science lab and a film room. — Loyola Phoenix

It was a special afternoon on campus as we officially opened The Alfie Norville Practice Facility today! We are forever indebted to the Norville family for their generosity! #OnwardLU pic.twitter.com/NBJM525ByY

Arkansas State University opened a $29 million football facility this week. The space includes coaches offices, a player lounge, meeting rooms, a weight room and a new locker room — which was revealed to players in a video posted on social media. — Footballscoop.com

We were so proud to welcome alumni, donors, fans, coaches, staff, and student-athletes to the grand opening of the Student-Athlete Performance Center last night

Take a look at some of the best #FramesOfTheDay#EMUEagles pic.twitter.com/PrPUyb2TJh

Auburn University this week unveiled a new locker room for its women’s basketball team, part of a $3 million, 6,700-square-foot renovation plan for Auburn Arena. The women’s upgrades came first, but upgrades to the men’s locker room are planned as well. The entire project is expected to be completed prior to the start of the basketball season. — The Auburn Plainsman

Broke in our updated locker room the only way we know how: dancing.

S/O to all those involved in this upgrade! We are in love #WarEagle | #TeamofExcellence pic.twitter.com/ylWw6EqFc0

The University of Buffalo, fresh off of opening its $18 million Murchie Family Fieldhouse, announced that it hopes to break ground on a new $5 million strength and conditioning center within the next year. The facility would serve student-athletes in several of the school’s Olympic sports, and will at least double the size of the 6,000-square-foot Morris Sports Performance Center. — Buffalo Business Journal

The University of Texas will unveil the largest collegiate Hall of Fame this afternoon at Darrel K Royal - Texas Memorial Stadium. The 24,713-square-foot facility will feature a halo display celebrating the success of the school’s athletic teams from all sports. In addition, a 1,400-square-foot space will house a 16-by-9-foot video display highlighting team victories. An 8-foot-tall, 1,200-pound longhorn statue dedicated to the Longhorn mascot Bevo will greet visitors. — Press release

Here is a sneak peek of The Frank Denius Family University of Texas Athletics Hall of Fame, opening next week! 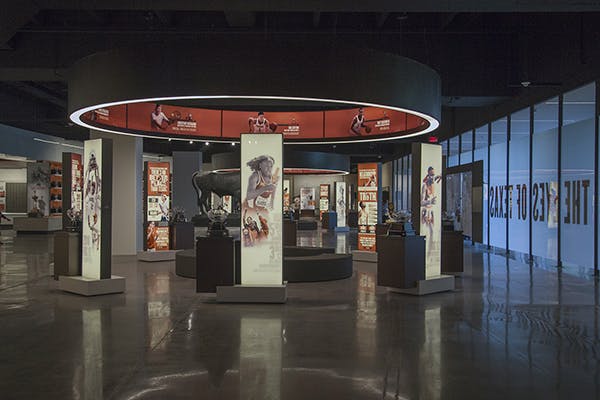 Sacred Heart University held a ribbon-cutting ceremony for its Bobby Valentine Health and Recreation Center on Tuesday. The $21.8 million facility will serve the entire student population, and features amenities such as an indoor track, a bowling center, an 18-bike cycling center, a 45-foot climbing wall and a weight training room. Designed by S/L/A/M Collaborative, the 57,400-square-foot facility features two stories of exercise and recreation space and a third-level juice bar. — sacredheartpioneers.com

The city of Rochelle, Ill., held a groundbreaking ceremony for a $14 million recreation center scheduled to open by Labor Day in 2020. Plans call for a 91,000-square-foot facility with a basketball and volleyball court, two multipurpose rooms, classrooms, a swimming pool, a playground, outdoor patio areas and a 24-hour fitness facility. — WIFR.com

The University of California, Berkeley showed off its newly renovated football locker room. Funded by and named for NFL quarterback Aaron Rodgers, the facility was revealed to the team in a video posted on social media.