Texas A&M University is celebrating the grand opening of the Anne S. Henry and Henry B. “Hank” Paup '70 Pavilion, or Paup Pavilion, on Friday. The $7.8 million renovation and expansion project was designed by Populous. It will serve the men’s and women’s swimming and diving programs, and feature one of the top dryland diving facilities in the country. Amenities include five different springboards, a large in-ground foam pit, an in-ground trampoline, a gymnastics spring floor, instant replay cameras, new team locker rooms, a team lounge area, an athletic training room, hydrotherapy pools and coaches’ offices. — Press Release 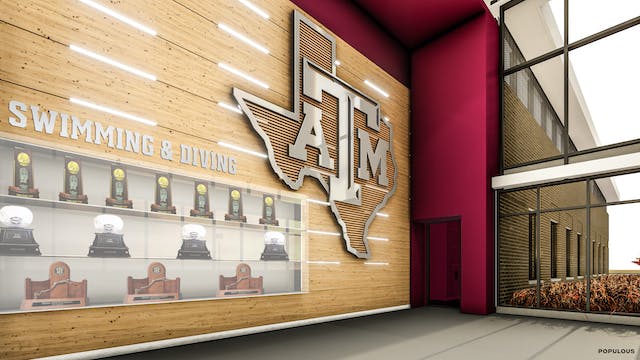 San Jose State University announced that construction had begun on Phase I of its Spartan Baseball Practice Facility. The two-phase project will begin with the construction of a practice field, which will give the team a place to train while continuing to play games at Excite Ballpark, which the Spartans share with the San Jose Giants. The second phase of the project will see the construction of a stadium around the existing practice field. — SJSUSpartans.com

Martin Luther College announced that construction on its Betty Kohn Fieldhouse will begin in April. The building will feature a 50 by 70 yard turf field that will be used as indoor practice space for several sports, and add team locker rooms for soccer and baseball, two golf simulators, hitting tunnels for baseball and softball, equipment storage space and officials’ locker rooms. — MLCKnights.com

Construction will begin in April, and is expected to be ready for student use in January of 2022!

Check out all the details about the complex...https://t.co/4g6ggOTn0y

Vanderbilt University is in the midst of renovating its football locker room. A tweet posted by athletic director Candice Storey Lee showed that demolition of the existing locker room had begun. — SaturdayDownSouth.com

How it started How it's going