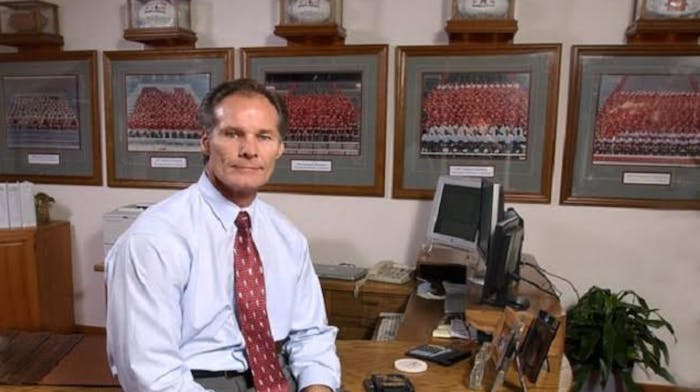 My first weightlifting experience was in one of my buddy’s garages when I was ten years old. During high school and college, I began to understand how specific lifts helped athletes perform better. I had no idea my experience lifting would impact strength training at Nebraska or the rest of the country. Now, the Husker Power program I helped build celebrated 50 years in 2019 with 28 National Championships and 250 Conference Championships.

When I retired from my position as the associate athletic director with the University of Nebraska in June 2020, I knew I wanted to seek out other professional endeavors within the industry. Shortly after, I began consulting with companies like Matrix, so I could continue impacting athletes through programming and equipment that builds strength and power.

Throughout my 35 years as the Huskers' head strength coach, I learned that there are three essential components at the core of a successful training program: the facilities used to train, the lifting and conditioning program, and the supervision provided by the certified strength and conditioning coach. To break it down, all lifting programs are dependent on, and limited by, the features of the available facilities. When athletes have access to purposeful equipment, the responsibility lands on strength coaches to teach athletes proper technique and get the job done right with safe programming. The combination of these three key components will affect any high school or collegiate strength training program in immeasurable ways.

Having the right equipment to train your athletes is crucial, but the importance of a high-quality facility spans more than just the application. Early in my career, I learned that improving our facilities impacted recruiting. Upgrades were easy for a recruit to see. Keeping the room freshly painted with good lighting, airflow and equipment makes a good impression on both the athletes and their parents. Aesthetics and even location of facilities can be a huge factor in a recruit’s assessment of the campus, as they might not get a full visual of the school’s lifting program or coaching during recruitment events. In the weight room at Nebraska, I put a huge sign up on the wall that said:

Husker Power – Where the Best Come to Get Better

This branded our program as the next step to getting better and planted that thought in their minds. We also demonstrated the exercises they needed to focus on and the technique they needed to use, which set the stage for the programming they would encounter if they were to enroll.

Creating an effective training program for athletes requires attention to sport-specific skills and a progressive and methodical approach for a balance of stimuli and needed recovery. Drills and exercises must be combined systematically to improve the strength, conditioning, speed and agility necessary to play at a championship level. For the best results, coaches should organize their workouts in a fashion that will peak athletes as they go into the season.

Once coaches establish the foundation of the program and training begins, their role expands to become a motivator for athletic development. The program is dependent upon the athletes having the desire to work hard, apply themselves and improve their performance. Attendance alone is not enough.

In 1991, the Huskers were having a problem getting players to do the lifting program. Absences during season skyrocketed, and I knew we needed a change. During an off-season meeting, I held up a paperweight that looked like a giant championship ring and told them I was prepared to win a national championship ring, but to do so, we needed to make a change in attitude and attendance. I needed them to go from being “Have-to” athletes to being “Want-to” athletes that were there to do everything they could to help the team win. The athletes ready to participate were handed a red jersey and were asked to wear them as they trained to show their commitment to the program. As we neared the end of the six-week program, I met with the team to explain the progress I expected to see when we compared the testing records from the beginning of the program to the end. We were normally seeing 15 to 18 new records during performance testing each winter, but I could see so much improvement already that I expected they would break 50. They broke 78 records and gained over 5 lbs. of lean body mass (muscle), and we got back a football team. The freshmen in that room kept the training intensity going and we won three National Championships in the next six years and they got championship rings to go along with the two we had won previously.

A part of good coaching is the ability to assess the strengths and weaknesses of the athletes by testing and evaluating known performance indicators. Then, coaches must motivate their athletes to set high goals based on their results and encourage them to work hard and achieve those goals. At the end of the 1994 Orange Bowl, Nebraska had taken the lead with 1:16 left on the clock — but let a National Championship slip away as Florida State won its first national title by kicking a field goal. That summer, I asked an assistant to put 1:16 seconds on the scoreboard in the Nebraska stadium every day along with the words Unfinished Business. I asked the players to do 1 minute and 16 seconds of additional conditioning each day as a reminder that 1:16 was on the clock in the Orange Bowl against Florida State when we let them get back into the game. Because of this reminder, our players developed a will power in the fourth quarter of each game during the 1994 unbeaten season. They were determined not to lose and had prepared to rally. The extra work we did that summer wasn’t much, but it prepared the team to stay energized through the final seconds on the clock. In the fourth quarter of the following year’s Orange Bowl game against Miami, fatigue had set in for their team in the fourth quarter. They were ahead 17-10 but allowed Nebraska to score two touchdowns on fullback runs up the middle. Our defense stopped Miami seven series in a row to end the game and won 24-17. That was the best example of conditioning affecting a game that I have ever seen in a college or pro game.

When the coaching complements the program in a well-equipped facility, athletes will have all the tools they need to excel. And Matrix understands that.

Before I visited one of Matrix’s five factories, I did not realize the reach they had in the athletic training field. During my search for consulting opportunities post-retirement, I researched a variety of potential partners known to cater towards athletics. When I vetted Matrix, I was pleasantly surprised by their extensive strength training portfolio and I had to see it for myself.

When I chose Matrix as my equipment partner, I knew I had made the right decision. They understand the importance of applying the three key factors of an effective strength program, and their sales team dedicated to athletics is extremely experienced and knowledgeable about the day-to-day of being a strength coach.

If you want to learn more about what they are doing in the world of athletic performance, visit www.TeamUpWithMatrix.com.