An athlete lifting weights assumes the risk of injury even if he's hurt in a mandatory weightlifting class. 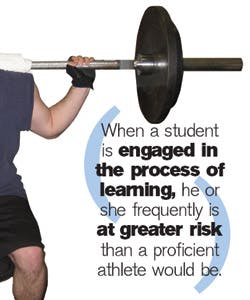 When student-athletes participate in potentially dangerous activities, what is the legal obligation of the teacher or coach? Does their duty of care change if the activity occurs during regular school hours in a class, as opposed to after the school day has ended? These were just two of the questions the California Appeals Court was asked to answer in Baltierra v. Corona-Norco United School District [2006 Cal. App. LEXIS 4007].

Mike Baltierra was a 14-year-old freshman on the Corona High School football team. To be eligible to play, each member of the team was required to take a weightlifting class during the academic school year taught by John Brandom, who was also the school's football coach. One day during class, while attempting to perform a one-repetition-maximum squat lift, Baltierra sustained serious back injuries - a herniation and extrusion of the L4-L5 disc.

Just before the injury occurred, Brandom had already watched Baltierra successfully complete squats of 315 and 325 pounds. When Baltierra decided to add another 10 pounds of weight to go for a personal best of 335 pounds, Brandom believed the weight was reasonable based on Baltierra's prior performance.

As a result of his injury, Baltierra sued both the Corona-Norco Unified School District and John Brandom, alleging Brandom's negligence and negligent supervision, and charging that the district was negligent in hiring, training, supervising and retaining unfit employees. In essence, the complaint alleged that Brandom breached his duty of care to Baltierra by negligently and carelessly instructing and encouraging him to engage in a dangerous weightlifting practice known as "maxing out."

Brandom and the school district denied the allegations and moved for summary judgment based on the doctrine of primary assumption of risk: Since Baltierra voluntarily and knowingly exposed himself to the dangers of weightlifting, he assumed all the risks inherent in the activity. In opposing the motion for summary judgment, Baltierra argued that the assumption of risk doctrine should not apply since the weightlifting class was mandatory.

In granting the motion for summary judgment, the trial court held that regardless of whether the class was mandatory, it was undisputed that Baltierra alone decided how much weight to attempt. When Baltierra decided to attempt to lift 335 pounds, he was voluntarily assuming the risk that the weight might be too heavy for him and that he might get hurt. Such a risk of injury, the court held, was inherent in the sport of weightlifting.

Baltierra appealed the trial court's decision to the California Appeals Court. In reviewing the decision, the Appeals Court noted that as a general rule, participation in sports is governed by primary assumption of risk. As such, the school district and the coach did not owe Baltierra a duty of care to protect him against weightlifting's inherent risks. However, the court ruled that the school district and Brandom did owe Baltierra a duty not to increase the risks of the activity beyond those risks inherent in the sport. Therefore, in order to overcome the doctrine of assumption of risk, Baltierra was required to show that the school district or Brandom, by requiring students to perform one-repetition max lifts, increased the risks of weightlifting beyond those risks that are normally inherent in the activity.

Baltierra, however, argued that the primary assumption of risk doctrine should not apply in the classroom setting. As long as a class is taught during regular school hours on school grounds, Baltierra argued, the school district and coach owed him a greater duty of care than if the class were an extracurricular activity occurring outside of school hours. Baltierra claimed that by virtue of their relationship as public school teacher and public school student, the school district and coach owed him direct and very broad legal duties of care during a state-mandated physical education class.

In rejecting this argument, the Appeals Court held that the only duty owed by the school and teachers with respect to inherently dangerous activities is to avoid increasing the risk beyond what is inherent in the activity. School districts and their employees, the court noted, have never been considered insurers of the physical safety of students; the only duty California law imposes on school authorities is the duty to supervise the conduct of children on school grounds at all times and to enforce the rules and regulations necessary to ensure their protection. Therefore, the court ruled, the school district and its employees owed students in regular classes taught during school hours the same duty of care it owed students in extracurricular activities on school grounds.

Since the primary assumption of risk doctrine is applicable in regularly scheduled in-curriculum physical education classes, the court next examined whether Brandom, by requiring students to perform a max lift, increased the risks inherent in a high school weightlifting program.

The court first determined that one-repetition max lifts are an integral part of any football weightlifting program. In addition, the court found that one-repetition max lifts teach and enable the player to deliver and absorb maximum efforts. The question was, did Brandom fail to properly prepare and teach Baltierra to do max lifts? In finding for Brandom, the court determined that he properly prepared Baltierra by involving him in multiple-repetition weightlifting to strengthen his body and give him practice in performing the motion required to do the lift. In addition, the court found that Brandom not only had Baltierra observe other players properly perform lifts before being allowed to attempt one, he also had observed Baltierra correctly perform single-repetition lifts of 315 and 325 pounds. Finally, the Appeals Court noted that Baltierra was permitted to perform the maximum lift with only an additional 10 pounds of weight, an increase of just three percent.

The California Appeals Court decision reinforces the public-policy belief that coaches, almost by definition, must be able to challenge student-athletes to perform beyond their current capacity. As the court noted, when a student is engaged in the process of learning, he or she frequently is at greater risk than a proficient athlete would be. It is therefore essential, the court held, that the courts do not impose upon coaches a duty to eliminate all the risks presented by inexperience. To impose such a duty, the Appeals Court held, would either alter the nature of an active sport or chill vigorous participation in the activity.

Attorney John T. Wolohan (jwolohan@ithaca.edu) is an associate professor of sports law and chair of the Department of Sport Management & Media at Ithaca College, where Megan Olenowski is a senior sport management major.
Sign Up for AB Today!
Get industry news, insights, and new product information delivered straight to your inbox.
Read Next