Speculation remains about Canada's security budget for the 2010 Olympic Games. 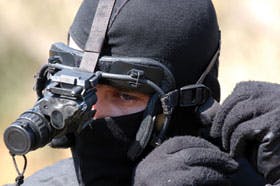 In an era in which Olympics security costs can run into the billions, it is worth pondering whether the money spent outweighs the risk. No, really. Athens 2004 organizers and Greek authorities spent a well-publicized $1.5 billion USD - or, $142,857 per athlete or $283 per ticket sold - for a security plan designed in equal parts to reassure a nervous post-9/11 public and to scare off terrorists ("Money has this incalculable deterrent value," Bruce Hoffman, of the RAND Center for Middle East Public Policy, told The Wall Street Journal at the time). Beijing 2008 organizers and the Chinese government, on the other hand, spent about $300 million - 20 percent of the Athens security budget. Both events went off without a hitch - perhaps a testament to the money spent, perhaps not.

Prepare to be staggered by the intelligence-report equivalent of a pipe bomb.

Officials in polite, friendly Canada are remaining mum on the bill for securing Vancouver 2010, although critics of organizing committee VANOC say the amount spent could well soar as high as $1 billion. Even more surprising are the contents of a July 2008 government intelligence assessment that was obtained in October by several Canadian newspapers under the country's Access to Information Act. The report lists four potential terrorism scenarios, and gives an inordinate amount of space to the "lone wolf" type of attacker that, as Peter St. John, who teaches intelligence, insurgency and terrorism at the University of Manitoba, told the National Post, "Olympics after Olympics have attracted."

But the report can only claim one such attack - the pipe bomb that ripped through a crowd at Centennial Park in Atlanta in 1996, killing two people and injuring more than 100. The other lone-wolf attacks noted include the 2006 shootings at Dawson College in Montreal, the 1995 Oklahoma City bombing and the 1985 assault on the Quebec National Assembly, none of which had an Olympics connection. Indeed, even the Centennial Park incident fails to meet the report's threshold for an act of political violence, given that the explosion occurred outside the official Olympic-secured perimeter and was not claimed by anyone eager to make any kind of political statement. In fact, the perpetrator, Eric Rudolph, went immediately into hiding and only said, after being apprehended months after the Games had finished, that he was angry at the United States government for sanctioning "abortion on demand." Munich 1972 it was not.

Only the first of the other three terrorism scenarios - "al-Qaeda," "al-Qaeda-inspired terrorists" and "domestic non-Islamist extremist groups" - names a specific domestic or international group on the watch list, and portions of the document provided to the papers were redacted on the grounds that they related to "efforts of Canada towards detecting, preventing or suppressing subversive or hostile activities." The report's conclusion that "extremist elements have publicly stated their intent to continue acts of protest and possible violence against both the Olympics and commercial symbols they perceive to represent the 2010 Winter Games" led would-be extremist Chris Shaw - a longtime critic of globalization in general and the Games in particular, and a spokesman for 2010 Watch - to claim that "misguided" security agencies are hyping the threat of terrorism.

"To look at us as security threats," Shaw told The Vancouver Sun, "is to ignore the real threats."