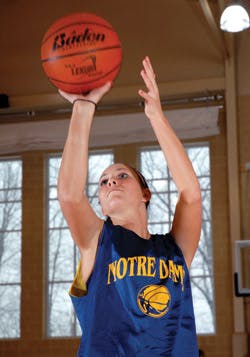 OH, SHOOT Devon Kane suffered her second ACL tear in three years during a game in February.
Devon Kane, senior guard for the all-girls Academy of Notre Dame de Namur in Villanova, Pa., drove to the left and pivoted to pass during a basketball game against conference rival Germantown Academy in February. That's when she felt a pop in her left knee and collapsed on the court. The injury, Kane's second anterior cruciate ligament tear in three years, will keep her sidelined for the remainder of her prep-sports career. "I can't do anything about it," she told The Bulletin of Philadelphia before undergoing surgery and potentially facing several months of rehabilitation. "I'm just keeping my head up."

That's about all she can do. Young female athletes are up to eight times more likely than young male athletes to injure their ACLs. According to the U.S. Centers for Disease Control and Prevention, more than 46,000 girls and women under the age of 19 suffered an ACL sprain or tear in 2006, and almost 30,000 required surgery - which often keeps patients out of action for six months or longer.

But new research shows that student-athletes recovering from ACL-reconstruction surgery, regardless of gender, can safely return to competition quicker than traditionally thought. Doctors at the Shelbourne Knee Center at Methodist Hospital in Indianapolis claim their latest study supports an ACL-injury recovery time of as little as four months. Presented in late February at the annual American Academy of Orthopaedic Surgeons meeting in Las Vegas and thought to be the first of its kind to specifically address teenage athletes, the research challenges the widely accepted waiting period of at least six months.

Headed by orthopaedic/arthroscopic surgeon and sports medicine specialist K. Donald Shelbourne, the study focused on more than 400 male and female athletes who were 17 years old or younger at the time they tore their ACLs while competing in basketball or soccer - sports that require the sudden pivoting or stopping conducive to ACL injuries. Shelbourne and his associates tracked the patients' progress as they went through a rehabilitation program before and after reconstructive surgery. They found that 40 percent of injured patients were able to start playing again in less than four months, while 35 percent returned to the court or field in four to six months. Only a quarter of all patients in the study took longer than six months to rebound. And so far, Shelbourne reports, those athletes who returned to competition earlier rather than later did not have a higher incidence of reinjuring their ACLs than those whose recoveries took longer.

"But what about when those kids are 40 years old? That's the big question," says Marjorie Albohm, president of the National Athletic Trainers Association. "In orthopaedics, long-term follow-up really is the bottom-line solution to finding out if surgery works over time and what may be happening to the joint."

Indeed, Albohm says ACL injuries have become part of a much broader sports-medicine discussion in recent years, as doctors explore the link between ACL injuries in young people with osteoarthritis of the knee as they age. That condition is among the five leading causes of disability in older men and women, according to the AAOS, and the risk for disability from osteoarthritis of the knee is as great as that from cardiovascular disease. Experts theorize that the bone bruising caused by an ACL injury damages cells of the articular cartilage (a smooth and slippery fibrous connective tissue that lines the knee joint), which can lead to bone spurs and fluid in the knee.

"It's a very interesting study," Albohm says of Shelbourne's findings. "I think the results are true in the hands of a very accomplished surgeon like Dr. Shelbourne, who has focused on ACL surgery his entire career. But so much depends on the surgeon and the actual surgical technique used. Every case is different; every rehabilitation is individual. You can't take that study, and those results, and duplicate them across the country."

But you - and your high school's student-athletes - can take steps to prevent ACL injuries in the first place, which is the goal of a new public awareness campaign. Launched by AAOS and NATA (coincidentally, a week after Shelbourne revealed his research findings), the effort targets young female athletes and is designed to help certified athletic trainers educate athletes, coaches, parents and other healthcare professionals. It also includes a full-page public-service announcement for mainstream magazines and newspapers featuring a "Most Vulnerable Player" trophy with a female soccer player on crutches. The copy reads: "Too many female athletes are getting put on the shelf."

"While there is no single exercise that can prevent ACL injuries, the chances of such an injury happening can be lowered by performing training drills that emphasize power and agility and by improving muscular reactions with jumping and balance drills," says Letha "Etta" Griffin, AAOS spokesperson and an orthopaedic surgeon specializing in sports medicine at Peachtree Orthopaedic Clinic in Atlanta. "This is especially true for female athletes."

Many theories have attempted to explain why girls are more susceptible to ACL tears than boys, including differences in hormonal balances, biomechanics and pelvic width (which affects the angle of the knee joint). "There are volumes of research trying to answer the question of why, and there is not one single answer," Albohm says. "That's why we need this campaign."

When ACL injuries do occur, despite the best preventive efforts, the question of how fast a young person should return to competition after undergoing ACL surgery and rehabilitation ultimately is a philosophical one. Certified athletic trainers at high schools and colleges have always focused on aggressive rehab for a quick return, but Shelbourne and his colleagues suggest that ACL patients need not be further constrained by presupposed timelines.

"If an athlete is physically ready and has met the rehabilitation guidelines, could he or she return at five months and 29 days?" asks Tinker Gray, research director at the Shelbourne Knee Center. "What about five months and five days? Some athletes are able to progress through their rehabilitation program quickly and are able to maintain full knee range of motion, control their swelling and have a return of their strength by three to four months. Our data show that if they meet the rehab requirements, there is no reason to restrain them from returning to sports."

Of course, fewer young athletes might be out of action in the first place with proper preventive care. "We're hopeful that by shedding more light on this topic," Albohm says, "athletes and those who work closely with them on the playing field will take the necessary steps to reduce or eliminate these types of injuries."