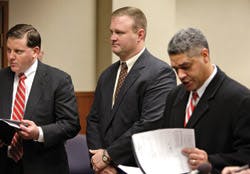 Last summer's heat-related death of Max Gilpin, a Louisville, Ky., high school football player who collapsed at practice under the supervision of a first-year coach, spurred state lawmakers to take swift action. They drafted and passed far-reaching legislation that, among other things, requires all prep coaches (regardless of sport) to complete a new 10-hour sports-safety course. Gov. Steve Beshear added his signature to the bill in March, and coaches and administrators throughout the state have been scrambling to comply before fall practices begin.

Specifically, thousands of state coaches must now pass a test after completing a training course on medical and other safety issues taught by a state-licensed certified athletic trainer, physician, nurse or physician's assistant. Topics will likely include, but are not limited to, emergency planning and recognition; heat- and cold-related illnesses; head, neck and facial injuries; and first aid. Additionally, the presence of at least one person who has completed the course will be required at every high school game and practice.

"State legislatures, more and more, are getting involved in coaches' education at some level. But it's usually when there's a crisis, like the one in Kentucky, when somebody dies," says Tim Flannery, the assistant director of the National Federation of State High School Associations who is in charge of coaches' education. "I hate to say it, but it's an overreaction of sorts, because the fact of the matter is that states have been training coaches for years. And then all of a sudden, a state legislature gets involved, as if we're not doing anything right. There are a lot of things that are being done right."

Although the National Federation doesn't mandate coaches' education, at least 43 states (either by decree of the legislature, the department of education or the athletics and activities association) use online courses offered by the NFHS, including "Fundamentals of Coaching," "Engaging Effectively With Parents" and "First Aid for Coaches." The latter (a three- to four-hour course) is a training program developed by the American Red Cross of Greater Indianapolis and supported by the U.S. Olympic Committee.

KHSAA commissioner Brigid DeVries, however, has indicated to local reporters that the association, in conjunction with the Kentucky Medical Association, is developing its own online course. She acknowledged that the Web-based delivery method is not ideal, but that "it is the only option we have right now. Our immediate goal is to get one person at every practice" to take and pass the course by July. "And that," she added, "is going to be tough to do."

Flannery agrees that Kentucky's timeline is tight, but he suggests other states consider additional training that is already available through either the NFHS or the American Sport Education Program. "People don't have to be reinventing the wheel," he says. "We all have the same issues, and there is no doubt that coaches should be held to a standard, but we've established that standard for them."

That standard might soon be heightened. Flannery plans to ask all of the federation's member state associations this summer to consider pushing for their coaches to complete safety and other training courses prior to - not after - picking up their clipboards and whistles for the first time. As an example of the potentially dire consequences of negligence in this area, he points to David Jason Stinson, Gilpin's rookie coach at Pleasure Ridge Park High School, who has pleaded not guilty to a criminal charge of reckless homicide for making the 6-foot-2, 220-pound sophomore run sprints with his teammates in 94-degree heat last August. While it is unclear if Stinson had taken any coaches' education courses prior to that day, Flannery thinks requiring early training for all new coaches could prevent similar tragedies. "If coaches have the training, the likelihood of them making better decisions increases," he says.

Kentucky's legislation, introduced by Democratic Rep. Joni Jenkins, originally would have required coaches to bring pools of ice to each hot-weather practice and competition. But the National Athletic Trainers Association and other medical groups balked at the idea, warning against putting too much pressure on coaches to know when an athlete would require an ice bath. "A course in prevention will make coaches aware of some of the dangers," says Marjorie Albohm, NATA's president. "Such a course, however is not going to prepare a coach for an emergency situation. When a student-athlete goes down with a serious medical condition, it is the athletic trainer who is educated to serve as the first responder. The bill may give a false sense of security to athletes and their parents - and probably to coaches and school officials, as well."

Only 42 percent of all high schools have access to certified athletic trainers, according to the NATA, and while Kentucky schools are not required to have them on site or on staff, the KHSAA strongly encourages them to do so.

While the education requirements for coaches have received all of the attention, Kentucky's new legislation also calls for the state association and the Department of Education to complete a sports safety study later this year. It is likely to include sports-injury data compiled by sport and will examine data-reporting requirements. The expectation is that the study will lead to greater oversight of student-athlete injuries.

Meanwhile, the law may be refined in 2010, the course requirements must be reviewed every 30 months, and there's been little discussion so far of the costs involved with compliance. But many administrators seem keen on the new rules. "I don't think it will be a hardship," Tony Sosby, athletic director at Lexington's Bourbon County High School, told that city's Herald-Leader. "If it's for the safety of the kids, I'm all for it."

"States recognize that safety and minimizing risk are the single most important things we can do - above Xs and Os, mission and purpose and everything else," Flannery says, pointing to recent strides in AED-certification among coaches in a growing number of states. "The best way to do that is to train our coaches."