As energy drink consumption amps up among student-athletes, administrators are pointing out the potential dangers. 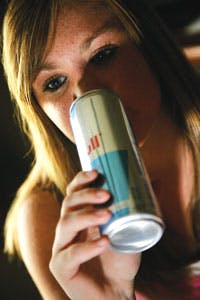 Photo of a girl consuming an energy drink

More than five years ago, two student-athletes from Fairfax County (Va.) Public Schools were transported to the hospital with symptoms of tachycardia - an abnormally high heart rate. "The symptoms resembled issues related to substance abuse, and we didn't know what was going on," says Jon Almquist, administrator of the district's athletic training program. They found out soon enough: Doctors ascribed the symptoms to energy drinks - beverages with high amounts of caffeine and carbohydrates designed to relieve fatigue and enhance performance - which both kids had consumed prior to practice.

"When you're putting a stimulant into your body that is specifically designed to increase cardiac output during a time when you're increasing cardiac output simply by participating, it ends up being a pretty nasty mix," Almquist says. That's why, shortly after these and similar incidents occurred at district schools, Fairfax County banned energy drink consumption among the more than 23,000 student-athletes at 25 high schools.

In September, the Virginia High School League's Sports Medicine Advisory Committee recommended that all of its member schools do the same thing. An extensive education campaign informing student-athletes, coaches and administrators about the differences between energy drinks such as Red Bull, Rockstar, Amp and Monster, and sports drinks such as Gatorade and Powerade, would accompany the ban. A student-athlete caught consuming an energy drink would be asked to dispose of it, and staff members would be discouraged from drinking them around students and from permitting vendors to provide free samples. A final decision on the committee's recommendation is pending approval by the league's executive committee. If an energy drink ban is enacted, the VHSL would be the first state association to take such action, according to the National Federation of State High School Associations, which in 2008 issued a position statement warning that energy drinks should not be used for hydration purposes and that there is no regulatory control over the beverages.

Tom Dolan, the assistant director at the VHSL who oversees the league's Sports Medicine Advisory Committee, rates energy drinks "pretty darn close" to concussions in terms of priority. "It involves student-athlete safety," he says. "Going into this discussion, I wasn't aware of the widespread usage of energy drinks. There's probably even more prevalence of use than we know. But we can't assume people are more knowledgeable about energy drinks than they are."

"Anytime a kid has a situation that necessitates EMS services, and it turns out it's because he had two energy drinks, that's reason enough for us to be concerned," Almquist adds. "We shouldn't encourage that situation. If we didn't prevent it, we would be condoning it."

Sports drinks provide rehydration during athletic activity and contain a six to eight percent carbohydrate solution and a mixture of electrolytes to allow maximum absorption of fluid by the gastrointestinal tract. Energy drinks, on the other hand, typically contain a higher carbohydrate concentration (usually nine or 10 percent), which not only makes them more caloric but also impedes fluid absorption and may lead to abdominal cramping. Caffeine concentrations may range from the equivalent of an eight-ounce cup of coffee to twice that much, according to the National Federation's Sports Medicine Advisory Committee, which issued the organization's position statement. Other common ingredients include herbs and supplements that combine with the caffeine to create a "synergistic effect" that varies from drink to drink, Almquist says.

The NFHS states that high doses of caffeine might produce lightheadedness, tremors and difficulty with fine-motor-control skills. It also acts as a diuretic, resulting in greater fluid loss. In Fairfax County, Lake Braddock High School football coach Jim Poythress saw players deal with cottonmouth after only one or two drinks, as reported by Rivals.com, a college and high school sports website.

While some energy drinks specify on the can that they are not intended for "children," others warn they also should not be used for hydration purposes. The makers of Red Bull - a high-profile brand in the sports world that sponsors athletes, teams and even venues - admitted as much in a statement released to Rivals.com in August: "As Red Bull Energy Drink has not been formulated to deliver re-hydration, we encourage people who engage in sports also to drink lots of water during intense exercise." Red Bull officials also claimed their beverage has a lower caffeine level than many of its competitors, adding that it "has been proven to be safe and to help athletic performance."

"Most companies are not advertising these things as anything other than what they are," Dolan says. "They're advertising them as energy-boosting drinks, and that they are. They have never said the drinks are to be used as fluid replacements. But when you say 'energy drink' to teenagers, they're assuming it is going to be good for the body, that it's going to give them an extra something. They don't consider the difference between energy drinks and sports drinks. It's an educational piece that we've got to hammer on."

While there is no way the VHSL can mandate that all student-athletes at its 316 member schools stay away from energy drinks, the league's statewide ban would serve a greater educational purpose, Dolan says. "There is a certain amount of liability that goes along with allowing those drinks," he says, adding that the vast majority of member schools comply with liability-related guidelines. Regardless of whether an official ban is enacted, the league's website is expected to be updated with revised fluid replacement recommendations and, most likely, a document comparing and contrasting energy drinks and sports drinks. "I believe this will not be the end," Dolan says. "We won't put out this information, say that we've done our job and move on."

Meanwhile, the education of Fairfax County student-athletes continues. The repercussions for those caught consuming an energy drink vary by school and typically range from tossing the drink in the trash to serving a one-game suspension - but not without the situation becoming a teachable moment first. "Just to say you can't do something is not providing any understanding, and without the understanding, you usually don't get the compliance," Almquist says. "We want this to be a positive educational opportunity, and that goes for people from outside our county, as well. We try to spread the word to other athletic programs we compete against and let them know that when they come here, they should leave their energy drinks at home."