Ashleigh Clare-Kearney was not a typical high school gymnast. At 5 feet, 4 inches, and 155 pounds, her physique stood out in a sport often unkind to girls taller than 5-foot-2 and heavier than 115 pounds - a fact not lost on her coaches. 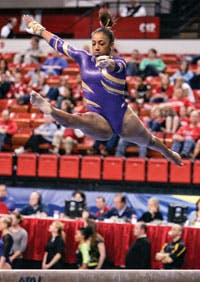 Ashleigh Clare-Kearney was not a typical high school gymnast. At 5 feet, 4 inches, and 155 pounds, her physique stood out in a sport often unkind to girls taller than 5-foot-2 and heavier than 115 pounds - a fact not lost on her coaches.

"I was told that I needed to lose weight in order to be successful, and that no college was going to take a chance on me because they would look at my weight as a risk," says Clare-Kearney, now 25, who trained at the same private gymnastics club in a small Connecticut community for 13 years, between the ages of 5 and 18. "It was frustrating to hear that all the time, and I felt like I was being personally attacked and criticized. But I actually was successful in high school; I was very successful. And since I was successful, what was the issue? Why did it matter what I put in my mouth or how much I weighed?"

Clare-Kearney was a perennial state and regional champion in high school and competed nationally. She then earned a scholarship to Louisiana State University, where she eventually won two national championships and was named Southeastern Conference athlete of the year in 2008. So she says she didn't let the criticism from her coaches in high school change the way she ate and exercised.

But too many high school student-athletes - both male and female - do let those kinds of comments get in the way of success. They restrict their food intake or engage in improper dieting, resulting in unhealthy lifestyle habits, eating disorders and poor athletic performances.

"Coaches or other people tell athletes they have to reach a certain weight or look a certain way to be successful, and then they don't know what else to tell them in the way of guidance," says Paula Sammarone Turocy, chair of the department of athletic training at Duquesne University and the lead author of a new position statement from the National Athletic Trainers' Association on "Safe Weight Loss and Maintenance Practices in Sport and Exercise." "So the kids read magazines or watch TV and try to figure it out on their own, and they end of up doing things that perhaps aren't the best for people who are still growing. This is a much bigger issue than most people realize."

The NATA position statement, written by a team of physicians and certified athletic trainers and published in a recent edition of the association's Journal of Athletic Training, seeks to bring the issue into greater focus. It presents recommendations for safe practices, as well as guidelines for coaches and parents that will help student-athletes and other active individuals achieve and maintain healthy weight and body-composition goals.

"Sometimes, it's just the littlest comment that can set someone off toward bad eating habits or improperly maintaining their weight," Sammarone Turocy says. "Coaches and athletic directors have a strong influence on kids, and if you talk to kids positively about exercise and diet, that'll be something they will carry with them for the long haul."

Gymnasts, wrestlers, swimmers, divers, cheerleaders and participants in other sports in which the body is exposed and appearance is critiqued might be the prime candidates for unsafe weight loss. But all high school student-athletes and coaches need to be aware of safe eating and weight-management habits, according to Sammarone Turocy. She can tell plenty of stories about good intentions gone bad - including the 16-year-old female field hockey goalie who decided to become a vegan and cut too much fat out of her diet. "She was a very bright girl," Sammarone Turocy says. "She thought she had it all under control, but she took it to the extreme and was not eating enough food."

The NATA position statement is designed to prevent people from developing eating disorders (the subject of a 2008 association statement). "Body weight and, more specifically, fat and muscle, will impact someone's health - whether an athlete or a member of the general population," Sammarone Turocy says. "If we can get people to learn to eat correctly and maintain their body within safe normal limits, they're not going to have those extreme fluctuations in weight and performance. Our suggestions are designed to be preventive in nature."

1.) A body-composition assessment, which is a scientific and objective method of estimating lean body mass and fat mass, should be used to determine a body weight consistent with safety, good health and optimal performance in weight-classification sports. This process takes no longer than 10 minutes, Sammarone Turocy says, and should be administered by a trained individual.

2.) Progress toward reaching the target weight based on body-composition tests should be assessed at regular intervals by repeating the tests.

3.) Weight gain or loss should not occur at excessive rates; it should be steady and at a consistent and safe rate (one or two pounds per week for weight reduction). Additionally, weight loss should not exceed 1.5 percent of body weight per week.

4.) Both diet and exercise should be used as part of the strategy to change body weight. Weight management should follow the training plans and goals of athletes and other physically active individuals.

5.) Enough calories taken in from all food groups should occur during weight change. Metabolism and energy needs for physical activity must be considered in developing the diet.

6.) Education on safe dietary and weight-management practices should be conducted on a regular and planned basis, and the involvement of trained nutrition, health and weight-management experts such as athletic trainers or other health professionals is highly recommended. Coaches, peers and family members should not provide information or participate in diet, body-composition or weight-management practices, and they should refrain from making comments about them. "Coaches can be supportive, but it is their job to bring in someone else to provide the education," Sammarone Turocy says, adding that certified athletic trainers and local pediatric or orthopedic physicians are ideal for that task.

7.) Athletes should be cautious with the use of dietary supplements and ergogenic aids for weight management, or any techniques that lead to rapidly changing body weight through unsubstantiated methods of weight reduction. Consideration of a sport's governing body's ruling on such supplements must be given. (The NATA currently is working on a position statement regarding supplements.)

Clare-Kearney, who has a master's degree in sports management and just completed her first year of law school, calls the seven recommendations a "great starting point." But, like education efforts about concussions and hydration, "it's one of those things that has to be pounded into people's heads constantly and consistently to help them remember."

"Until a school or an athlete or a parent decides that this is an important issue, they're probably not going to pay attention to things like body-composition assessments," adds Sammarone Turocy. "But they need to know that there could be long-term health implications for kids if they don't."

Clare-Kearney is now a volunteer assistant gymnastics coach at LSU and is using her experiences to help her athletes and fellow coaches. "My age and my lack of understanding made it feel like it was the worst thing somebody could have ever said to me," she says about private coaches telling her to lose weight years ago. "I don't think they approached it in a way that I could understand or in a way that resonated with me. It's important for coaches to get to know each athlete and his or her sensitivities. A lot of what they say when it comes to weight can be misinterpreted and taken so much more negatively than it's intended. So the approach is key."