The potential of a major incident at your facility can keep you up late at night. While it may seem futile and fruitless to work through incident scenarios in your mind, it is often the first step toward preparation, training and gaining the support necessary to handle any issue. In my career as a facility manager and athletic administrator, I have encountered a variety of real-life emergency scenarios, including:

PLAN OF ATTACK
This past year, our facility converted a softball field on our complex in Hillsboro, Ore., to a 3,600-seat Single A professional baseball stadium. This new facility matched an existing 7,200-seat football, soccer, lacrosse and softball/baseball stadium next door.

The conversion came with numerous safety challenges, including the high volume of spectators. The team that we partnered with, the Hillsboro Hops, had approximately 135,000 spectators eager to support the only professional baseball team in the Portland metro area. Having so many fans pass through our facility over such a short period of time caused us to reexamine our current emergency and evacuation plan so that we would be ready for any scenario our facility faced.

Our reflections on our readiness for emergency and evacuation planning led us toward a several-month effort that involved full- and part-time staff, first-responders (police and fire), city staff in emergency management, and school district personnel who frequented our facility. We had a fairly simple existing plan to work from, and after finding an example, we began the process of creating and refining a practical and hands-on emergency and evacuation plan.

The first step was getting some practical training for all of our full-time staff so that, at a minimum, we were up to speed with the latest first aid, AED and CPR training. The next part of the process focused on the exact type of emergencies we might actually encounter at our facility. We made a list and then researched preferred ways of dealing with these emergencies. The list we developed contained the following scenarios:

Following the creation of this list, we identified what immediate reaction to each incident would be, who was responsible for what, and how the city and first-responders were to be involved. This work was continually shared with the fire and police departments so that we were able to get immediate feedback, reach agreement and come to final conclusions.

We included current drawings of each facility from which we might call for EMS assistance. This map needed to include the location of each exit, AED, first-aid supply and fire extinguisher. We asked our staff to walk the site and know the locations of these key areas. These maps are key for first-responders, as well, to know and have as reference materials.

The plan we developed has several pages related to evacuation protocols, including three distinct evacuation strategies:

Depending on the severity of the situation and advice shared by EMS professionals, each scenario we developed had a specific plan. For example, if we were in the middle of a baseball game and there was a fire in one of the concessions stands, it would not be necessary under normal circumstances to evacuate the entire stadium, or to stop, postpone or abandon the game. However, this is not something we could decide without being in the middle of the situation at the time.

Evacuation success is dependent on two key factors: Training of the staff for the related emergency, and a clear expectation that people are to be evacuated to a safe dispersal area and an understanding of where that area is located. In our plan, we developed a chart of potential hazards with a likelihood of occurrence and a decision listed in terms of evacuation, shelter in place or relocation.

TRAINING DAY
Once you have created a written plan for emergency and evacuation procedures for your organization, you must begin training, which is the only way you can truly prepare for any potential event. This year, for example, we set up a fire drill for all staff. While this was only the beginning of training toward our objectives, it was a start in actually having the alarm pulled and discussing our goals and jobs related to this event as if it were actually happening.

Communication in the midst of chaos, noise and stress as we begin moving fans from the facility to a safe dispersal area onsite is critical to the success of any incident response, and such communication must be talked about well in advance of an incident happening. Each area of the facility was covered in planning for an evacuation. Employees in the communication loop included the full-time staff onsite at the time, part-time faculty staff, concessions staff, press box staff, the PA/scoreboard operator, maintenance staff and gate attendants/ticket sellers. Only when each person is aware of his or her responsibility during an event emergency will he or she be able to fulfill expectations. Without realistic training, however, plans are just ink on paper and will not hold up during a time of crisis.

Developing your own successful emergency and evacuation plan starts with a realistic assessment of the potential challenges you might face based on your specific facility. Getting appropriate feedback from those who will be most intimately involved when an emergency arises is critical to the success of the overall plan. Organizing your work into a tight package that includes facility drawings and key contact information will be helpful as you move toward the training phase. While this work may not ward off any of these incidents from happening, it will prepare you and your staff for whatever may come, and when an emergency arises, your staff members will be ready to jump in and take care of things to the best of their ability. 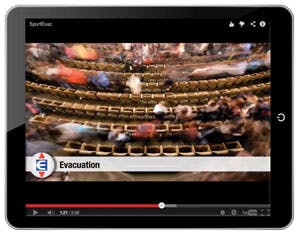 Courtesy of the Department of Homeland Security

The National Center for Spectator Sports Safety & Security (NCS4) at the University of Southern Mississippi has developed large venue evacuation simulation software called SportEvac™. Using blueprints from actual stadiums, developers have created virtual, 3-D stadiums that can simulate as many as 70,000 fans in the form of avatars — animated "humans" that respond to threats as unpredictably as actual humans. The software not only simulates how fans will respond to an emergency, but also workers, first-responders and even objects, including fire trucks or a fan's car. The software helps answer key questions, such as: 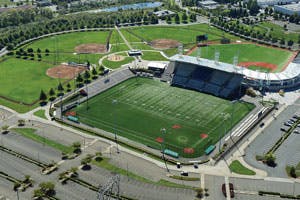 Kevin Bryant (kevin.bryant024@outlook.com) is senior facility manager for the Gordon Faber Recreation Complex for the City of Hillsboro Parks and Recreation Department in Hillsboro, Ore.