When thinking about venue security, R2-D2 is likely not what comes to mind, but that could change.

Knightscope, probably the most prominent player in what is still a small market, hopes its cone-shaped rolling security robots will catch on as a high-tech surveillance option. The company's robots are already being deployed in shopping malls, Silicon Valley offices and large sporting venues. Sacramento Kings fans who attend games at the Golden 1 Center might have caught sight of that facility's unofficial mascot — a Knightscope robot that's frequently featured on fans' social media accounts. Friendly, fearless and as vigilant as their battery life will allow, robots are slowly but surely taking on the role of security guard.

Although the K3 and K5 models are capable of faster speeds, Knightscope says they primarily operate in the 1- to 3-mph range under normal circumstances. The machines are programmed and operated from a browser-based dashboard and are designed to monitor their battery life and return to a charging station when they run low on power.

But perhaps their greatest asset is that they're simply not human.

"I think it's pretty easy for people to relate when you see the mall security guard," says Stacy Dean Stephens, vice president of marketing and sales at Knightscope, when asked about some of the advantages of enlisting robots for security. "There's a couple things you see. You see the gentleman who is unkempt, doesn't tuck his shirt in, not entirely brand enhancing, not necessarily on top of his game in terms of what he's capable of reviewing."

To be fair, Stephens' description may be a bit of a stereotype. Obviously, there are some excellent security guards out there, but none who can overcome being a flawed human being, limited by Homo sapiens' physiology and psychology. Human guards only have two eyes and a memory with limited capacity. As far as temperament, when presented with a threat or crisis, it's possible a human guard could be paralyzed by fear or react irrationally — which is to say nothing about the monotony of security work. Often guards are the first and last line of defense in multimillion-dollar facilities, and yet they're woefully under-incentivized. According to PayScale.com, the average security guard makes between $8 and $15 per hour, with an average annual salary somewhere around $30,000.

Stephens contends that in terms of surveillance and data collection, robots cannot be beat. "The memory capability of a human being isn't anywhere near that of a machine," he says. "Each one of our robots has four cameras that are capable of reading 1,200 license plates a minute, that a user can then recall two weeks later, and they can do that at any given time."

Vigilant as they might be, a robot's presence alone might be a sufficient deterrent. "If you take the data out of the equation, and you're just looking at force multiplier effect, the machines are constantly on patrol," Stephens says. "Their visibility — being five-feet tall, three-feet wide and anywhere from 350 to 400 pounds, depending on the model — they're quite conspicuous. Bad guys don't like to be caught on video, so you're really expanding the visibility of your guard force."

In terms of cost, Knightscope robots are leased rather than owned. The company is vague on pricing, saying it tailors plans to a given customer's needs. Stephens says even smaller venues, such as high schools, can afford a Knightscope robot. "If you talk to anybody in security, cost never comes up, because it's so much less expensive than having guards," says Stephens. "That's never a discussion point that we have. Do I think that high schools could benefit from this? The answer is unequivocally yes. That's actually part of the company's foundation. We wanted to help out in situations where patrols in schools were amplified. Do I think the price is going to come down? Probably the other way around. I think the price will probably stay the same but the feature set will continue to grow." 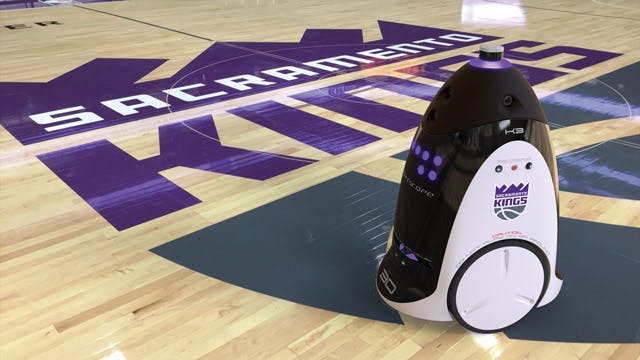 The NBA's Sacramento Kings have embraced robotics as another line of defense in securing the Golden 1 Center. [Photo courtesy of Knightscope]

Surveillance of Kings
Perhaps the best endorsement for using robots as security guards lies in the fact that large-scale facilities are already using them to supplement their existing security strategies.

"The Knightscope robot supplies our safety and security teams with another set of reliable, consistent data," says Ryan Montoya, the Sacramento Kings' chief technology officer. "The Knightscope identifies a baseline of what is normal for the arena environment and autonomously patrols the concourse looking for deviations from that baseline — for example, if a bag is left where there normally isn't one, or there is elevated heat or CO2 levels in a certain area."

Stephens agrees that at least for now, robots are only one piece of the equation. "This is software plus hardware — plus human. This is not a one-to-one replacement. We are not going to replace all the guards, but what we can do is give them the tools they need to make better decisions and do that through alerts. We can make guards happier in their jobs, safer in their jobs, because now they have the tools they need to do their job better."

Knightscope says its clients are already seeing results. Stephens cites the example of a client that averaged two criminal activities a week between January and September of 2016. The crimes ranged from criminal mischief to assault. "Since we've deployed our robots, that number has dropped to absolutely zero," Stephens claims. "The robots mitigate that decision process. The bad guys decide, 'You know what? I can do business elsewhere, and I really don't know what these robots are capable of, and I really don't want to find out while I sit in jail tonight.'"

The hope is that robots can help out in an event as small as recovering a fan's lost item to something as ominous as a terrorist attack. "If anomalous levels of heat, smoke or CO2 are detected, then a major threat can be avoided," says Montoya. "These are threats that may be harder for a human to detect, but are still major. It's always helpful having another set of eyes around the arena at all times so that we can react both smarter and faster to both minor and major threats." 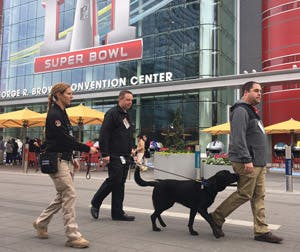 For some security experts, technology is no match for the nose of a canine. [Photo courtesy of MSA Security]

Security's best friend?
Jeffrey Miller is senior vice president of MSA Security, which provides everything from consulting services to explosive-detecting dogs. Miller spent 24 years with the Pennsylvania police and was formerly senior vice president and chief security officer for the National Football League.

Miller says technology continues to evolve, in some cases driving entirely new approaches to security. When he started with the NFL in 2008, the league was still doing manual pat-downs at stadium entrances, which eventually evolved to the use of handheld metal detectors and finally the generally frictionless use of walkthrough metal detectors. That said, Miller hesitates to crown technology a security panacea.

"The federal government has spent literally billions of dollars trying to replicate a canine's nose and ability to detect dangerous articles or substances or explosives, and really hasn't been able to do it," Miller says. "So, to me, in what I have seen on the ground all over the world, you really can't beat the canine."

Robots, Miller concedes, could be useful, suggesting that there "will be and there always are technological improvements that help with security." One of the areas in which Miller believes technology will play a role is in mitigating the threat from another kind of robot — the Unmanned Aerial System (UAS), otherwise known as a drone. "I think technology can and will play an important role in detecting and disrupting potential drone UAS attacks that could be perpetrated by carrying a larger payload, or the threat of multiple UAS platforms at one time coming toward an outdoor venue," Miller says. "One way or another, I think there's a technological solution there that's going to aid event organizers and police in detecting those kinds of attacks at large-scale outdoor venues."

To be sure, technology is part of what will keep us safe from the bad guys. However, it's probably also a mistake to envision robots as completely infallible. In July, a Knightscope robot decided to take a break and cool off while patrolling outside a Washington, D.C., office building. More specifically, the Knightscope K5 model landed in an outdoor fountain and had to be fished out by human security guards.

A frictionless, friendly solution
As human beings, we're inclined to project a personality onto almost anything. (Think Tom Hanks' character befriending a volleyball in "Cast Away.") Knightscope and its clients are well aware that robots are as much an attraction (and branding opportunity) as they are a deterrent.

"Our robot is certainly intriguing to visitors when we tour them around the Golden 1 Center," Montoya says, adding that he expects robots will be coming to more venues in the future.

Stephens agrees. "If you just do a cursory search of social media, I think you'll find that the fans have embraced it. The Kings were the first organization to conduct a Facebook Live during one of their games through a robot. It's become its own kind of mascot."

Aside from being seen as friendly novelties, robots are also frictionless. They add to the fan experience, as opposed to detracting from it, which is part of the balance sought in providing security for any modern facility.

Miller says that he's always on the lookout for new ways to "screen people, where they don't even know they're being screened. You're not slowing them up at all, so you're really not impacting their fan experience. But we're not there yet."

Whether robots are an ideal surveillance solution or a passing fad is still very much up for debate, but given the kinds of threats seen at venues around the world, humans would be wise to consider any help they can get.

This article originally appeared in the September 2017 issue of Athletic Business with the title "Robots May Be the Next Line of Defense in Venue Security" Athletic Business is a free magazine for professionals in the athletic, fitness and recreation industry. Click here to subscribe.