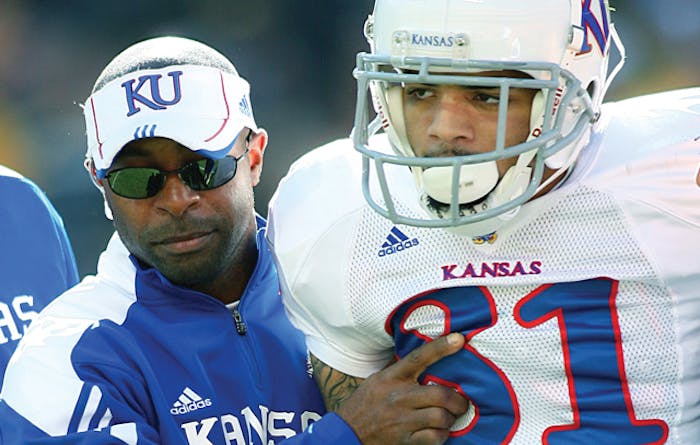 A one-time cornerback at Quincy (Ill.) University, Murphy Grant set his professional sights on becoming a head athletic trainer at the major college level. Now in his 13th year at the University of Kansas, Grant not only serves as associate athletic director for sports medicine (working football and overseeing all other sports), he also was sought out to serve as the first-ever executive chair of the National Athletic Trainers' Association's Intercollegiate Council for Sports Medicine, a restructuring and expansion of NATA's College/University Athletic Trainers' Committee approved in January 2017. In the wake of the heat-related death in June of University of Maryland offensive lineman Jordan McNair, AB senior editor Paul Steinbach asked Grant about the high-stakes responsibilities of today's collegiate athletic trainer.

Is there a reason you wanted to chair this committee?
I always wanted to be on the College/University Athletic Trainers' Committee, so I was actually looking at one point in time just to become a member. So when it was brought up to me about being the chair, I couldn't believe it. It was an opportunity to lead a group of really good and sound athletic trainers who are passionate about the field. This is my profession, and I love it, so I want to make sure, at least in my capacity over these next few years, that I can continue to move forward with how healthcare is delivered and continue to promote the profession of athletic training at the collegiate level. It's important to me.

What about the profession do you love most?
Everything. I am in a position to affect the lives of 18- to 22-year-olds, hopefully in a positive way. I'm in charge of their healthcare. That's one thing. I get to watch sports every single day. I get to travel all over the country. There's nothing that's more special than those student-athletes who have graduated 10 or 15 years ago and they still call you and they see you, and when they come back on campus they love on you just like they were still here. You just develop some really cool relationships with the student-athletes — whether they were injured or not. We're here to take care of them no matter what the situation is — a death in the family, if they are sick. I just think it's important for them to have someone like that who will care for them yet push them, be 100 percent honest with them and really help them grow.

Is athletic training starting to get the attention it deserves at the high school level?
It's been a work in progress. We as a profession have been really trying to stress the need for it. There are so many high schools around this country, from really small rural high schools to very large high schools, but athletics are still the same. We want to make sure that the health and safety of the adolescent and the teen is there and all these individuals have access to have healthcare as they participate in their sport. There was a time we would get some athletes who came to the collegiate level who had never had an athletic trainer. It was foreign to them.

Do you still see that?
We do see it, but not as much as in the past. I think a lot of individuals are seeing the need for it. There are different types of settings. Maybe you're employed by the high school. Maybe you're employed by a clinic and you're doing some outreach, so there is some athletic trainer coverage. But there are still plenty of high schools out there that do not have any type of athletic trainer or medical care.

Why not?
Who would know the reason that some schools don't have athletic trainers, but I think paying someone a good annual salary definitely outweighs risking a death or some type of catastrophic injury, because it happens. Obviously, kids are still dying in 2018, so the need for health and safety is paramount right now, and we know that athletic trainers save lives.

What are the greatest health risks facing football players today?
I think the biggest issues that could be potentially catastrophic that student-athletes have to be concerned about are heat illness, sudden cardiac death, exertional sickling and asthma. If you look at some of the catastrophic things that have occurred, pretty much all of them will fit into those categories.

Have athletic trainers come under greater pressure to make the right call regarding concussion diagnosis and return-to-play decisions?
No, I wouldn't say there's been any increase in pressure. As an athletic trainer, we practice sound medicine, and we want to make sure that we do what's right for a student-athlete. In the college and university setting, institutions are required to set a structure of unchallengeable authority when it comes to diagnosing, managing, treating and returning the student-athlete to play, so that helps the athletic trainer nowadays. But a sound evaluation — making sure that it is patient-centered, athlete-centered health care — that is the most important piece of what we do.

How would you describe the typical dynamic these days between coach and athletic trainer?
I think the dynamic is actually really good. We're on the same team. We wear the same colors. We work at the same institutions. When recruiting, they sit in the homes of young men and women and talk to their parents about bringing them in, and then we're the ones who have to take care of those individuals. So I think it's important that everyone is on the same page and working for the same goal. There definitely has to be a level of trust there, back and forth, and as long as the athletic trainers are doing their jobs and practicing sound medicine, I'm not sure the dynamic changes or the pressure increases.

Where do you come down on the position held by some that kids shouldn't play tackle football before high school?
I honestly haven't really paid much attention to it. What I honestly really care about — and not that I don't care about that, because eventually those kids will be on my campus — but I have 547 athletes. I am the chair of this committee at a time kids are still dying at this level, so if there are some different things we can do as athletic trainers, being able to speak to you about helping this movement and protecting our student-athletes, then that's kind of what's on my mind instead of the tackle football.

What's the most heartbreaking injury that you've ever been witness to during your career?
You ask that question and many athletic training students ask me that, and I think that it varies. You see some super gruesome injuries, and you're just like, "Oh, my god. Did that just happen?" But there are also those injuries that aren't as bad but the student-athlete still can no longer play. These kids are so passionate about playing and they sacrifice so much and we do a cardiac screen on him and find out that they have a condition that they can't play football anymore and they're devastated. Or injuries that really stop them from doing some of the things that they have wanted to do. If you lose a life, that is 100 percent devastating, but there are also some of those injuries that change lives. And those are serious, too. We treat them all seriously. We want to make sure that we are providing something special to our student-athletes — great healthcare — regardless of injury.

What's a typical workday for you?
I'm an early bird to begin with, so right now I'm typically in the athletic training room between 6 a.m. and 6:15. It's a Friday, so game day tomorrow, and I'll be out of here maybe by 4, but other days during the week it's 7:30, 8 o'clock. It's a lot of time. We put in a lot of hours, again, just to make sure that we're available. But it's also important that we take care of ourselves. Eating right, working out — all those things I think are important to keep a sound mind and body.

This article originally appeared in the October 2018 issue of Athletic Business with the title "NATA council chair focuses on student-athlete healthcare." Athletic Business is a free magazine for professionals in the athletic, fitness and recreation industry. Click here to subscribe.