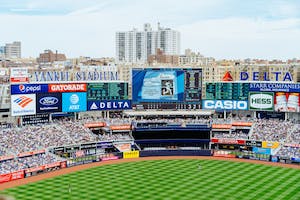 The prospect of a full Major League Baseball schedule being completed in 2022 came as a relief amid concerns of an extended owners' lockout, but this season could still be compromised for some players.

Unvaccinated members of New York's Yankees and Mets are covered by the same private sector employer mandate that is keeping Kyrie Irving off the NBA court in Brooklyn, a City Hall spokesperson told the New York Daily News.

As explained by the Daily News, mayor Eric Adams repealed the Key2NYC vaccine mandate covering indoor spaces like gyms, dining and entertainment on Mar. 7. But Irving remained ineligible to play under a separate regulation: A private employer mandate put in place by the de Blasio administration on Dec. 27.

The spokesperson cautioned that mandates could shift with the state of the pandemic, but said that the city would not be carving out individual exceptions. The fact that the baseball teams play outside has no bearing on the mandate, the spokesperson told the Daily News.

Unless the mandate changes, unvaccinated members of the Mets and Yankees would not be eligible to play home games, in addition to road games in Toronto. “We have to worry about the health of almost 9 million people. No one is trying to hurt Kyrie Irving or a Yankees player,” the spokesperson said.

“On behalf of the Yankees, [team president] Randy Levine is working with City Hall and all other appropriate officials on this matter,” the Yankees said in a statement. “We will have no further comment.”

According to the Daily News, it’s unclear exactly which players on New York's MLB teams are unvaccinated, but Yankees superstar Aaron Judge is widely believed to have not received the shot. When news came out that unvaccinated players could not play road games in Toronto, it was reported earlier in the week that Yankees manager Aaron Boone said, "We still have a few guys at least who are unvaccinated." MLB Network insider Jon Heyman tweeted that the Yankees "would miss a chunk of the middle of their order," implying star hitters other than Judge were unvaccinated.

The Mets were among the league’s least vaccinated teams from a season ago, falling short of MLB’s 85 percent threshold to loosen COVID-19 protocols, according to the Daily News.