A Wisconsin man who had a heart attack at a game between the Milwaukee Brewers and the Washington Nationals is now thanking the fans who saved his life.

John Clements, 58, attended the June 11 game at Nationals Park with his family.

When he went into cardiac arrest during the game, two bystanders rushed to his aid and began performing CPR. Clements was breathing by the time he was carted out of the stadium, and he would later have a stent place in his right coronary artery. He spent three days in the hospital.

"I'm remarkably better," Clements told the Milwaukee Journal Sentinel. "The only pain I have is the pain that saved me. I can feel it in my chest plate from the CPR and the shocks. I'm better day by day, though. It's pain that I can put up with for the rest of my life."

Clements has 38-year-old fire department captain Jamie Jill and 32-year-old emergency room nurse Lindy Prevatt, to thank for their help during the emergency.

Jill and Post didn't know each other, but Jill said the pair worked "seamlessly" together to "give this guy the best shot we could."

Clements' wife, Rhonda, said she knew something was wrong when she heard her husband grunt and then begin turning blue.

"Within a second, a man came, a spectator, asking if he was OK," Rhonda said. "Within a couple seconds more, they all had him down on the ground performing CPR, and it just happened so fast. I felt like I was watching an episode of 'ER' or something. In the background, I could see the game going on. 'This is unbelievable how this all happening right now.'"

Stadium personnel cleared the two sections of seating to allow for space. Rhonda and their two sons were led to another area while emergency responder performed CPR.

John said he hasn't had a chance to personally thank Jill and Post for their help just yet, but he's going to change that.

"I'm going to," he said. "If I have to fly back out there, I am going to get to them, look them in the eye and say thank you, shake their hands and (try) not to cry." 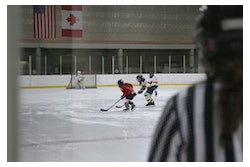 Emergency responders were called to Highland Park in the town of Union at about 12:05 p..m. Friday for a reported drowning. When they arrived the boy had already been pulled from the pool by lifeguards who were performing CPR.
June 20, 2022
Legal

The Michigan Supreme Court on Friday rejected a final appeal from sports doctor Larry Nassar, who was sentenced to decades in prison for sexually assaulting gymnasts, including Olympic medalists.
June 17, 2022
Safety & Security

A Golden State Warriors fan has been banned from San Francisco's Chase Center for posing as Warriors shooting guard Klay Thompson and participating in a shoot around for about 10 minute prior to Monday's NBA Finals game.
June 15, 2022
Safety & Security

Watch: How to Prevent and Treat Heat-Related Illness

As the thermostat rises, athletes practicing in the summer are at risk for heat-related illness and even heat stroke. Here's a step-by-step guide to cold water immersion treatment for exertional heat illness or heat stroke. There is a 100 percent survival
July 2, 2019
Aquatics

A man was rescued from an Omaha community pool over the weekend after a caller reported a person drowning at Hitchcock Park Swimming Pool.
June 13, 2022
Safety & Security

Rose-Hulman Institute Of Technology in Terre Haute, Ind., confirmed Wednesday that an incident of racial abuse occurred on the part of Rose-Hulman softball players toward players on Oberlin College's team.
June 10, 2022
Safety & Security

A basketball official in New York was injured when he was attacked by a player after a game, according to reports
June 9, 2022
Page 1 of 211
Next Page
AB Show 2022 in Orlando
AB Show is a solution-focused event for athletics, fitness, recreation and military professionals.
Learn More
Buyer's Guide
Information on more than 3,000 companies, sorted by category. Listings are updated daily.
Learn More