Ohio State's football stadium, which officially opened its doors on Oct. 7, 1922, will recognize a new historical marker at the facility's upcoming centennial celebration.

According to NBC4, the marker was already installed in front of the stadium, which is affectionately called "The Horseshoe."

The bronze plaque is located outside of Ohio Stadium's rotunda and features an outline and shape of the state of Ohio at the top, and a picture of the Oct. 21, 19222 dedication on the left--hand side. The plaque also recognizes Howard Dwight Smith and E.H. Latham Company, the stadium's architect and contractor, respectively.

At recent press conference, head football coach Ryan Day shared some of his favorite memories at the stadium.

“I think the Penn State game in 2018 was one of my greatest memories being down three scores during the fourth quarter. That blackout was unbelievable," Day said. “Even pregame you know, just the excitement of being in that stadium. But I'd say probably my two favorite things are to listen to the crowd after a touchdown or listen to the crowd after a third down sack or stop. Those are my two favorite things because that's what I think the stadium is the loudest. We look back on those times, it makes you smile.” 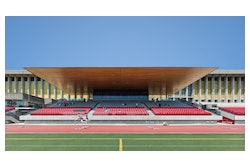 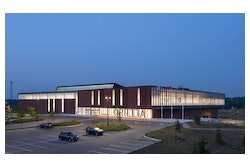 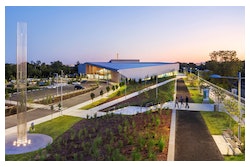 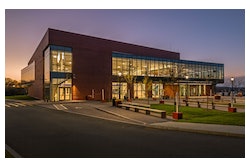 More in Facilities of Merit

The opening of the new SFU stadium is the culmination of a vision that was born alongside the founding of the university, when its first chancellor insisted that a gymnasium and playing fields be included in the architectural competition brief to...
September 30, 2022

The College of Holy Cross’ Joanne Chouinard-Luth Recreation and Wellness Center is a state-of-the-art hub for collegiate recreation, wellness and intramural sports located on the school’s upper campus. It is a breakthrough project for the institution...
September 27, 2022

Woven into the picturesque, undulating hills and wheat fields of the Palouse region is the pride of the University of Idaho: a stunning, mass-timber-designed arena built to offer vibrant, intimate fan experiences for years to...
September 26, 2022

William Penn Charter School, the oldest Quaker school in the country, strives to create a learning environment where arts and athletics flourish side by side with scholastic achievement in support of its vision of “educating students to lives that make...
September 23, 2022

Nestled within the vast wooded expanse of northern Wisconsin lies “thayék ėthë dnêkmëgzêk myéw,” the place where everybody plays. The catalyst for building a new community center was born out of great...
September 22, 2022

The Norton Healthcare Sports and Learning Center is a landmark facility for the Louisville neighborhood of Russell, where one in three residents live below the poverty line. Once known as “Louisville’s Harlem,” the neighborhood is home to generations...
September 20, 2022

2022 Facilities of Merit Winner: The Powerhouse at Beloit College

Looking to enhance the student experience and help revitalize the local riverfront, Beloit College purchased a former coal-burning power plant with intent to develop it as a student union centered on recreation and...
September 20, 2022

With a flowing roof structure and site circulation patterns referencing the landscape of Richmond as a river delta city, Minoru Centre for Active Living has a unique focus on supporting wellness for all ages ...
September 19, 2022

"Elevating Facilities. Enriching Programs. Empowering Leaders." That phrase is at the heart of what Athletic Business strives to do — our mission. Next month, Nov. 7-10, professionals from all corners of the athletics, fitness and recreation industries wi
October 11, 2018
Page 1 of 1
Buyer's Guide
Information on more than 3,000 companies, sorted by category. Listings are updated daily.
Learn More
AB Show 2022 in Orlando
AB Show is a solution-focused event for athletics, fitness, recreation and military professionals.
Learn More