As summer temperatures climb across the country, so too does attendance at recreational pools. Especially for seasonal-use pools, the apex of summer presents a peak in revenues. It's also about the worst possible time to have to shut down for unexpected repairs. But for facilities with a preventive-maintenance plan in place, it's nothing to sweat over.

A preventive-maintenance plan is among the recommendations found in the Model Aquatic Health Code, which celebrates the one-year anniversary of its release this August, but it's also a common-sense tool for many aquatic operators — or should be. "Maintenance is one of those things that people typically don't pay much attention to, because as long it's working, they don't worry about it," says Alex Antoniou, chief marketing and information officer with the National Swimming Pool Foundation. "Then it breaks down, and they have to scramble to replace or fix it. That's never a good approach to have, especially when a facility relies on membership or entry fees."

A better approach? Have a comprehensive, up-to-date preventive-maintenance plan, and stick to it. Here's how to put it together:

STEP 1: TAKE INVENTORY
This is best done when a facility first opens, but it's never too late. "Perform an inventory of all the equipment used and then develop a list and schedule of maintenance items," says CMAHC director Doug Sackett. The inventory should include a list of all the major components of the facility, as well as manufacturer and model information and specifications, local vendor/supplier and technical representative contact information, warranty information and cost.

A comprehensive list of recommendations can be found in the MAHC Annex for Maintenance and Operations, a resource Sackett encourages all aquatic operators to utilize. "The Annex is one of the most valuable tools," he says. "It's intended to be the why behind the what."

An important part of that inventory process is noting where each piece of equipment came from — and where to go to get it replaced, Sackett says. "Can you get it from a local supplier, or do you have to put an order in and wait three weeks for it? Preplanning and identification of those items is important so you don't have the downtime." 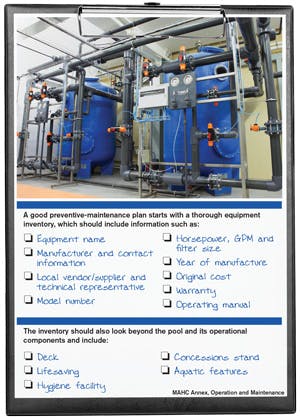 STEP 2: SET A SCHEDULE
Once an operator has a list of what needs to be inspected, the next step is to determine the frequency that each item should be checked. "The day-to-day things that you would do are part of the maintenance plan," Antoniou says. "Things as simple as water testing or backwashing your filter. But then you might have your weekly items to check — cleaning a chlorine generator cell — those kinds of preventive maintenance that keep equipment working up to manufacturer specifications."

Many aspects of the aquatic facility can be monitored constantly using automated controls that alert operators to potential issues. "We recommend some form of automation on the chemical feeders so that you don't have peaks and valleys," Antoniou says. "The automation system can turn feeder pumps on and off as the need arises based on set points. That doesn't replace the operator, but it goes a long way in maintaining consistent water quality."

Such a schedule keeps equipment working at peak performance and can lengthen its lifespan, but also it provides an opportunity to spot potential problems and plan for them. "Eventually things will need to be replaced," Antoniou says. "Have a replacement plan — yearly, or every three or five years — that replaces either equipment or parts, and budget for it."

The maintenance schedule for year-round and seasonal pools will differ. "In some respects, having continuous operation is kinder to the equipment than a seasonal operation," says Sackett, citing issues such as weatherization.

"We used to go though a long checklist of winterizing," says Terri Stroupe, aquatic director for the city of Raleigh, N.C., who oversees four year-round and five seasonal pools. "With the climate that we have, it's been mild enough that we really haven't had to do a lot of heavy winterizing. We have heaters installed in the pump rooms of our summer locations for when we have little cold snaps."

STEP 3: SET A GAME PLAN
The closing of seasonal pools offers the advantage of being able to perform repairs without disrupting programming, notes Antoniou. "As you brush and clean the tile on the pool shell, you might discover that some tiles are starting to get loose. Your replacement plan should be that at the end of the year, you drain the pool a bit so that you can replace those tiles."

While it's difficult to do the same type of major repairs to a year-round facility, proper planning allows operators to anticipate repairs and minimize disruption. A year ago, Stroupe needed to close down her largest facility for several weeks to do a significant HVAC system repair. Because the work was foreseeable, she was able to plan accordingly. "Everyone thought we were crazy doing it in the summer because that's when the facility is the busiest, but in the summer I also have five seasonal pools open," she says. "We upped their programming to take the load for the pool that was closed and were able to shift around without having a major impact."

While some maintenance tasks can be scheduled months or even years in advance, others can pop up more suddenly, and operators need to be prepared. "Sit down and think of the critical items that, if they fail, will shut down the pool immediately, or if you do continue operating, could lead to injury or illness," Sackett suggests. "Identify those areas and have a game plan and perhaps a backup."

It's part of the plan in Raleigh, says Stroupe. "For big pieces of equipment like the pump motors and chemical feeders — critical items — we have backups." Additionally, Stroupe's department has made an effort to use the same model of components at multiple pools wherever possible to reduce the number of variations necessary to have on hand. "We have a backup pump motor that will fit several of the pools, and the same for our chemical feeders."

Then there are the smaller, less-critical items that an aquatics operator should plan to have available, nonetheless. "One example I like to use is that chlorinator tubing," Sackett says. "Tubing has a lifespan to it, it wears out. It's a simple preventive measure to have spare tubing on hand and having a schedule to check and change it out."

It's not always practical to have a spare on hand for every piece of equipment or part, nor is it necessary, depending on how readily available the component might be. "Maybe it's not the whole motor, but the bearings and seals," Stroupe says. "Do we have a local place that we can go and get those things repaired quickly?"

STEP 4: SET A BUDGET
This step is particularly troublesome for municipal operations, but budgeting for major and minor repairs is integral to the success of a preventive-maintenance plan. "A lot of times facilities won't spend the money to repair something, and then in the long run they end up spending more money on a replacement," says Antoniou. "It's short-sightedness not to spend a little money on preventive maintenance."

Thus, in addition to having an inventory of equipment and a schedule for inspecting it, a preventive maintenance plan should also include a schedule for planned replacements, as well as a budget for replacing critical items. "Your recirculation pump is only going to last a certain amount of time," Sackett says. "Do you want to run the risk of having that go out on you and realize the cost of replacement, and have no plan for the funds? It should be part of the planning and inventory.

In recent years, Stroupe has made serious repairs a budgeting priority over cosmetic maintenance needs. "We've been through our annual health department inspection, and they look at the shell and ask, 'When are you painting next?' " she says, "And I tell them, 'I know it looks a little shabby, but next year. One more season.' "

STEP 5: EDUCATE YOUR TEAM
A thorough maintenance plan means nothing if it's left sitting on a shelf, or if those in charge of carrying it out aren't trained in doing so. "Particularly important for a seasonal operation, are the staff who are going to be dealing with the equipment that year familiar with it, or is it new to them?" asks Sackett. "Year-round, you probably have a main staff member who's familiar."

Such is the case in Raleigh, says Stroupe. "We have a maintenance team of four guys who are responsible for keeping up the year-round pools, as well as the seasonal pools in the summer months," she says. "I'm very blessed that way. In a lot of places, the manager also has to be the maintenance person. It's hard to wear both of those hats."

Her maintenance team works off a series of checklists created by the manufacturers for each piece of equipment. For facilities where the staff members in charge of inspection might not have the same familiarity, a more involved list is a good idea, Antoniou suggests. "You might also have a quick synopsis of what staff should be looking for on each item, and when you see something unusual, what are the steps you go through to troubleshoot? If it's the pool shell, maybe you're looking for bubbles coming through the return back into the pool. That would trigger the next item to inspect — maybe the last time you backwashed, you didn't properly seal the cover on the lint-strainer and air is being introduced and reducing flow and efficiency."

Even before putting a detailed checklist in their hands, Antoniou suggests that the employees in charge of maintenance inspections — and it may be different people for each area of the facility — be put through a basic training program to familiarize themselves with the components of an aquatic facility, as well as a site-specific in-service.

"The facility operator is going to develop the plan, but he or she may have different people in charge," Sackett says. "The operator needs to make sure the people hired to carry it out are aware of the plan and expectations, and take the time to familiarize themselves with the equipment and what to look for."

STEP 6: DOCUMENT AND REVIEW
Documenting routine inspections is important for a number of reasons, not the least of which is facility liability. "The checklist helps guide the process and helps protect aquatic facility operators," Sackett says. " 'Here's our schedule; on a weekly basis we do this.' Then line listing, initialing."

Documentation also gives operators an opportunity to spot potential problems early and act accordingly. "Maybe you notice the water level is down and you top it off," says Antoniou. "If you're doing that on a regular basis and it seems to be more than evaporation or splashout, that's an indication you may have a leak in the pool shell, the piping or somewhere in the pump room. Or you find that you constantly have to tighten the bolts on a pool ladder. Maybe it's how the pipe of the rail is sitting in the socket in the deck. If you keep a record of what you do, you can start to see trends and things that might need further attention."

A preventive-maintenance plan is not a fail-safe — it wasn't enough to predict a burst pipe at one of Stroupe's facilities the weekend before the Fourth of July a couple of years ago — but carefully structured and adhered to, it can reduce the likelihood of major incidents and keep aquatic operations running at their best.