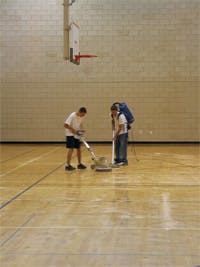 At Warner Park Community Recreation Center in Madison, Wis., the week preceding the Labor Day holiday has various nicknames, depending on the staff member.

To director Brad Weisinger, the last week in August is "Down, But Not Out Week," when the Warner Park center is closed to the public as its staff conducts annual maintenance. Weisinger's head maintenance mechanic, Kelly Wilson, on the other hand, prefers to call this period "Hell Week."

Down Week's activities are arduous, to be sure. But each task-from dusting to painting to floor refinishing-is critical to keeping the seven-year-old center in as good shape as it was in 2001, when it won an Athletic Business Facility of MeritT award. "I've always been into the idea of closing for a week," says Weisinger. "We really try to keep our building looking brand-new."

This endeavor requires year-round vigilance. In advance of Down Week, Weisinger assembles his staff to hash out a strategy for their facility's annual shutdown. "We talk about our priorities, based on our accomplishments throughout the year and the major projects we got done during the previous year's Down Week," he says. "I think it's good for all of my staff to be involved in this process because they spend a lot more time in some parts of the building than I do. They have a good feel for what we need."

The Warner Park center's list of annual maintenance tasks is generally prioritized in this manner:

In all, Down Week activities cost about $6,000. "We stay at the same level of maintenance budget requests every year," says Weisinger. "We've been pretty lucky."

Weisinger also counts himself fortunate to have a dedicated facility staff of about a dozen employees, including only five full-timers, who supply most of the labor. For part-time employees, participation in Down Week is optional, although they're paid normal wages if they choose to work.

To keep morale high through week's end, Weisinger holds a picnic on Wednesday afternoon so that his staff can "celebrate what we've accomplished," he says. "We invite our alders, our advisory committee, anyone who wants to come. Everybody brings a potluck dish and we barbeque. Plus, we bring water pistols, shoot each other and just laugh a little bit."