How to Ensure Air Quality at Indoor Aquatics Facilities

Indoor air quality is something that typically goes unnoticed — until it's bad. The reality of managing an indoor pool is that there is a high potential for the air to go very bad, resulting in a range of symptoms from moderate to severe: itchy skin, rashes, chlorine burns, eye irritation, coughing and even voice loss. Unfortunately, planning for great indoor air quality is one of the easiest things to cut in the early stages of designing and building an aquatics center. 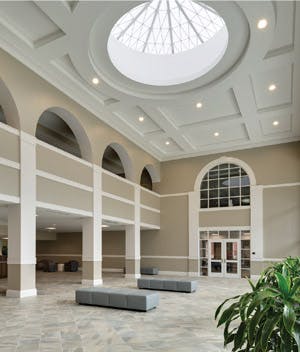 The case for clean air

Jeff Dugdale is the associate athletic director for strategic partnerships and leadership development and the director of swimming operations at Queens University of Charlotte in North Carolina, where a state-of-the-art source-capture air-quality control system has made the Levine Center for Wellness and Recreation an incomparable success.

Dugdale is well aware that his aquatic center is the exception and not the rule when it comes to prioritizing air quality, and he would like to see that change. "Everybody understands that they need something to help with the pool air quality," he says. "However, because there's not much in education and awareness, it's the easiest thing to take out, but it's the first thing they want back when they start getting feedback that the experience at the facility isn't good."

Dugdale and his team recently returned from Washington, D.C., where they spent a few days in talks with the EPA and OSHA, as well as several members of Congress, advocating for a new standard of indoor air quality nationwide. The ideal outcome would not necessarily be stricter regulations for indoor facilities, but rather to establish a best-practices standard as a starting place for new facilities. "When building a pool, we would like for there to be a healthful-environment strategy," says Dugdale. "If you had that strategy in place, it would be less likely to be value-engineered out." 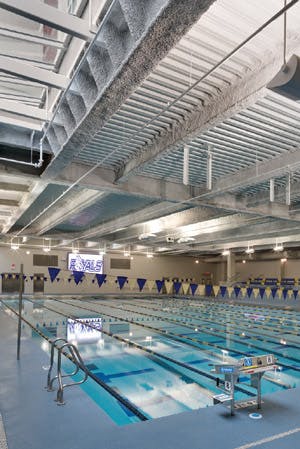 The Levine Center is inarguably an industry success story. The eight-lane competition pool sits 32 feet underground and is entirely enclosed, and yet the chlorine content is only about 900 ppm above what is typical for an open-air pool. According to Dugdale, people who frequent the basketball courts in the neighboring space are often surprised to learn that the pool even exists, having not been subjected to the typical odor of off-gassing. Says Dugdale, "We're five years old and you won't find a spot of rust because of our quality of air. It's incredible."

Dugdale readily acknowledges that Queens University of Charlotte was unusually fortunate during the planning process for the new Levine Center. "We had the luxury of being a private school and having the funding already set up so that we didn't have to make cuts," he says, though to hear him tell it, his pool evacuator still made its way across the chopping block more than once. "They didn't believe it," he says. "Now, it's been written up in engineering magazines."

Striking a balance
Balancing the air quality with other environmental factors in an aquatics center is a delicate endeavor — one that requires a number of precise systems working together to make it consistent and efficient. Hervey Lavoie is an NCARB-certified architect and president of Ohlson Lavoie Collaborative, with career experience designing recreation and aquatics facilities. Lavoie breaks down the essentials of great indoor air quality into five parts: removing airborne contaminants, reducing humidity, maintaining a comfortable temperature, controlling the migration of odors and managing the composition of incoming air. 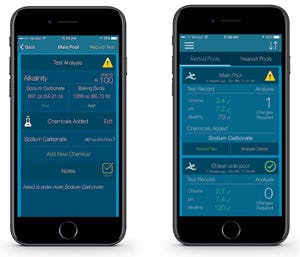 The first factor — removing airborne contaminants — deals with evacuating chloramines and other gas biproducts that form when chlorine is effectively neutralizing impurities in the water. This step is of special importance due to the fact that the heavier, contaminated air tends to settle just above the surface of the water — right where swimmers are coming up for breath. At the Levine Center, operators take pains to minimize the number of contaminants by maintaining high standards of cleanliness.

Says Dugdale, "We try to keep a clean deck by not using shoes that are being worn outside. We also educate about the importance of not peeing in the pool and have people shower before they get in, because the oils and things that come off the body can all lead to chlorine smells, as well."

Out with the old
Few will be surprised to learn that water quality and air quality are inextricably linked, though there have been new developments in the field of monitoring water quality. According to Scott Trafton, president and co-founder of Pool Shark H2O, a company that has developed a smartphone application to aid facility managers in maintaining appropriate chemical levels, "If your water quality is maintained correctly and your chemicals are balanced, then your pool area doesn't smell like chlorine and you don't have the bad air quality that is unfortunately all too common."

Pool Shark H2O launched in 2012, after an unfortunate misplacement of the required chemical log books at the Traftons' family-owned campground pool resulted in a severe scolding from the state health department. With the Pool Shark app, facility operators can enter daily (or several times daily) results from testing the water and view a water analysis telling them which chemicals to add and in what quantities.

Says Trafton, "We determined that we could actually reduce the time it took to maintain pools significantly by doing all the calculations. Now when you enter the values from your test and hit save, we instantly do the water analysis and we give easy-to-follow directions that anyone can follow regardless of their training. We essentially ensure that anyone can keep their water clean and keep their pool in compliance with state regulations."

The cloud-based system is accessible through any computer, tablet or smartphone and has expanded into use in 23 states, with more than 400 different pools managed — from hotels and waterparks to municipal recreation and private facilities. According to Trafton, users have reported significant time/cost savings, as well as reductions in chemical waste and more accurate readings resulting in less guess-and-check.

With data automatically and securely stored on a cloud-based server, the paper log — with its tendency to get soggy and distorted in the humid environment — no longer needs to be kept in storage between one and seven years, depending on the state.

The app also improves communications among staff. "We send out alerts and notifications to management and staff to keep them informed when a pool needs attention, so they can take care of it right away," Trafton says. "Often we find that facilities have lifeguards testing the pool, but they're not the ones putting chemicals in. We've eliminated the need for lifeguards to stop what they're doing and go try to track down somebody from maintenance to get them to come update the pool, because we send out those alerts."

According to Trafton, nearly half of U.S. states have established requirements for record-keeping and water quality at public pools — a good start on the kind of awareness Dugdale hopes to bring to indoor air quality. When it comes to standing your ground in the planning phase of a new aquatics facility and insisting on adequate filtration, evacuation and dehumidification, Dugdale has just one question for budget-thumpers: "What do you want the facility to look like?"

"You're going to want an environment that provides a positive experience and where you can recruit and retain good people to work," he says. "Then it makes sense that you would want to have great air quality. I would be willing to bet that people would pay more to have an experience where they were not losing their voice, where they were not getting hives or rashes, or where they didn't have to use their inhalers as much. All of that starts with an end in mind of what good looks like."

This article originally appeared in the April 2018 issue of Athletic Business with the title "The air we breathe." Athletic Business is a free magazine for professionals in the athletic, fitness and recreation industry. Click here to subscribe.