Reflecting on a Decade of VGB Compliance

With the 10-year anniversary of the Virginia Graeme Baker Act approaching in 2018 — and coinciding nicely with the average expiration date of many specialized products designed to meet the requirements laid out in the legislation — the industry looks back over a decade of compliance at the evolution of VGB attitudes and design.

In December 2008, the federal government set a new standard for pool and spa design to address the risk of entrapment posed by a strong main drain and other potential hazards. The Virginia Graeme Baker Act addresses such potential hazards as body, limb and finger entrapment, hair entanglement and mechanical entrapment with a series of required measurements and systems that constituted new industry best practices. While many of the anti-entrapment devices and systems aquatics facilities need to remain in compliance with VGB were already on the market a decade ago, designers and product manufacturers have been hard at work over the past 10 years to make the process of designing to VGB and the products available the best that they can be.

Evolution of VGB
Dennis Berkshire, president at Carlsbad, Calif.-based Aquatic Design Group, reflects on the mood of the industry when VGB was introduced. "Based on the way the thing was unfurled, it was pretty much an immediate response from most people" — particularly in the municipal sector, says Berkshire, who has been with ADG for nearly 20 years. On the municipal side, according to Berkshire, it was a matter of meeting health department officials on the doorstep who were inquiring about VGB. "I would say within the first year we had everybody looking at it, trying to come up with how they were going to comply," he says, adding, "We did have some stragglers."

When the original legislation was passed, some state health departments were faced with a new federal law and didn't move to enforce it. One thing that did help to establish the standard on a national level is that VGB allowed states to adopt and ratify their own version of the bill. For example, in Berkshire's home state of California, Assembly Bill 1020 was ratified in October 2009. "States got money from the federal government if they would adopt and ratify," Berkshire says. "Then all of a sudden, because it's a state piece, the state and county health departments would come in and verify, monitor and check on VGB compliance, whereas as a federal piece, there really wasn't anybody at the federal level who was ever going to come out and verify VGB."

RELATED: Find more solutions for your facility in the Buyers Guide

For most industry veterans, the idea of suction entrapment on the main drain was not a new concept that surfaced with the ratification of VGB, and many pools and spas were already in compliance. "For more than 20 years we've been designing pools with two main drains that are hydraulically balanced so you couldn't get sucked up against one of them," Berkshire says. "Looking at the velocity of the water through the drains, we would always design so that it was less than 1.5 feet per second — the velocity at which hair entanglement could kick in — which was kind of the old standard prior to VGB. So for the most part, our designs were already compliant."

The one exception came in the form of a new standard that required drain pipes to be a minimum of two pipe diameters below the grate as the pipes join the main drain. 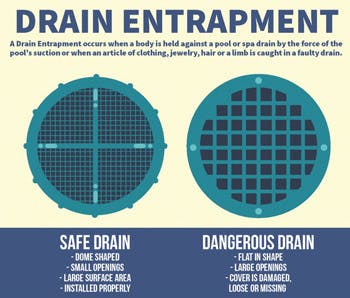 Designing for compliance
The old practice, according to Berkshire, was to build the main drain system using a concrete sump as the concrete of the floor was being set. This sometimes resulted in pipes that ran too close to floor-level. The biggest issues for compliance, then, were preexisting aquatics facilities that required retrofitting for VGB, where the problem lay with piping already set into a concrete floor. At that point, says Berkshire, there are two possible approaches: either find a way to install new pipes, or cut out the old drains and replace the entire system.

The difficulty of calculating the correct pipe positions for compliance — and monitoring field practices to ensure that the measurements are adhered to — spurred the development of a new kind of product, one Berkshire names as the biggest design change in the wake of VGB. "Probably what has changed for us the most is that whereas the common construction method had been to build the main drains out of concrete sumps with the pipe inlaid and then you fit your drain or grate over the top — because of VGB we made a paradigm shift from the old concrete system to where we now specify main drains as a complete manufactured product," he says.

RELATED: Purchasing Guide: What you need to know when buying wet-area flooring

Packaging the main drain system — complete with a drain body, pipe connection and grate — as a single, tested and certified product eliminates a whole series of tests and calculations for the designer, including pipe width, pipe dimensions below the grate and the screws that hold it all together — all of which have to be tested multiple times. According to Berkshire, specifying the main drain as a complete manufactured product also eliminates many potential variables in the field. "We feel from a construction standpoint that it gives a better margin of error, and it also gives you a manufacturer's warranty and a manufacturer's liability for the product, rather than it just being something that's field-built," he says. "Manufacturers have their listed maximum flow rates, and as long as what we have as a maximum flow condition does not exceed that, we know we're fully, 100 percent compliant." 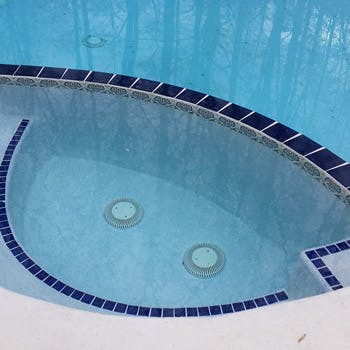 Check the expiration date
Since many of the original VGB-compliant fittings installed as a result of the legislation are nearing the 10-year mark themselves, it may be time for aquatics facility managers to take a look at their equipment's expiration date. "People went out and bought new drains — or drain covers, drain frames or grates — and we're now to the point where a lot of those are going to be at the end of their lifecycle and need to be replaced," Berkshire says. "Some clients are not aware or may have forgotten that one of the things VGB required was that, because most drains are plastic, they had to have an expiration date." Part of the original testing and certification of products for VGB involved accelerated testing to determine the shelf life of each product, and according to Berkshire, most plastic products are viable for an average of six to 10 years.

More from AB: Trends in Aquatic Design Over the Past 40 Years

The code was written with equipment degradation in mind, with particular impact on outdoor pools where plastic may dry out and become brittle. "For example, with mechanical entrapment, if you've got a necklace or a bracelet or whatever it may be, and if a product was broken and a piece is loose, something could get hooked around it and all of a sudden you're stuck and can't get out," Berkshire says. "The expiration date is intended to prevent the product from getting to the point where there is a greater propensity for it to crack or break, and then have something like that occur."

Now, nearly 10 years after the ratification of the original legislation, VGB compliance is the new normal as far as Berkshire is concerned. "I think it's kind of closed," he says. "Almost everybody in the industry has heard of VGB."

"Prior to VGB, we would take a drain fitting, find the open area and then calculate the velocity of the water going through at the designed flow rates of our pools," says Berkshire. "We knew in days of old, as long as we did not exceed 1.5 feet per second, we were within a safety threshold. In fact, for margin of error we would always design ours so that it would be less than one foot per second, even though we knew you could go up to 1.5. It's kind of the same thing now with VGB. Manufacturers have simply come up with fittings that have been designed to meet that. They've spent the money and put them through testing labs to have them certified and now it's on the shelf and ready for the industry."

This article originally appeared in the May 2018 issue of Athletic Business with the title "10 years of Virginia Graeme Baker Designing for compliance." Athletic Business is a free magazine for professionals in the athletic, fitness and recreation industry. Click here to subscribe.